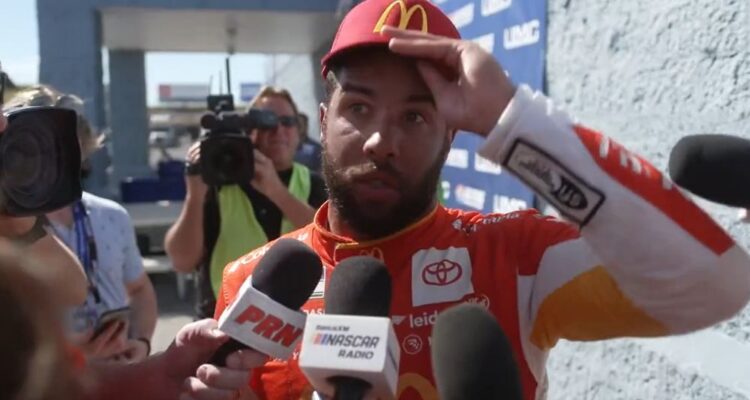 Bubba Wallace issued an apology after he attacked Kyle Larson at Las Vegas Motor Speedway during the South Point 400.

During the race, Larson had a big run coming off turn two and hoped to use it diving to the bottom of both Kevin Harvick and Wallace. He was able to clear Harvick who appeared to get out of the gas avoiding going three-wide. However, Larson was unable to clear Wallace who carried his momentum through the corner.

As they were going through the corner Larson appeared to get a little loose and chased his car up the track. The two didn’t appear to make contact, but Larson definitely limited the amount of track Wallace had to work with and the driver of the No. 45 Toyota slammed hard into the outside wall coming out of turn four.

After contact with the wall, he bounced back into Larson, who quickly attempted to avoid Wallace by diving down to the inside of the track. Wallace chased him down the track and purposely clipped Larson’s right rear quarter panel. The contact would send Larson spinning up the track into Christopher Bell and the outside wall.

Wallace would also spin up the track and smack the wall, nose first.

Following the on-track attack when the two vehicles eventually came to a stop Wallace exited his car and slowly walked down to where Larson’s car had come to a stop. When Wallace arrived at Larson’s car it appears he had some quick words with Larson before he began shoving him back into Larson’s car.

Finally, a track official arrives on the scene and separates the two drivers.

Following the race, Wallace was unapologetic claiming he lost steering.

He told NBC Sports, “Cliff’s smart enough to know how easy these cars break so when you get shoved into the fence, deliberately like he did, trying to force me to lift, steering was gone. Just so happened to be there.”

“Hate it. Hate it for our team. Fast, super fast car. Had no short run speed. As you were seeing, we were kind of falling there. Larson wanted to make a three-wide dive bomb, never cleared me. I don’t lift so I know I’m kind of new to running up front, but I don’t lift. Wasn’t even a spot to lift and he never lifted either and now we’re junk. Just a piss poor move on his execution,” Wallace added.

He then answered a question about his shoving attack on Larson saying, “He knows that what he did was wrong. He wanted to question what I was doing, he never cleared me. I just hate it for our team. Our McDonald’s Toyota Camry was super solid. Just needed to find a little bit on the short run to get the balance where we needed and it would have been just like Kansas.”

He doubled down on that story telling other media outlets, “There was nowhere clear and just stayed in the gas. I lifted and it was too late at that point. And he just ran us into the fence. Everything broke and we were wadded up.”

Bubba Wallace on what happened in the Kyle Larson incident and his reaction to it. pic.twitter.com/6FZK5k6Nw4

Wallace has now changed his tune. He issued a statement and shared it to his social media apologizing for his on-track actions.

The statement begins, “I want to apologize for my actions on Sunday following the on-track incident with Kyle Larson and the No. 5 car. My behavior does not align with the core values that are shared by 23XI Racing and our partners, who have played a crucial role in my incredible journey to the top of this great sport.”

RELATED: After Winning At Kansas Bubba Wallace Says He’s “Thankful To Shut The Hell Up For A Lot Of People”

NASCAR is reviewing the incident. However, Wallace was not called to the NASCAR hauler following the race as reported by NBC Sports’ Dustin Long.

Long tweeted on Sunday, “NASCAR states that they will review the entire incident between Bubba Wallace and Kyle Larson this week. NASCAR did NOT call Wallace to the hauler after the incident.”

As for when a punishment if any will be announced, FOX Sports’ Bob Pockrass speculates it will happen Tuesday afternoon or early evening.

He tweeted, “Typically NASCAR announces penalties from the weekend late Tuesday afternoon/early Tuesday evening so would expect any penalties on Wallace to be announced later today.”

What do you make of Wallace’s apology? What kind of penalty if any do you think Wallace will receive?

NEXT: Bubba Wallace Inks Multiyear Contract Extension With 23XI Racing Less Than A Week After Saying “I Failed Everybody”