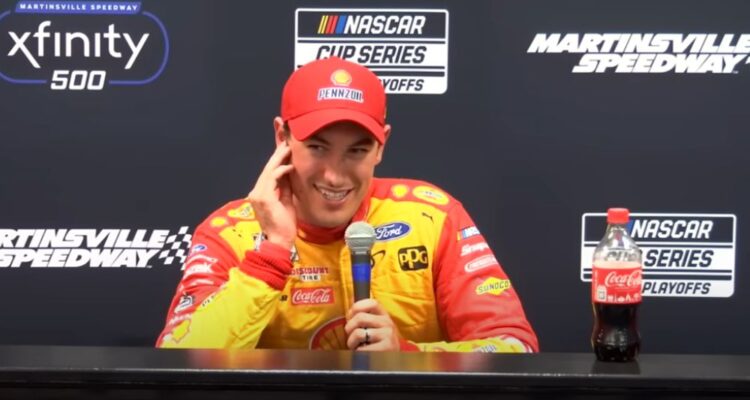 Joey Logano, the driver of the No. 22 Penske Ford Mustang, called for NASCAR to outlaw wall-riding from the sport after Ross Chastain deployed the video game move to ensure a spot in the Championship 4 at Phoenix.

On the last lap of the Xfinity 500 at Martinsville Speedway, Chastain put his car into fifth gear, ran up the track, hit the gas and rode around the wall to cross the line in fifth. He would eventually be moved up a spot after NASCAR disqualified Brad Keselowski for not meeting weight standards.

Take a look at the wild move:

Here’s another look at the move.

This doesn’t even look real 😳

Ross fan, @caleb_matthew21 captured it perfectly…we all had the same reaction!

Logano reacted to the move in a post-race press conference, where he shared his awe at the move.

Logano went on to praise the move, but tempered that with calling for NASCAR to outlaw it.

He continued, “It was awesome, it was cool like I mean it happened for the first time, there’s no rule against it. There needs to be a rule against this one because it’s — I don’t know if you want the whole field riding the wall coming to the checkered flag. I don’t know for one if it’s the safest thing for a driver or the fans when you got a car right up against the wall hauling the mail like that, right?”

“What if that catch fence, the gate wasn’t closed all the way way or what if it bent and it caught his car. That’s a big, big risk that Ross is willing to take. And God bless him and that’s awesome, but I don’t think we need to do that every week,” Logano stated.

RELATED: Denny Hamlin On Bubba Wallace Wrecking Kyle Larson: “It’ll Just Take Some Time For Him To Change That Narrative”

Later in the press conference he elaborated, “Like I said, it doesn’t have to happen every week. We can’t make it a thing. But I mean, hey, the first time it happens that’s pretty awesome. If that don’t make SportsCenter Top 10 plays, I don’t know what does. To get into a race for a championship and doing that and that’s crazy.

I haven’t really talked to Ross. I don’t know how he feels about it, right? I mean you think about getting bounced off the wall like that your head’s bouncing around like crazy. You touch the fence there’s no suspension between the car and the fence. It’s really rough if you start riding the wall like that.

He then reiterated, “Like I said, we need to do something about it. It’s awesome. If we did it every week it wouldn’t be very professional at all, but since it’s the first time, hey, more power to him.”

Logano wasn’t the only to react to Chastain’s move. Kevin Harvick shared his thoughts writing on Twitter, “Like the move or not very few have to guts to do WHATEVER it takes in the moment. Some talk and some actually do it. #EPIC.”

Like the move or not very few have to guts to do WHATEVER it takes in the moment. Some talk and some actually do it. #EPIC https://t.co/wTQN8WpzMG

SiriusXM NASCAR Radio host and lead turn announcer for the Motor Racing Network Dave Moody was baffled by Logano’s call for a rule outlawing the move. He wrote on Twitter, “The fact that a small handful of NASCAR drivers want NASCAR to create yet another new rule outlawing one of the most incredible last-lap moves in the history of the sport — one that had every fan on their feet and cheering — is beyond baffling to me.”

Kyle Petty concurred with Moody simply writing, “I’m with you!”

What do you make of Logano’s comments? Do you think NASCAR should outlaw the wall riding move? Or do you think drivers should adapt to the move?

NEXT: Kyle Larson Calls Ross Chastain’s Last Lap Move At Martinsville “Embarrassing” And “Not A Good Look For Our Sport” Despite Attempting Similar Move At Darlington