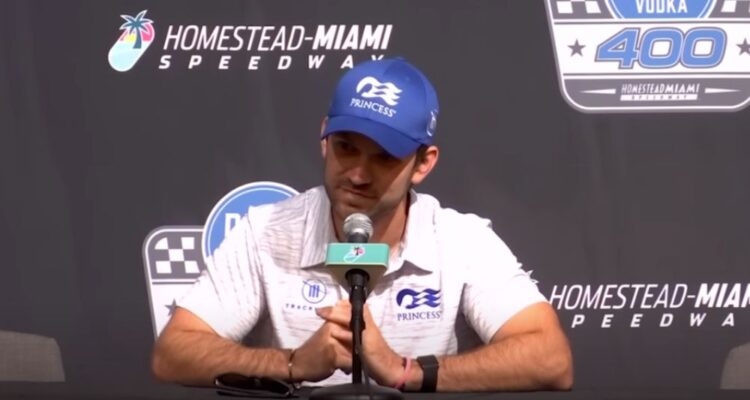 Daniel Suárez, the driver of the No. 99 Trackhouse Chevrolet Camaro, recently weighed in on both Bubba Wallace’s actions at Las Vegas Motor Speedway as well as Cole Custer’s actions at the Roval.

During a press conference heading into the race at Miami-Homestead this past weekend, Suárez was asked by FOX Sports reporter Bob Pockrass for his thoughts on both positions and whether or not the penalties would affect the way he races.

Suárez answered, “Honestly, it hasn’t changed anything in the way I think or the way I do things. Because in my opinion all of those moves were extremely, extremely dumb. Both of them. And both of them I was going to be extremely surprised if they were not penalties.”

“Before even those situations happened, I would never do something like that. I mean not that clear. You have to be smarter. I don’t know what those guys were thinking,” he said.

“But I am glad NASCAR is reacting to this,” he asserted. “Because when is too much? When is too much of helping a teammate? And people know, you know, I’m going to race everyone — I race everyone hard. But, yeah, in the next few weeks I’m gonna race Ross not super hard just because he’s my teammate. I know what is ahead of him. I’m gonna keep pressing him hard. I will never give up a win to help him. But definitely my level of aggression to my teammate right now is going to be a little lower.”

Specifically referencing Cole Custer’s actions, Suárez said, “But I will never break to give up a position. I know the consequences of that. That’s not professional.”

He then turned his attention to Wallace saying, “The same thing wrecking somebody in the way that it happened last week. It’s just — it’s not smart especially with everything that is happening right now.

“Honestly, I’m glad that NASCAR is stepping and they were able to put everyone in their places because it was too much,” he concluded.

NASCAR suspended Bubba Wallace for a single race after he intentionally wrecked Kyle Larson during the South Point 400 at Las Vegas Motor Speedway.

It all started when Larson dived to the inside of both Kevin Harvick and Wallace. Harvick backed out of it and allowed Wallace and Larson to race through the corner. Larson began getting loose and was chasing his car up the track, squeezing Wallace closer to the wall.

Larson dove to the bottom of the track to avoid Wallace. Wallace believing Larson was at fault because he drove into the wall decided to chase Larson down the track and hit him in the right rear quarter panel. Larson went spinning up the track, making contact with Christopher Bell before making contact with the outside wall.

The contact with Larson also wrecked Wallace as he too went spinning up the track and slammed the wall nose first.

Wallace also confronted Bubba Wallace following the wreck. He exited his car walked down the track and attempted to instigate a fight by repeatedly shoving Larson.

He then refused to follow a NASCAR official’s instruction to go to the infield care center, but instead walked across the infield into the pit road where he fist-bumped his teammates. NASCAR noted their one-race suspension was only for his on-track actions and wrecking Larson rather than anything following the wreck.

As for Cole Custer’s actions, NASCAR penalized him for allegedly blocking both Austin Dillon and Erik Jones on the final lap of the race at the Charlotte Motor Speedway Road Course race in order to secure his teammate, Chase Briscoe, a spot in the Round of 8.

Heading down the back stretch and going into the chicane, Custer appeared to slow down and brake early holding up both Dillon and Jones as Briscoe darted by all of them on the inside and on to a 9th place finish. Meanwhile Custer would end up finishing 24th.

NASCAR penalized Custer following the race with a $100,000 fine and a 50-point penalty in both the Driver and Owner standings.

What do you make of Daniel Suárez’s comments on Bubba Wallace and Cole Custer’s actions?