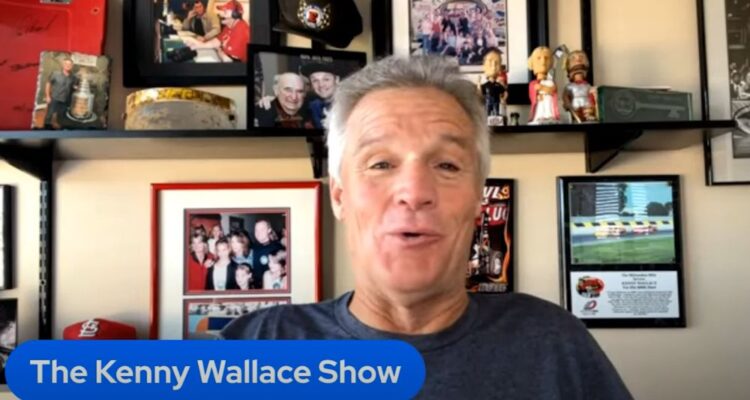 Kenny Wallace continued, “It reminds me of the great Dick Trickle. ‘I didn’t give you much room, but I gave you enough room.'”

“Bubba Wallace on his own decided to run his own car into the wall,” Kenny Wallace declared. “I’m sorry that’s the way it is. You can say whatever you want, but I know what I’m talking about, okay.”

Kenny Wallace then pointed to Bubba’s interview following the wreck where he says he doesn’t lift.

Bubba Wallace told NBC Sports, “Cliff’s smart enough to know how easy these cars break so when you get shoved into the fence, deliberately like he did, trying to force me to lift, steering was gone. Just so happened to be there.”

“Hate it. Hate it for our team. Fast, super fast car. Had no short run speed. As you were seeing, we were kind of falling there. Larson wanted to make a three-wide dive bomb, never cleared me. I don’t lift so I know I’m kind of new to running up front, but I don’t lift. Wasn’t even a spot to lift and he never lifted either and now we’re junk. Just a piss poor move on his execution,” Wallace added.

Addressing these remarks, Kenny Wallace said, “After the race, Bubba does the interview and says, ‘I don’t lift for nobody.’ Hey, you wrecked your stuff. You ran your car into the wall. All Bubba has to do is realize that he’s coming up, Kyle’s coming up. He’s gotta let out of the gas and then go back to racing him.”

“Then he loses his mind, right? Now, if he backs off the gas he goes on racing,” Kenny Wallace continued. “Now, Bubba runs his own self into the wall, okay, because Kyle scares him and Bubba’s got chips on his shoulders.”

Kenny then tells his listeners, “I’m not talking bad about Bubba Wallace, I’m telling you what Bubba’s doing here. Now, after he runs himself into the wall…he gets really pissed, more pissed. Takes out Kyle Larson and wrecks himself too.”

RELATED: NASCAR Drops The Hammer And Penalizes Kevin Harvick And His Team For “Unapproved Modification Of A Single-Source Part”

Moving to Bubba’s actions following the wreck, Kenny Wallace says, “What’s Bubba doing here? He goes over, Kyle mouths something back, and Bubba’s going to fight him. Of course, Kyle been in trouble a little bit as we all know. I’m not broaching that subject. That’s not the subject. Kyle’s been in a little trouble himself. Kyle’s like I’m out buddy.

“And Bubba’s the one pushing him. Bubba’s the one provoking him. ‘Come on, Kyle, do something back so we’re both suspended here.’ … Kyle Larson learned his lesson. Kyle did not take the bait. He was masterful in this moment,” Kenny Wallace noted.

Addressing Bubba Wallace’s excuse that he didn’t have steering, Kenny says, “He had steering. I will give Bubba Wallace an A+ for trying to insult our intelligence during the interview. ‘I don’t lift for nobody. I’m the man. I’m now a front runner.’ And Bubba’s thinking quick. ‘When I hit the wall, hey, I had no steering, okay.’ You had steering.”

Kenny Wallace then asserts, “NASCAR has been suspending drivers that wrecked drivers on purpose forever. Go way back to Sears Point, Sonoma. As Schrader would say, ‘190-s**t.’ It was Davey Allison and Ricky Rudd on the 180 degree corner. They gave the victory to the guy that wrecked Davey or vice versa.”

“Now, if you want to bump somebody and they lose it — you can’t go from one lane and smash into another driver,” Kenny Wallace stated.

He then shared his prediction for what NASCAR’s punishment will be, “NASCAR will suspend Bubba Wallace. They will fine him big maybe not suspending him for wrecking Kyle Larson on purpose. Everybody could see it. He handled this whole deal wrong.”

As Kenny Wallace noted, video footage of Wallace hitting the wall does not show Kyle Larson touching Wallace’s car at all. Instead Wallace appears to not let up as he noted in his interviews and he slammed hard into the wall.