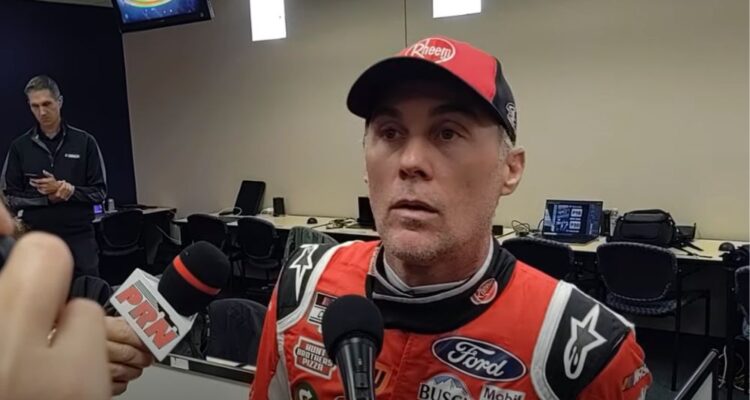 NASCAR announced they penalized Kevin Harvick and his No. 4 Stewart-Haas Racing team for an “unapproved modification of a single-source part.”

NASCAR.com reports the penalty was issued after Harvick’s vehicle was selected as one of two cars along with Martin Truex Jr.’s No. 19 to be taken back to the NASCAR Research & Development Center after the race at Talladega Superspeedway.

Following the inspection of the vehicle, NASCAR determined Harvick and his team had an “unapproved modification for a single-source part.” NASCAR.com notes the infraction fell “under the heading of Sections 14.1 (vehicle assembly) and 14.5 (body).

He wrote on Twitter, “It is my understanding that the part in question in the Harvick penalty is the deck lid.”

Along with the point penalty, Harvick’s crew chief, Rodney Childers, was also suspended for four races and fined $100,000.

Childers reacted to the suspension on Twitter sarcastically writing, “Shocker.”

Harvick has been one of the most outspoken drivers criticizing NASCAR for their single source supplied parts.

Following the Cook Out Southern 500 at the beginning of September where his car caught fire around lap 45 of Stage 3, Harvick told NBC Sports, “I’m sure it’s just the crappy parts on the race car like we’ve seen so many times. We haven’t fixed anything. It’s kind of like the safety stuff, we just let it keep going and keep going. And the car started burning and as it burns, you know, the flames started coming through the dash and I ran a couple of laps and then as the flame got bigger it started burning stuff up.”

Then after Alex Bowman announced he would not be racing at Talladega due to concussion-like symptoms he was suffering from that were the result of a wreck at Texas Motor Speedway, Harvick took to Twitter where he stated, “Completely unacceptable that those in charge have let things get to this point.”

He added, “I remember it like it was yesterday, Denny Hamlin in the presentation of the new car to the drivers pleading that the car was to stiff. Data didn’t agree. TIME TO LISTEN TO THE DRIVERS CRASHING THEM!”

The rear of the vehicle and the deck lid have also been a major point of contention due to the injuries drivers are suffering when the vehicles are involved in rear-end collisions.

Brad Keselowski, the driver and owner of the No. 6 Roush Fenway Keselowski Racing car, explained, “In order to put that gearbox or transaxle in the back of the car NASCAR had to really change the way the car was designed. Effectively they took the rear half of the car and they had to really strengthen it up.”

Later in the segment, Keselowski detailed how they had to strengthen the rear clip even further because of issues with the transaxle breaking, “Backing up, some of our fans at home I’m sure remember earlier in the season at the Clash, the first race of the year, we had a couple cars actually dropped out of the race because the transaxle broke.”

“And the reason why it broke was because the rear clip wasn’t strong enough. So we’ve actually even gone back from the start of the year and made it even stronger to try to make up for this transaxle. I think that’s one of the big causes,” he noted.

What do you make of these penalties to Harvick and his team?

NEXT: Chase Elliott Criticizes NASCAR’s Next Gen Car And The Ongoing Safety Issues: “There’s No Excuse”