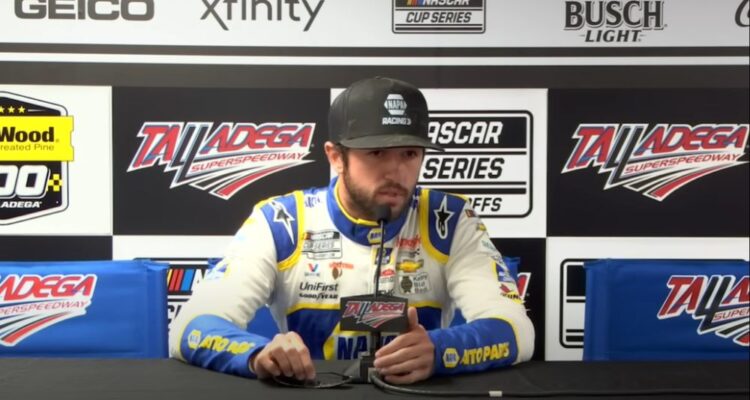 Ahead of his victory at the Talladega Superspeedway on Sunday, Chase Elliott criticized NASCAR’s Next Gen car specifically for the numerous problem that have surfaced regarding its safety and the impact it has had on drivers.

At Texas Motor Speedway, Elliott cut a tire and slammed hard into the wall. His car then erupted into flames.

Both Kurt Busch and Alex Bowman, both who had qualified for the NASCAR Cup Series Playoffs have been knocked out due to rear-collision crashes. Kurt Busch wrecked during qualifying at Pocono back in July and has not raced since then.

Alex Bowman wrecked at Texas and did not race at Talladega. It’s unclear if he will be back in the driver’s seat at the Roval at Charlotte.

Given these clear safety issues with the vehicles, Elliot shared his thoughts on Twitter responding to Trackhouse Racing owner Justin Marks.

Marks tweeted, “This new car is the most radical change in the history of NASCAR – perfecting its performance and safety is going to be a process. We cannot assume perfection right out of the gates. This comes from an owner whose parts expense is an order of magnitude more than budgeted.”

Elliott replied, “With the experience and knowledge gained since 1948 and the technology we have in 2022… we should never take steps backwards in any area with a new design.”

Marks concurred writing, “I don’t necessarily disagree, I think a perfected product right out of the gates is still a bit of a tall order. I think the true test is going to be what we do now.”

Elliot elaborated on his comments during a press conference at Talladega Superspeedway saying, “I don’t feel like we should have ever been in this position to begin with to need to go forward. We should have gone forward with a new opportunity at a new car in my opinion.”

“You have all these years of experience and knowledge and time of racing and crashing these cars and teams working on them and building them,” Elliott continued. “It just blows me away that we can have something new in 2022 that offers all this technology and all this time and experience of so many just super talented people in this sport and we allow it to go backwards especially with safety. It’s just super surprising to me that we allowed that to happen.”

Elliott then said, “But we did and now it’s just about how do we go forward from here making sure we’re making the right choices to improve what we have and keep things like what happened to Alex this week from happening and what happened to Kurt. Those types of incidents didn’t result in injuries in the past handful of years from me just watching. Obviously, I’m not a doctor, but I watched a lot of cars back into the wall and those guys be fine.”

“I just hate to see that. And no one’s immune to it. It could be me next week or it could be my peers or my fellow competitors and nobody wants to see that no matter how much you like or dislike a guy in my opinion,” he noted.

“I just hate to see us go backwards,” Elliott stated. “And I’m afraid, I’m afraid that we have in some of those areas. But look, it’s about how we come together and how do we go forward from here and I think there’s a lot of really smart individuals to try to help make that happen. And I’m confident that we will. But it’s crucial that we do, in my opinion.”

“Having guys out during the Playoffs right now or any time for that matter shouldn’t be happening and I think it’s taking away from our product on Sunday. That should be the focus. Who wins and who loses and how the race was and how a guy did driving his car and how his team executed a good or bad race,” Elliott concluded the question.

Later in the interview, Elliott heavily criticized NASCAR for not already correcting the problems the car is facing after previous crash tests, “Heck, we had plenty of enough time to test this car and crash it and do all the things that we need to do to ensure that some of these things aren’t happening that are happening now.”

“We had a ton of time to do that. And this car was delayed an entire calendar year on top of that. You got to think we got an extra year of time to work on it and we’re still in this position,” he said.

“There’s no excuse for going backward,” Elliott bluntly declared. “We have too many smart people, too much technology, too many years of crashing and racing at all these same race tracks to have some of the things that are going on that they are, in my opinion.”

He proclaimed, “Test next week or no test next week, we should not be in the position that we are in. When you come out with a new product you should take step forwards not stay the same or go backwards especially in the safety category in my opinion.”

“And look, don’t take me the wrong way. We’re very fortunate and I’m very grateful to do what I do. This is my job and that’s crazy right. I’m not ungrateful for what I have and the opportunities that have been presented to me. You just hate to see something take steps the wrong way,” he asserted.

This upcoming race at the Roval at Charlotte Motor Speedway is the last race in the Round of 12. Chase Elliot is locked into the next round of the Playoffs following his win at Talladega. Austin Cindric, William Byron, Christopher Bell, and Alex Bowman are currently sitting outside looking in

Cindric is tied with Chase Briscoe, who currently sits in 8th with 3069 points. Byron is 11 points both of them. Bell sits 33 points behind and Alex Bowman is 54 points behind because of his injury.

What do you make of Elliot’s comments about the safety of the Next Gen cars?

NEXT: Ross Chastain Says Denny Hamlin Isn’t The Mouthpiece For The Garage After Hamlin’s Criticism Of NASCAR, Call For New Leadership