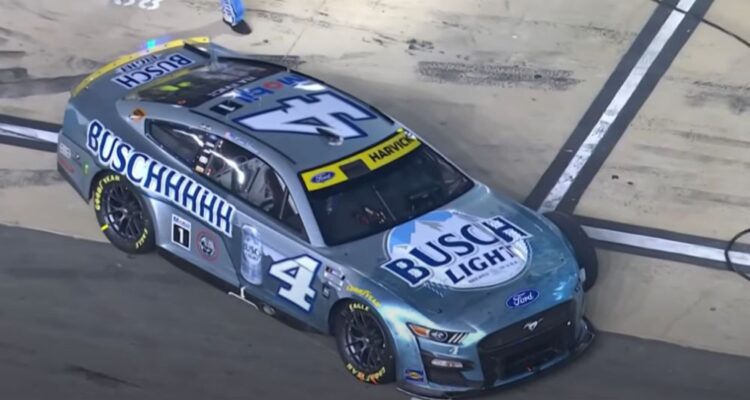 NASCAR Senior Vice President Scott Miller recently responded to criticism from multiple drivers regarding the quality of the parts they are supplying teams after multiple teams were knocked out of the race at Bristol Motor Speedway due to parts failures.

Bristol Motor Speedway put the Next Gen car to the test and it catastrophically failed for a number of drivers including Martin Truex Jr., Ty Gibbs, Ty Dillon, and Alex Bowman.

Others saw the misery of their fellow drivers and made it clear they were not happy about the unreliable parts they are being required to use by NASCAR.

RELATED: NASCAR Responds To Kevin Harvick Calling Them Out For “S****y Parts”

Martin Truex Jr. was the first to exit the race due to a steering issue and he made it clear he was not happy about the parts issue referencing Kevin Harvick’s comments made at the Cook Out Southern 500 at Darlington Raceway.

During that race Harvick was eliminated when a fire erupted in the cockpit after his rocker panel caught fire. Harvick put the blame on NASCAR saying, “’m sure it’s just the crappy parts on the race car like we’ve seen so many times. We haven’t fixed anything. It’s kind of like the safety stuff, we just let it keep going and keep going. And the car started burning and as it burns, you know, the flames started coming through the dash and I ran a couple of laps and then as the flame got bigger it started burning stuff up.”

Truex added his thoughts at Bristol when he was asked if he was done, “Yeah. It blew the seal out and pushed all the fluid out on the right front tire. It’s unbelievable. What’d Harvick say? Crappy parts?”

Driver of the No. 11 Joe Gibbs Racing Toyota Camry TRD and the owner of the 23XI Racing team Denny Hamlin also took issue with the parts following the race.

He wrote on Twitter, “We need NextGen 2.0. Just gotta figure out who’s gonna pay for it.”

He also told NBC Sports’ Dave Burns, “(The Next Gen) was tough. I would like to see the racing improve overall. Some lap time variation a little bit. We’re just running around there and it’s like we’re running faster in the corners than we are on the straightaways. Just extremely hard to pass. We had some steering issues, and it looks like our Toyota teammates also had steering issues.”

RELATED: After A Second DNF Due To Engine Failure, Kyle Busch Says It’s A “Toyota Issue”

Miller responded to these criticisms during an appearance on SiriusXM NASCAR Radio saying, “Bristol is definitely a unique load case. And some things cropped up with the steering that weren’t expected. But with the newness of this car and the newness of everything it’s not acceptable to have problems, but it’s probably part of the learning process for us all.”

He continued, “And all the teams and OEMs were involved in the RFP process when we chose the parts. So everybody’s got a stake in this, and it’s not just NASCAR choosing quote-unquote, crappy parts.”

💭 “It’s not acceptable to have problems, but it’s probably part of the learning process for us all.”

🛠️ @NASCAR SVP Scott Miller addressed the parts issues on the Next Gen car from @BMSupdates this weekend on #TMDNASCAR. pic.twitter.com/92uNqenQ0a

Miller would then address a question about the state of the car saying, “Well, with every part of this car actually being a new part and a new design, I think historically in racing, and in any walk of life, when you do something completely new with a departure there’s a learning curve. So we’re in that learning curve, and working really hard to make sure that everything works. And I think for the most part it has.”

He went on to address the steering issues at Bristol, “We did have some steering issues at Bristol. That is, again, a part that was chosen through the RFP process, and it is team-serviceable. So that’s where we are right now. Are we looking to improve on when we have problems? We absolutely 100% are every single day. What happened at Bristol was not acceptable. We will diligently work to come up with a solution to where that doesn’t happen again.”

What do you make of Miller’s response?

NEXT: 23XI Racing President Steve Lauletta Responds To Conspiracy Theory That Joe Gibbs Racing Was Trying To Get Kyle Busch Eliminated From The NASCAR Playoffs