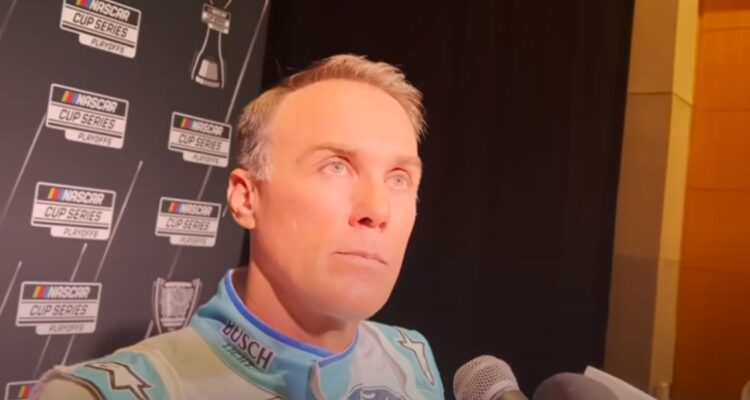 NASCAR Cup Series driver Kevin Harvick expressed his shock and took NASCAR to task after the company’s SVP of Competition Scott Miller claimed the organization had “no eyes on” William Byron spinning out Denny Hamlin under caution.

When asked about Byron hitting Hamlin, Miller answered, “I’ll have to be honest with you, Bob, when we were in the tower we were paying more attention to the actual cause of the caution up there and dispatching our equipment.”

“The William Byron Denny Hamlin thing we had no eyes on. We saw Denny go through the grass and by the time we got a replay that showed the incident well enough to do anything to it, we’d gone back to green,” he said.

Miller concluded, “But I’m not sure that that issue is completely resolved as of yet. So we’ll be looking at that when we get back to work.”

Harvick reacted to Miller’s comments as reported by FOX Sports’ NASCAR reporter Bob Pockrass on Twitter writing, “Wait what??? How in the world is this possible?”

He then shared video of Byron’s in-car camera from the official NASCAR Twitter account showing him clearly spinning out and wrecking Hamlin under caution.

Harvick wrote, “So these are the cameras in every car… crazy we cant get those up in the tower.”

So these are the cameras in every car… crazy we cant get those up in the tower. https://t.co/Q6gp0OhjVM

He then broadly criticized for NASCAR for not penalizing Byron during the race suggesting that NASCAR follow Formula 1’s model.

Harvick explained, “All of these situations should be handled during the race. Just like F1 “under investigation” works at any point of the race, you issue a penalty and move on.”

“That way when you ‘don’t see it’ you can still handle during the event,” he elaborated.

Harvick would then assert that Byron’s in-car camera was NASCAR-owned and that NBC Sports and FOX Sports are unable to use.

He then again tore into NASCAR for their failure to penalize Byron writing, “This camera is actually NASCAR owned camera that TV apparently can’t use but sure seems like it should be hard to miss.”

“Even if you miss it has to be addressed during the race. Just bring your social media rep to race control you’ll know everything that’s happening eventually,” he asserted.

Harvick didn’t just put NASCAR to the torch for their lack of punishment against William Byron. He also noted they need to fix pit road opening issues that reared its head after a very hard and dangerous hit suffered by Cody Ware at Texas.

Ware slammed into the outside wall at Texas coming out of turn four and then his car came down the track into the pit road where it barely missed a hard opening in the pit wall that could have done severe damage to the driver.

This isn’t the first time an accident like this has occurred. Mark Martin made contact with the pit wall opening back at Michigan while he was the leader of the race. The pit wall barely missed the driver side door, hitting just behind Martin’s seat.

Harvick tweeted, “Openings should be filled ASAP. Figure out access another way on one end or the other of pit wall. Just glad it wasn’t worse than it was so lets not wait.”

He also wants improvements to the Next Gen car when it comes to crash impact safety and the amount of damage drivers’ bodies are taking when they are involved in an accident.

Harvick blew a tire while leading the race and smacked the wall with the rear of his car pretty hard. The car then came back up the track and the front of the vehicle made contact with the wall. It then drove around the wall for a couple of feet.

When asked how he was feeling after the wreck, Harvick replied, “Currently doing red light therapy with an extremely sore back and neck.”

“All the reasons that the car has issues that need to be addressed. Sore body, car keeps going after extreme contact,” he added.

Harvick previously addressed the media about the hits the Next Gen cars are suffering saying, “Every hit that I’ve pretty much taken in the car hurts. We hear it week after week after week. Seems slow, the response in my opinion. That’s just my opinion.

He continued, “From my previous experiences I’ve had some things that I’ve presented that we’re three years into having no response to. So from a driver’s standpoint the things that I think that the drivers would consider most important may not rank as high on that priority list when those people — everybody’s not out there banging into stuff themselves.”

When told about Joey Logano’s comments and that the problem is money, Harvick bluntly replied, “Well, that tells you where we rank. Money is more important than the safety of the car. That’s the perception that seems to be coming with it.”

Harvick also said the car is not better than the previous car, “It’s not better from a crashing standpoint. The hits are violent and at Sonoma I hit the back of the 2 car so hard that it locked my Hans out and I just kept going. It was just over the hill. They checked up and I hit him and it locked my Hans. And every hit is violent and some of the smallest hits hurt like they shouldn’t hurt.”

The driver of the No. 4 went on, “Everybody knows that the car is too stiff and I think when you look at the crash data it just doesn’t represent what the drivers are feeling in the car. They’ll say, ‘Well, it was only a 15G hit.’ Well, I’m telling you some of those 15G hits feel like 50 compared to what they have been in old cars.”

He then pointed to the wreck at Daytona, “And like at Daytona, in that particular wreck, those hits were all hard and I think especially the one s where the car gets loose and goes to the right. When you watch that video of all those cars slide and then just go immediately to the right, I can’t even explain to you how violent that is and then to have half the field or more piling into you—”

“It’s all too slow to me,” Harvick reiterated. “We talk about guys getting gassed out and things on a random; it’s just random. It’s like I said earlier I’ve been in a scenario where I had just tons of blood work and urine work and all the things presented us as to what was inside my body with the specifics of what was in my bloodstream after the race and I’m still three and a half years into hearing from somebody.”

When questioned on whether the wrecks are at different angles and at higher speeds, Harvick said, “I disagree. … They don’t feel the same, Bob. They are just blunt, violent wrecks. Every time you hit something and they do not feel like they did in the old car. It’s like we’ve taken the soft walls down. Every time we hit a car it feels like hitting a concrete wall. Every time we hit a soft wall it feels like hitting a concrete wall. They are violent. There’s no way around it.”

What do you make of Harvick putting NASCAR’s feet to the coals on a number of issues?

NEXT: Kyle Busch Answers Why A Deal Wasn’t Made With Joe Gibbs Racing After Making Announcement To Join Richard Childress Racing