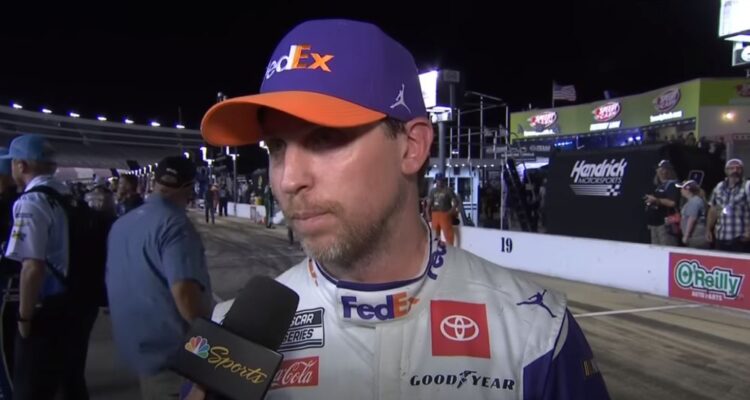 Denny Hamlin made it clear he was not happy with NASCAR and Goodyear following the race at Texas Motor Speedway that saw a number of drivers have tire issues resulting in numerous wrecks.

Hamlin’s teammate Martin Truex Jr., veteran Kevin Harvick, and Playoff contender Chase Elliott all had tire issues while they were leading the race.

Elliott blew a tire and then slammed hard into the wall. His right front tire would then catch fire and burn it up as he drove the car into the infield. NASCAR’s safety crew would eventually get to the car and put the fire out.

Harvick also blew a right rear tire and went catapulting into the wall while he was leading the race.

Truex Jr. had the same issue with a right rear tire going down while leading the race.

Commenting on Truex’s crash, NBC Sports analyst Dale Earnhardt Jr. said, “I don’t even know what else to do. How do we get to the end of this race? That’s the question.”

Truex Jr. who had a steering issue at Bristol stemming from NASCAR’s mandated parts was not happy in his interview after exiting the infield care center.

He told NBC Sports, “Blew a tire. Simple as that. I guess same as everybody else has been having.”

When specifically asked about the tires he said, “I mean I wasn’t any faster up front than I had been running. I think we had throughout the day, our tires all looked really good. We had one right rear that came off they said, ‘One more lap, it was probably going to blow out.’ And they have no idea why. It wasn’t a lap count thing or anything it was just the one right rear was just destroyed.”

“Like I said our tires looked good all day. I think it’s just a freak deal. Either you draw the unlucky straw or you don’t,” he concluded.

Truex Jr. elaborated in another interview saying, “We had no problems all day and then all of a sudden we took one tire off and James said it wouldn’t have made one more lap. He’s like, ‘I have no idea why. We’ve run more laps on tires than this one, but this thing I’ve never seen anything look like this my whole life.'”

“Then we go racing and put more tires on, everything’s fine. Then all of a sudden we’re leading and poof it blows out. So I just don’t even know what to say between crappy parts and tires exploding and all the bulls*** we’re dealing with. It’s a joke,” he exclaimed.

When asked what he’s supposed to do, he replied, “There’s a lot of people that make a lot of money to do this and get this stuff right. That’s all I’m going to say about it.”

Kevin Harvick’s crew chief Rodney Childers offered his thoughts on the tires saying, “My view still comes down to the rules and the box we are in. And the track at TX compounds it all.”

“The problem wasn’t necessarily the tires, yes they could be better. But, the reason there are tire issues is the shock limiter rule,” he explained. “The teams wouldn’t be running the tires lower if you could get the car lower in the back and the diffuser to it’s optimal downforce point. If you could run the car lower with the suspension you would actually run more air in the tires to keep the travel more consistent.”

He added, “Another option that would help is make the rear diffuser where it makes the most downforce with 1/2″ higher than it is. (Kinda impossible)”

“Right now you can’t really get the diffuser down to the optimal spot for maximum downforce, because you are locked by the limiters,” he relayed. “Your only way to get it lower and go faster is to let air out of the tires. If yo in 1&2 u get the differ .100″ lower by squishing the tires more, it’s free speed. Like you added more spoiler to your car.”

He then noted, “On top of that, the TX track config makes it worse. Less speed, less banking, less load on one end of the track compared to the other. So to keep the car low enough and be fast in 1&2 where you can pass, you have to be bumping limiters ‘some’ in 3&4. Hitting solid rods puts all the load thru the tires.”

He then offered his solutions, “1. Make the back of the where it makes max downforce at a higher height. (Long term goal) 2. Get rid of the limiter rule. It has caused nothing but issues the entire year. It would make every team want to run more air in the tires. And some of the reason the racing isn’t as good at some track. Driver aren’t going to race door to door when they are scared to death thru 3&4. 3. Make the tires more durable. It can’t be like a knife edge.”

Hamlin expressed his frustration on Twitter writing, “If your thinking that maybe NASCAR will look into someone else for tires, keep dreaming. [Goodyear] pays them a fat check so they are allowed to gouge the teams each week.”

Joey Logano also shared his thoughts on SiriusXM NASCAR Radio, “A lot of it is due to the lack of practice that we have. In the past, we would have seen some of these issues in practice before the race with excessive tire wear or issues when you run a 35-lap run or a 30-lap run at a place like Texas in the final run of happy hour. And then you can change something before the race starts.”

“Right now, with no practice you can’t run that long. If you want to come in and make a change you are running two 8-lap sessions and then you have to have time in there to make the change. … If there is an issue it may not show itself and if it does how are you going to fix it? You can’t change your front end settings besides toe. And even in the back if you have too much camber in the rear or whatever it might be,” he explained.

💭 “A lot of it is due to the lack of practice we have.”@joeylogano shared his take on why the @GoodyearRacing tire issues were more prevalent at Texas and his concern about them moving forward.

🗣 “I don’t want the championship to be determined by a set of tires.” #NASCAR pic.twitter.com/SmvvKAUeQ1

“But there was a lot of teams that reported no problems to us post-race and they did admit to being a little bit on the conservative side air pressure and being closer to the suggested minimums that Goodyear recommended,” he concluded.

What do you make of Hamlin’s pointed comments? What about Joey Logano and Rodney Childers’ assements?

NEXT: NASCAR Punishes Both Ty Gibbs And William Byron For Their Actions At Texas Motor Speedway