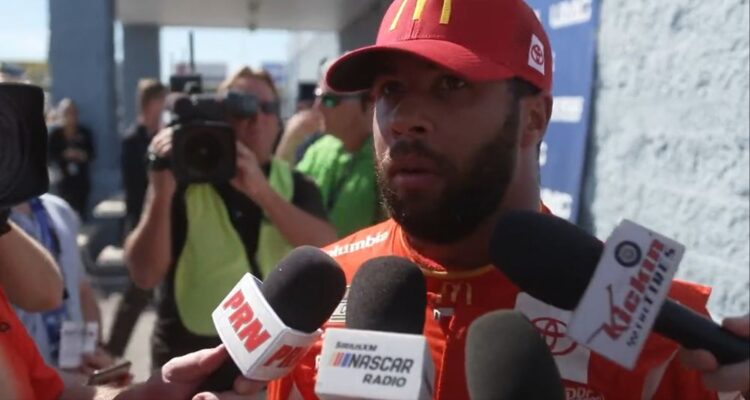 NASCAR announced they suspended Bubba Wallace one race for his actions at Las Vegas Motor Speedway where he deliberately retaliated against Kyle Larson on the track.

During the South Point 400, Larson had a strong run going into turn 3 and he dove to the inside of both Kevin Harvick and Bubba Wallace. Harvick got out of the gas and let Larson and Wallace race for the position.

As they continued into turn four, Larson got loose and began to chase his car up the track inching ever close to Wallace. However, he never made contact with Wallace. Coming off the turn, Wallace slammed into the outside wall hard, bounced off it and down into Larson.

Larson dove to the inside of the track to avoid Wallace. Wallace believing Larson had wronged him by chasing his car up the track chased him down the track and ran into his right rear quarter panel sending both cars spinning up the track. Larson would make contact with Christopher Bell before making contact with the wall. Wallace would smash nose first into the outside wall.

NASCAR.com reports Wallace violated “Sections 4.3A and 4.4 C & E of the NASCAR Member Code of Conduct laid out in the NASCAR Rule Book. Rule 4.4.C lists “intentionally wrecking or spinning another vehicle, whether or not that vehicle is removed from Competition as a result’ as one of five member actions that could result in a penalty.”

FOX Sports’ Bob Pockrass shared the rule noting that a violation of the rule can result in a loss of 25-50 driver and Team Owner Points and a $50,000 to $100,000 fine as well as race suspensions or even a termination.

He stated, “Our actions are really specific to what took place on the racetrack. And when we look at how that incident occurred, in our minds, a really dangerous act. We thought that was intentional and put other competitors at risk. And as we look at the sport and where we are today and where we want to draw that line going forward, we thought that definitely crossed the line and that’s what we focused on in terms of making this call.”

O’Donnell further explained the process behind making the call, “Well, we’ve got a lot of data available to us and we looked at that data and kind of reviewed the incident from a bunch of different angles and in our view, our determination through conversations that’s where we netted out.”

“We believed it was a heat of the moment action that took place and I think you saw through Bubba’s statement that if he had to do that all over again I think maybe it would be a different circumstance. I think we understand it’s a dangerous sport and drivers are out there. There’s a lot of emotion. There’s a lot on the line. Everybody is racing their guts out, which is awesome for the sport. It’s never been better in terms of that.

O’Donnell then noted, “But in this case we felt it just crossed the line and we really had to react because it’s an action we don’t want to see going forward. And I know fans and people like to compare the what ifs or what happened in the past.”

He further detailed, “For us this was a reaction based on what took place Sunday and what we don’t want to see going forward in races that take place from the competitors. And want to draw that line and be as clear as we can for our competitors of where we stand.”

O’Donnell explained, “It does in terms of it impacted other drivers as well. So when we look at this incident you’re not only endangering one, but there’s a lot of cars out there at speed. It’s a high rate of speed. It’s on an intermediate track. All those things factor in. So, it has nothing to do — this could be race two at an intermediate and it’s the same call.”

“When I say it does, it does in the fact that other cars that are out there competing when you take that action and you affected multiple cars. All that is taken into consideration,” he clarified.

As noted by NASCAR.com, O’Donnell also detailed, “When we look at drivers historically, it’s been very rare if ever that we suspend drivers, so we don’t take that action lightly.”

He continued, “So we view our penalties from what has to happen at the race track. It’s a driver-driven sport. Obviously, everybody’s very important to what takes place in the sport. …

O’Donnell also noted, “But the driver oftentimes is the focus. And what happens on track is a big focus. So in this case, that’s an action we’ve rarely moved forward with when it comes to a driver. There’s comparisons to what we’ve done in the past, but as we’ve always said, we need to ratchet things up where we see that there’s a line that’s been crossed.”

Wallace previously issued an apology to social media. He stated, “I want to apologize for my actions on Sunday following the on-track incident with Kyle Larson and the No. 5 car. My behavior does not align with the core values that are shared by 23XI Racing and our partners, who have played a crucial role in my incredible journey to the top of this great sport.”

Following the suspension, 23XI Racing issued their own statement noting that John Hunter Nemecheck would drive the No. 45 Toyota Camry at Homestead-Miami Speedway this upcoming weekend.

Their statement reads, “23XI is aligned with NASCAR on the one-race suspension issued to Bubba and we understand the need for the series to take a clear stand on the incidents that took place at Las Vegas Motor Speedway. ”

“As a result of the penalty, John Hunter Nemechek will drive the No. 45 Toyota this weekend at Homstead-Miami Speedway,” the statement concluded.

What do you make of NASCAR suspending Bubba Wallace one race?

NEXT: Chase Elliott Criticizes NASCAR’s Next Gen Car And The Ongoing Safety Issues: “There’s No Excuse”