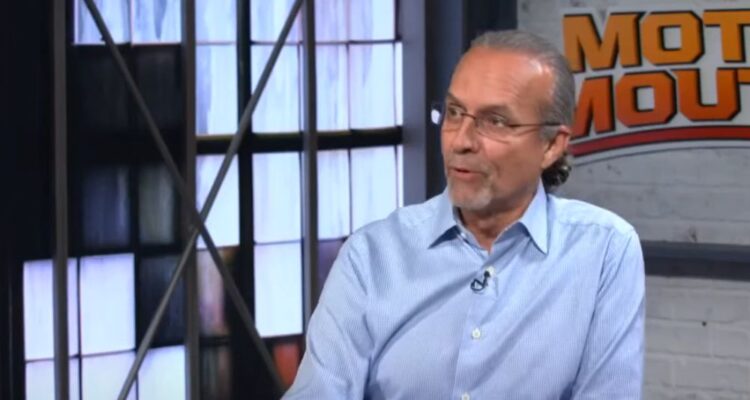 Kyle Petty Doesn’t Buy Bubba Wallace’s Apology, Calls For A Stronger Suspension: “He Should Have Been Suspended For The Rest Of The Year”

Former NASCAR Cup Series driver and current analyst for NBC Sports Kyle Petty made it clear he disagrees with NASCAR’s punishment of Bubba Wallace after he retaliated against Kyle Larson during the South Point 400 at the Las Vegas Speedway.

NASCAR suspended Wallace for the upcoming race at the Homestead-Miami Speedway. He only received the suspension and was not fined or docked any points.

Wallace intentionally retaliated against Kyle Larson after he dove to the bottom of both him and Kevin Harvick in Turn 3. Harvick backed out of the three-wide racing, leaving just Wallace and Larson to race through the turn.

Larson’s car began to get loose and he chased it up the track, squeezing Wallace into the outside lane. However, he never makes contact with Wallace and after coming out of Turn 4, Wallace slams into the outside wall hard. After hitting the wall he bounces down into Larson’s car. Larson dives to the bottom of the track. Wallace chases him down there and then purposefully hits him in the right rear quarter panel sending both cars spinning up the track.

Kyle Petty reacted to NASCAR’s suspension revealing the punishment was not hard enough and that he believes Wallace should have been suspended for the rest of the season.

Petty began, “Marty, my friend, there’s so many layers to this onion. We could deep fry it and sell it at Outback. It’s a Bloomin’ Onion. So I disagree a little and this is what I say. He should have been suspended for the rest of the year. Rest of the year.”

Petty went on to explain why he believes Wallace should have been suspended for the rest of the year, “He drives for Denny Hamlin, who has been vocal about safety. The only reason he’s in the 45 car is his teammate’s career was all but ended because of an accident in this car that the drivers have vocalized need to be safer.”

“First, you intentionally wreck somebody. That’s a suspension,” he asserted. “He’s walking across the racetrack and cars are going by him on both sides. That’s not safe. That should be another suspension. Physically confronts a driver. Shoves him. That’s a physical confrontation. If I do that on the sidewalk I’m in handcuffs somewhere, okay?”

“So he physically confronts this driver, shoves an official, doesn’t get in an ambulance, walks back to the pits, and then stands and bold faced tells a fib — I’m being nice — to my man here, Marty Snider, who did a great job in your interview, I will give you that,” he said.

“So the lesson should be the rest of the year, just the rest of the year. That’s just me, okay? My man Matt Kenseth, who didn’t speak to me for almost a year after his accident with Joey Logano, got two races. So you can turn a guy, right side, driver side into the wall at 180 mph and you get one,” Petty compared.

He then pointed to the suspension of Kyle Busch’s crew chief and pit crew that were given four week suspensions at the same time Wallace was only given one, “Oh yeah, and by the way we won’t see on the same day the juxtaposition of the 18 crew chief and pit crew who get four week suspension for a tire rolling down pit road. But let me go back, it’s okay to spin a guy and knock him into a wall and you only get one.”

“The optics of that for NASCAR and the optics are not good. They’re just not good. He should have at least gotten the rest of the year. I’m sorry,” he declared.

“He can say the steering broke, but he never lifted off the accelerator at the same time he drove back down the racetrack whichever way you want to go,” Petty continued. “This was an unprofessional move. What we saw out of Kyle Larson was a champion and a professional reaction to the situation. The way he backed away from Bubba. The way your interview with him, another good interview, Marty. The way you interviewed him and the things he had to say.”

Petty then detailed, “But what bothered me, I have driven race cars, to get hooked in the right rear it is so freaking intentional. You have no recourse, no chance to recover. So at that point in time Kyle Larson’s along for the ride. The way the car spun, the way it hit the 20 car, it goes driver’s side in. We’ve seen, again, you’ve seen Kurt Busch and we’ve seen Alex Bowman. They backed in and they’re not here right now. They’re not driving because of concussions.”

Still later in the segment, Petty disputed Wallace’s apology that he issued via social media.

On Twitter he wrote, “I want to apologize for my actions on Sunday following the on-track incident with Kyle Larson and the No. 5 car. My behavior does not align with the core values that are shared by 23XI Racing and our partners, who have played a crucial role in my incredible journey to the top of this great sport.”

When Snider points out that Wallace issued this apology, Petty replied, “Uh uh uh uh. His PR people sent out an apology, okay? And they should win a Pulitzer prize for it because it is so full of you know what. That there’s no way. This is unbelievable. It just is.”

“I hate to say that, but in an incident like this there needs to be more than just a written not here with that origami logo on the bottom of it. He needs to say something,” Petty asserted.

“Listen, I don’t believe it sent a message to Bubba Wallace. He has yet to convince me that he got the message. Have you seen anything that says he’s got the message. Other than the tweets that were sent out on his Twitter account.”

The show then played video of Wallace fist bumping his pit crew after he wrecked Larson and repeatedly shoved him in an attempt to provoke a fight, Petty described it as an insult.

He then criticized NASCAR as well, “And listen, I’m going to say this. I’m out on this limb, I might as well cut it off. NASCAR deserves some blame on this too. 45 seconds from the time he got out of the car that he walked across that racetrack, across that grass. Did you see any NASCAR officials trying to stop him? You see any NASCAR officials trying to intervene? And so this wouldn’t happen on our network, on NBC, so the confrontation wouldn’t take place. No, I didn’t see anything.”

“You see that in an NFL game? You see that in a NHL game. No, the referee is there. The official is there on the scene. When somebody charges the mound the umps are headed that direction. Did you see any? I didn’t see any,” Petty stated.

What do you make of Petty’s call for Wallace to be suspended longer and his criticism of Wallace and NASCAR?

NEXT: Brad Keselowski Reacts To NASCAR’s Suspension Of Bubba Wallace: “Tough But Important Statement To The Garage”