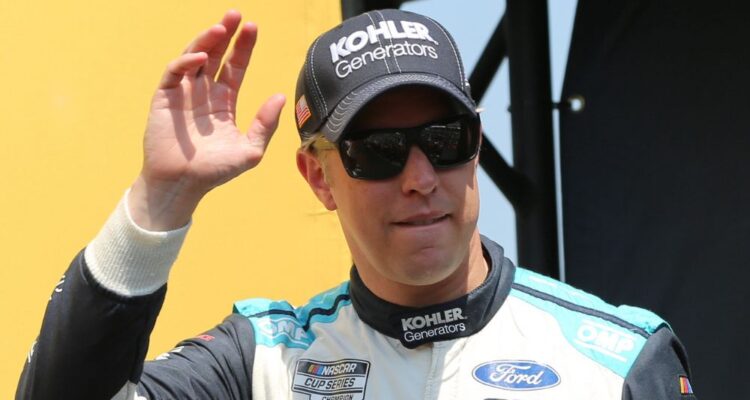 Brad Keselowski Reacts To NASCAR’s Suspension Of Bubba Wallace: “Tough But Important Statement To The Garage”

Brad Keselowski reacted to NASCAR suspending Bubba Wallace for one race after he intentionally wrecked Kyle Larson during the South Point 400 at the Las Vegas Motor Speedway.

NASCAR announced Wallace was suspended one race for violating “Sections 4.3A and 4.4 C & E of the NASCAR Member Code of Conduct laid out in the NASCAR Rule Book. Rule 4.4.C lists ‘intentionally wrecking or spinning another vehicle, whether or not that vehicle is removed from Competition as a result’ as one of five member actions that could result in a penalty.”

He did not receive a points penalty or fine, just the one race suspension.

The suspension came after Wallace intentionally wrecked Larson during Lap 94 of the race. Larson had a huge run going into Turn 3 and dove to the bottom of the track underneath both Kevin Harvick and Bubba Wallace. Harvick appeared to back out of it allowing Larson and Wallace to race through the corner.

Larson’s car started to get loose and he chased it up the track squeezing Wallace up the track as well. However, Larson never made contact with Wallace. Coming out of Turn 4, Wallace slams hard into the wall and then bounces down into Larson.

Larson dives to the bottom of the track to avoid Wallace. Wallace then chased after him and purposefully ran into Larson’s right rear quarter panel sending him spinning up the track and into Christopher Bell as well as the outside wall. Wallace would also lose control of his car and slam hard into the outside wall, nose first.

Reacting to Wallace’s actions before NASCAR handed out its punishment, Joey Logano told SiriusXM NASCAR Radio, “You know Bubba got squeezed. I didn’t see contact, but he got squeezed and they both kind of got into that pocket of air with the wind blowing, and boom everyone kind of slides up and hits the wall.”

“The retaliation is not okay in the way it happened,” Logano asserted. “If he spun to the infield maybe it’s a little better, maybe. But right rear hooking someone in the dog leg is not okay. I don’t know if everyone realizes how bad that could have been. That could have been the end of Kyle Larson’s career. That to me was what was on the line. Or his life.

💭 “That could’ve been the end of Kyle Larson’s career. That, to me, was what was on the line. Or his life.”@joeylogano shared his strong thoughts on the incident at Las Vegas involving Bubba Wallace and Larson 🎧⬇️ #NASCAR

🗣 “There’s no room for that. You can’t do that.” pic.twitter.com/yGQXoJpc3E

Logano continued, “That is the worst spot to get right rear hooked into a corner. The dog leg is pretty sharp. And when you come in and hit the angle that he hit, in a way he’s lucky he hit the 20 to soften it a little bit, he might have flush hit that thing on the side and been game over.

I don’t like using cars for a weapon. For that matter, just get out and fight him. That’s fine. If that’s what you really want to do and that’s how you want to handle it, that’s fine. You can make someone’s life hell if you want to, racing them. But do I think just straight up blasting them into the wall is okay? No, because the consequences are way bigger than just a race and you will live with regret the rest of your life. That’s the bottom line.

“If you seriously injured somebody in retaliation for something that wasn’t huge, I don’t think you can live with yourself after that. And I don’t want to take that risk,” Logano concluded.

The driver and owner of the No. 6 RFK Racing Ford Mustang wrote on Twitter, “Can’t go back in time to reverse Sunday so No decision was going to make everyone happy.”

He then added, “This is a pivotal moment for our sport given recent injuries. For what it’s worth, I feel NASCAR is making a tough but important statement to the garage that this isn’t acceptable.”

Can’t go back in time to reverse Sunday so No decision was going to make everyone happy.

This is a pivotal moment for our sport given recent injuries. For what it’s worth, I feel @NASCAR is making a tough but important statement to the garage that this isn’t acceptable. https://t.co/1LDDtDtJyg

Keselowski previously called for greater penalties earlier this year. In August he told NASCAR.com, “The reality is that the garage is going through a reset with respect to kind of cutting out the games, and that’s a good thing for us as a sport.”

“I personally think the sport needs more penalties, and that NASCAR needs to be handing them out like candy right now to get control of the garage,” he asserted. “Because, you know, we’ve been playing a lot of games for a lot of years, and the games have to stop.”

“The games cost a lot of money. … And so looking at that, the easiest way for NASCAR to stop those expenses is to stop the games,” he added.

Before being suspended Wallace did issue an apology via social media. He wrote, “I want to apologize for my actions on Sunday following the on-track incident with Kyle Larson and the No. 5 car. My behavior does not align with the core values that are shared by 23XI Racing and our partners, who have played a crucial role in my incredible journey to the top of this great sport.”