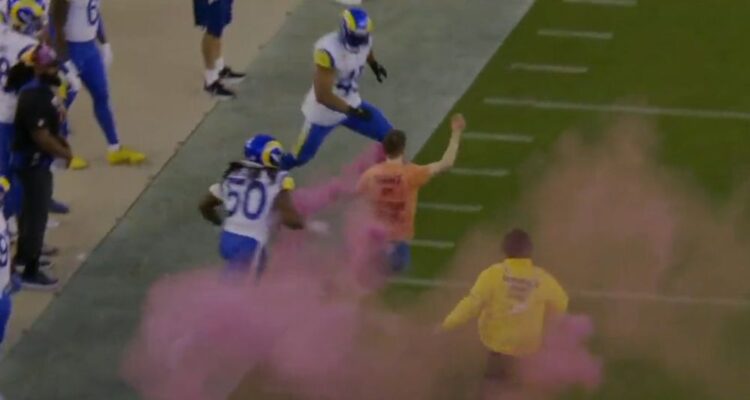 Los Angeles Rams defensive end Takkarist McKinley and linebacker Bobby Wagner obliterated a protestor who ran onto the field in the middle of their Monday Night Football matchup against the San Francisco 49ers.

With about 41 seconds to go in the second quarter animal activists Alex and Allison representing the group Direct Action Everywhere took to the field carrying pink flares.

Alex was able to flee the field’s security dashing across the field and making his way over to the Rams’ bench. However, when he got to the bench, McKinley began pursuing him and led him right into the oncoming tackle of Bobby Wagner.

Wagner lowered the shoulder and leveled the protestor sending him flying onto the ground.

OMG BOBBY WAGNER JUST TRUCKED THE FAN THAT RAN ON THE FIELD pic.twitter.com/uwoEzkrFxc

SportsCenter provided a better look with Peyton and Eli Manning breaking down the hit. Both Mannings cheered on Wagner for taking the protestor down.

Peyton then says, “That’s what we are talking about! Wagner, a veteran. Get him down. Now get out and let these guys take over. Bobby Wagner. Veteran play.”

When Eli points to the smoke, Peyton says, “He’s got a T-shirt on. He’s promoting something.”

Peyton and Eli broke down Bobby Wagner stopping a fan on the field.

Here’s a good shot of the protestor getting destroyed by Wagner on one end and McKinley on the other.

Following the game, Direct Action Everywhere shared a photo of both the activists noting they had been released from police custody.

The tweet reads, “Alex and Allison, the 2 activists who disrupted tonight’s NFL game, have been released from police custody. Alex, who was tackled by Bobby Wagner, has a burn on his arm. Otherwise, they’re a bit beaten up but in good spirits.”

Following the game Wagner recounted why he decided to take action, “I just saw someone running on the field. It looked like he wasn’t supposed to be on the field. So I saw security was having a little problem so I helped them out.”

When asked if he heard from the coaching staff about hitting the fan, Wagner said, “That’s not making a play. That’s just keeping it safe. We don’t know what that fan got or what they doing. You see it all the time and we don’t know what they caring in their pockets. Whatever that little smoke stuff is, but it could be dangerous.”

“So I saw one of the guys on the other side. It looked like he got hurt and security looked like it was struggling. I was frustrated so I took it out on the fan,” he added.

San Francisco 49ers coach Kyle Shanahan also commented on Wagner and McKinley’s destruction of the protestor, “I saw Bobby Wagner taking somebody out. I thought that was kind of cool to see.”

The Rams got dominated by the 49ers falling 24-9. Rams quarterback Matthew Stafford was 32 for 48 for 254 yards. He didn’t score a single touchdown and threw one pick. He also lost a fumble. 49ers quarterback Jimmy Garoppolo went 16 for 27 and 239 yards and one touchdown.

What do you make of Wagner and McKinley’s destruction of this protestor?