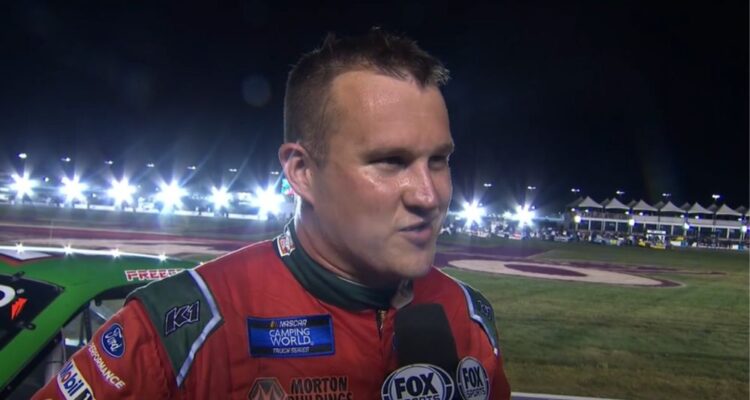 Preece had previously been a reserve driver for SHR throughout the 2022 season with the team detailing he “spent 2022 performing simulator work that has benefitted the entire team and its Cup Series driver lineup of Kevin Harvick, Aric Almirola, Chase Briscoe and Cole Custer.”

RELATED: Kyle Busch Gets Emotional Following His Last Race With Joe Gibbs Racing: “Wish It Wasn’t What It Was Or What It Is”

On top of all this he also managed to start in five NASCAR Whelen Modified Tour races where he had 3 Top 10s and an average finish of 14th. Preece previously won the Modified Tour Championship back in 2013.

“Ryan Preece has been a real asset to our race team this year as we’ve developed the NextGen car. The time and effort he’s put into our program, combined with his real-world racing experience, earned him this opportunity,” said Tony Stewart, co-owner of SHR with Haas Automation founder Gene Haas.

Stewart also had high praise for Preece’s time in the Modified Tour, “I’ve run some Modified Tour races and it’s a tough series with a lot of talent. Ryan’s Mod Tour championship speaks to his talent, and I think he proved that when he pushed all his chips into the middle of the table and bet on himself by getting those Xfinity Series races with Gibbs. When he finally got the right opportunity, he delivered in a big way.”

“Now, Ryan’s got the right opportunity in Cup. We’re proud to have him and look forward to seeing what he can do in our racecars,” Stewart stated.

Preece’s bet was mortgaging his home in order to get two races with Joe Gibbs Racing in 2017. He made the best of that opportunity finishing second in his debut at New Hampshire Speedway. He then went on to win at Iowa Speedway. In fact, in 2017 of the four races he started, he won one and finished in the Top 5 in all of them.

“This is the opportunity I’ve been working for,” Preece said. “Nothing was guaranteed at the start of this year, but I felt like if I put in the time, whether it was in a racecar or in a simulator, that SHR was the place for me. It’s a company built by racers, for racers, and it’s exactly where I want to be.”

He added, “I know this season just finished and most people are looking to take a break, but I can’t wait to get going.”

Preece makes his debut in the No. 41 Ford Mustang at the Busch Light Clash at the Coliseum on February 5, 2023 at the Los Angeles Memorial Coliseum.

With Preece winning the job of the No. 41 Ford Mustang in the NASCAR Cup Series, Cole Custer is out of the car. However, he will be staying with SHR and will be returning to the Xfinity Series where he will be a teammate with Riley Herbst.

“Cole Custer has been a part of SHR since 2017 and we’re glad to have him stay with us,” Stewart said. “Cole’s experience will be invaluable to Riley Herbst as he continues his development in the Xfinity Series.”

What do you make of Ryan Preece getting a full time NASCAR Cup Series ride with Stewart-Haas Racing?

NEXT: Joe Gibbs Racing Announces Ty Gibbs Will Replace Kyle Busch In The NASCAR Cup Series, Will Race The No. 54 Car