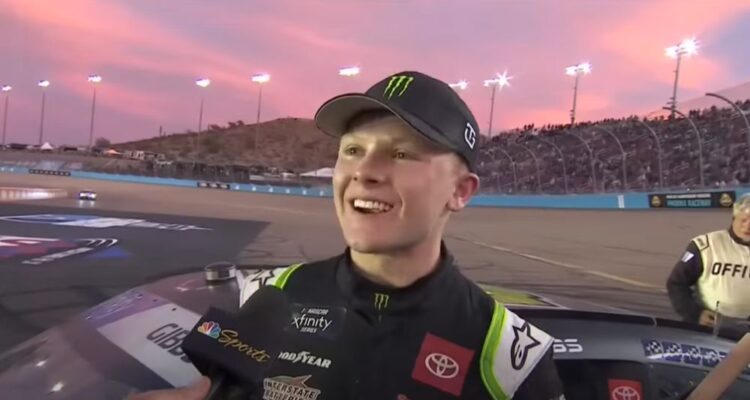 Joe Gibbs Racing Announces Ty Gibbs Will Replace Kyle Busch In The NASCAR Cup Series, Will Race The No. 54 Car

Joe Gibbs Racing announced Ty Gibbs will replace Kyle Busch in the NASCAR Cup Series for the 2023 season. However, he will not be driving the No. 18 that Kyle Busch drove, he will drive the No. 54, the car number he drove in the Xfinity Series.

Joe Gibbs Racing made the announcement in a series of tweets. The first one reads, “NEWS: Ty Gibbs will compete full time for Joe Gibbs Racing in the 2023 NASCAR Cup Series behind the wheel of the No. 54 Toyota Camry TRD.”

The team concluded the announcement revealing Gibbs’ crew chief from the Xfinity Series will follow him to the NASCAR Cup Series.

They wrote, “Chris Gayle, who served as crew chief during his NASCAR Xfinity Championship season, will move with Gibbs to serve as crew chief in the Cup Series.”

“JGR intends to utilize the No. 18 in the NASCAR Cup Series in future years,” they concluded.

The announcement comes a little over a week after Gibbs won the NASCAR Xfinity Series Championship at Phoenix Raceway on November 5th.

He beat out Noah Gragson, Justin Allgaier, and Josh Berry in a race he dominated from start to finish. Gibbs started on the pole, led a total of 125 out of 200 laps as well as securing wins in both Stage 1 and Stage 2.

In the closing laps he would duel Noah Gragson for the win, but was eventually able to hold him off and claim the Championship.

The Championship win came a week after he won at Martinsville where he intentionally wrecked his teammate Brandon Jones during NASCAR’s Overtime. Gibbs waited until the white flag was thrown to make his move, ensuring that the next flag thrown would be the end of the race.

Soon after taking the white flag, he intentionally rammed Brandon Jones sending him spinning up the track and into the outside wall, ending his chances of winning and securing a spot in the Championship 4 at Phoenix.

Following his victory at Phoenix, he was not cheered, but jeered. Nevertheless he said, “First off, I just want to say thank you to my team, everyone of these guys, my pit crew. What an awesome job. They put us here. Great job to my team.”

He then addressed his actions at Martinsville, “What I did last week was unacceptable and I apologize once again. But it was unacceptable because we could have had two shots to win this deal and it was stupid from an organization standpoint. So all my fault.”

He then declared, “I can sit here and tell you I’m sorry as much as I can, but it’s not gonna fix it. Gotta fix my actions.”

After thanking his sponsors he addressed his fans, “Thank you to the fans even though I know I don’t have that many of them. Hopefully, I earned some respect back and we’ll move on. Thank you, guys!”

The day after winning the championship, Gibbs lost his father Coy Gibbs, the co-owner of Joe Gibbs Racing.

The team announced his passing via Twitter writing, “It is with great sorrow that Joe Gibbs Racing confirms that Coy Gibbs (co-owner) went to be with the Lord in his sleep last night. The family appreciates all the thoughts and prayers and asks for privacy at this time.”

On top of Gibbs’ championships in the Xfinity and ARCA Series, he does have Cup experience. He filled in for Kurt Busch after the veteran suffered a concussion during a qualifying lap at Pocono Raceway.

He started 15 races this past season and secured only one Top 10. That came at Michigan International Speedway where he finished 10th. His average finish was 22.9.

What do you make of Joe Gibbs Racing promoting Ty Gibbs to the NASCAR Cup Series?

NEXT: Ty Gibbs Backtracks On Comparing Himself To Jesus Christ: “It Came Out The Wrong Way”