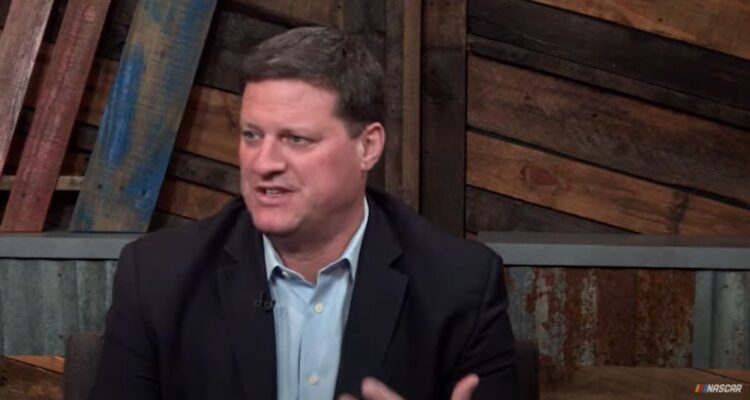 NASCAR Chief Operating Officer Steve O’Donnell recently explained why he and NASCAR decided to not punish Ty Gibbs for intentionally wrecking Brandon Jones on the last lap at Martinsville Speedway during the Dead on Tools 250.

Gibbs purposely wrecked Jones on the last lap following a green, white, checkered overtime restart. Shortly after taking the white flag, Gibbs accelerated into the back of Jones just as he was diving into Turn 1. The contact sent Jones spinning up the track and destroying his car against the outside wall.

NASCAR waved the caution flag and due to the fact it was on the last lap they also ended the race and awarded the win to Gibbs.

RELATED: Ty Gibbs Bizarrely Compares Himself To Jesus Christ After Wrecking His Teammate To Take The Checkered Flag At Martinsville

Following the race, Gibbs claims he didn’t mean to wreck Jones, but only meant to move him out of the way.

When asked if it was a fair move, Gibbs said, “I definitely didn’t want to wreck him, but I wanted to get him out of the groove. I felt like we lost earlier at the spring race just in the same way.”

O’Donnell appeared on SiriusXM NASCAR Radio to address why NASCAR did not take any action against Ty Gibbs despite suspending Bubba Wallace for intentionally wrecking Kyle Larson at Las Vegas Motor Speedway just three weeks ago.

O’Donnell detailed, “When you are at 165 miles per hour hooking someone into the wall for what was to us payback, that’s very different than what we saw in terms of making a move racing for a win.”

“That’s not to say I agree with how that was executed by any means, but we’re a contact sport, we’ve said that, there’s a very fine line in terms of how far do you go in officiating,” he added.

RELATED: Noah Gragson Encourages Brandon Jones To Beat Up Ty Gibbs After He Wrecked Him At Martinsville

O’Donnell continued, “You know, Pete, I heard you talk about short tracks. Maybe you didn’t talk to the folks at Bowman Gray. A lot of tracks have things where you can’t touch the leader. I don’t think the fans would want us to go that route.”

He then reiterated, “Certainly didn’t like what we saw Saturday in terms of how that win came about, but at the end of the day I think the drivers, it’s in their hands.”

“What is intent? It’s very hard to judge. That was close for sure, but obviously we made the call to let that one go,” he declared.

O’Donnell was then asked about payback and how they might deal with it during the championship race at Phoenix.

He answered, “Well, we meet with all the competitors anytime there’s an incident. We did that with Bubba and Larson. We’ll do the same thing prior to Phoenix. We’ll look at that and whatever happens we’ll have to make a call.”

“The drivers will understand where we’re at in terms of what we expect on the racetrack and who’s racing for a championship,” he continued. “And that’s across the board. We do that every single time. No incident’s the same. And it’s hard to judge.”

“You saw what Denny Hamlin did, I think, the last 10 laps of the Martinsville race and I think everybody would say that was fantastic, right? He had to go, gave a little bump, kept going, someone brake checked him and that car gets out of line and oh my gosh we’re talking about something different,” he tried to deflect.

“So it’s really hard to judge the intent,” he repeated. “We have a lot of tools where we can do that with the SMT data and everything. I think we all saw what we saw Saturday. Especially I think it’s heightened because of teammates and the situation and I think you got to take that into consideration as well.”

O’Donnell is speaking out of both sides of his mouth. This is abundantly clear when he admits that he does not think what Ty did was right when he says, “Certainly didn’t like what we saw Saturday in terms of how that win came about.” But also claimed he didn’t want to interfere as an official.

Even worse is that he claims it’s in the driver’s hands. It was certainly in Ty Gibbs’ hands as he wrecked Brandon Jones. However, it wasn’t in Jones’ hands. He was a sitting duck for Gibbs who easily picked him off and moved on seemingly knowing NASCAR would do nothing about it.

Maybe what’s even more hypocritical is that NASCAR actually has a rule on the book that they could have easily enforced to punish Ty Gibbs. It’s the same rule they used to punish William Byron and amended after their punishment of Byron was reversed to just fine him a larger instead of hitting him with a fine and a point deduction.

The rule before it was amended read, “Member actions that could result in a 25-50 driver and Team Owner Points and/or $50,000-$100,000 fine and/or one Race suspension, indefinite suspension, or terminate: intentionally wrecking another vehicle, whether or not that vehicle is removed from Competition as a result.”

By not punishing Ty Gibbs for this behavior, NASCAR is telling everyone that they can and should wreck people in order to win races. If that’s the case, and the drivers do indeed get that message it’s not hard to imagine NASCAR devolving into a demolition derby rather than the sport of racing.

As O’Donnell said, we all saw what happened and what happened was Ty Gibbs intentionally wrecking Brandon Jones after the white flag was thrown in order to win the race. Their decision to sit on their laurels and not punish Gibbs is unjust.

What do you make of O’Donnell’s explanation?

NEXT: Kenny Wallace Skewers Ty Gibbs After He Purposely Wrecked Brandon Jones To Win At Martinsville: “He Thinks He’s God”