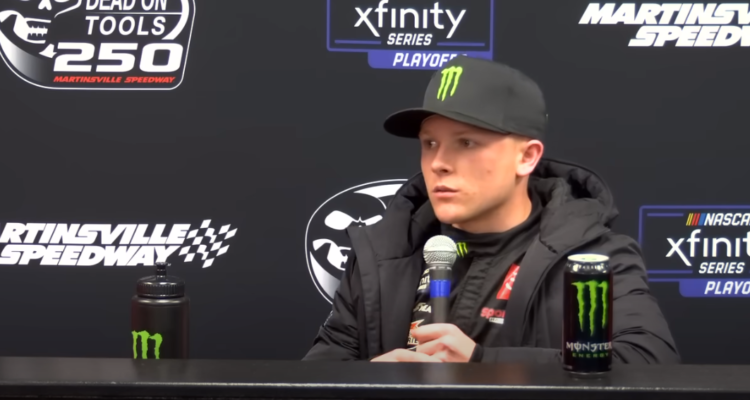 Ty Gibbs bizarrely compared himself to Jesus Christ after he wrecked his teammate, Brandon Jones, on the last lap to take the checkered flag at Martinsville.

On the last lap of the race, Gibbs intentionally ran into the rear of Jones going into Turn 1. The impact sent Jones spinning up the track and into the outside wall. The wreck drew the caution, but due to NASCAR’s rules the caution ended the race and the win was awarded to Gibbs.

After wrecking his teammate, Gibbs went on to celebrate the victory in front of a raucous crowd at Martinsville that reigned boos down on him for the unsportsmanlike move.

The fans don’t like his move to win. #NASCAR pic.twitter.com/fYSQRuJwEF

A number of fans even began chanting, “Thank you, grandpa.” A reference to Gibbs’ grandfather, Joe Gibbs, providing Ty Gibbs the car to compete in the NASCAR Xfinity Series.

Fans chanting “Thank you, grandpa” to Ty Gibbs as he celebrates in victory lane. pic.twitter.com/bPGgePBGs8

Speaking with SiriusXM NASCAR Radio after the race, Gibbs was asked about getting booed. He responded, “I always go back to the same verse. Jesus was hated first and among all the people.  So, you know, that’s a part of it, I feel like. Silencing out the crowd. And I feel like that’s what you have to do as a professional athlete.”

“I feel like some of the best people are going to get booed and that’s part of life. You can’t let other people’s opinions and thoughts drive your actions and make you feel bad or anything. It’s just part of life,” he added.

💭 “Jesus was hated first and among all the people. That’s a part of it […] silencing out the crowd.”

When asked if the boos eat him up, Gibbs replied, “No, not at all. And if I did let it eat me up then it would be weak on my part.”

“There’s definitely things to learn. Like I definitely — there are situations that you have to learn from. You might be able to let it eat you up a little bit just so you learn from it,” he added.

When Claire Lang noted, “Maybe I’d do it differently next time,” Gibbs replied, “I mean that or same stuff like what happened at Texas or even earlier this year when I got in a scuffle. There’s just some stuff that you might let it get to you just so you can learn from it. But besides that for wins are wins, and you can’t let it get to you.”

First off, what Gibbs did was unjust. He intentionally wrecked Jones to claim the win. Second, he’s now trying to justify the righteous anger from the crowd as them somehow persecuting him. No, he deserved to get booed. Ty Gibbs is not the victim. He’s the one who wrecked Brandon Jones on purpose.

Third, Gibbs shows that he’s acting in opposite of the verse when he makes it clear his focus is on the worldly or the wins. He makes it clear at the end of the clip it’s all about the win for him. Nothing else matters.

Gibbs should look to another Bible verse instead. He should look to 1 Peter that reads, “So humble yourselves under the mighty hand of God, that he may exalt you in due time.”

Another passage Gibbs should look to is in Philippians. It reads, “Do nothing out of selfishness or out of vainglory; rather, humbly regard others as more important than yourselves each looking out not for his own interests, but [also] everyone for those of others.”

The passage continues, “Have among yourselves the same attitude that is also yours in Christ Jesus, Who, though he was in the form of God did not regard equality with God something to be grasped. Rather, he emptied himself, taking the form of a slave, coming in human likeness; and found human in appearance, he humbled himself, becoming obedient to death, even death on a cross.”

What do you make of Gibbs comparing himself to Jesus Christ after wrecking his teammate?

NEXT: Noah Gragson Encourages Brandon Jones To Beat Up Ty Gibbs After He Wrecked Him At Martinsville