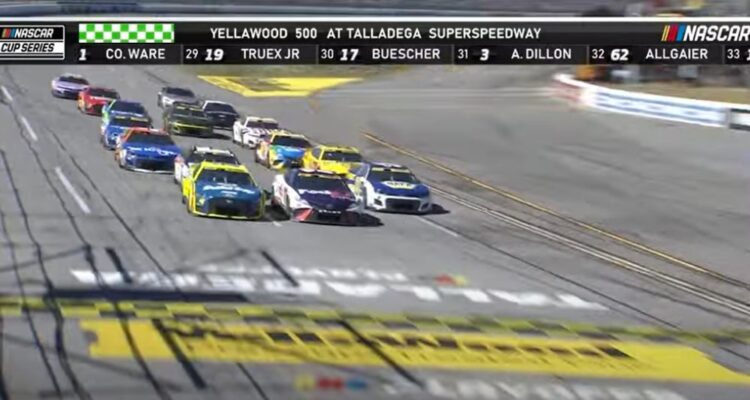 Ryan Blaney, Denny Hamlin, and Chase Elliott race to the end of Stage 1 in the Yellawood 500 at Talladega Superspeedway via NASCAR YouTube

A new rumor claims that NASCAR might remove the stage break cautions during their upcoming road courses races in the 2023 season.

This rumor comes from The Athletic’s Jeff Gluck on The Teardown podcast’s 2022 Season Finale: Listener Mailbag.

A little over 51 minutes into the podcast, listener Jeff C. asks, “When is NASCAR going to make changes to the stage system? Stage breaks suck especially at road courses. Why can’t we just race through the end of the stage and pay the points and keep going like they did back in the day with halfway money.”

Gluck responds, “I think there is good news on the horizon for Jeff C. here because I think that NASCAR — they’ve hinted at this already to some of us — it seems like they are seriously considering a change for next year that would allow them to keep the race green at road courses, still pay the stage points, and mark them.”

He continued, “But I think there is definitely a possibility. They are definitely looking at this. For sure, at this point.”

RELATED: Jeff Burton Explains Why He Believes Joey Logano Is “The Most Valuable Race Car Driver In The Sport”

“To where they would go, ‘Okay, like this has kind of messed up the strategy on road courses.’ Because everybody just does the same thing now, right. You either have to short pit the stage and you know like, ‘Do I want stage points? Do I want to stay out or do I want to put myself in position better for the end of race to try to win it?’ At most of the road courses, anyways, it’s too straight forward.

“And there’s a lot of road courses now,” he said. “Why not keep them green and see if the strategies mix them up. Maybe that causes some road courses to be a little bit more boring or something if the field gets strung out, but that’s no different than back in the day.”

Gluck then reiterated, “I think they are looking at it, and I think that would be a great change, personally.”

What do you make of this rumor? Would you want NASCAR to remove stage break cautions during road courses? What do you think of stage break racing in general?

NEXT: NASCAR Reveals The Current Top 10 Most Popular Drivers As Fan Voting Continues