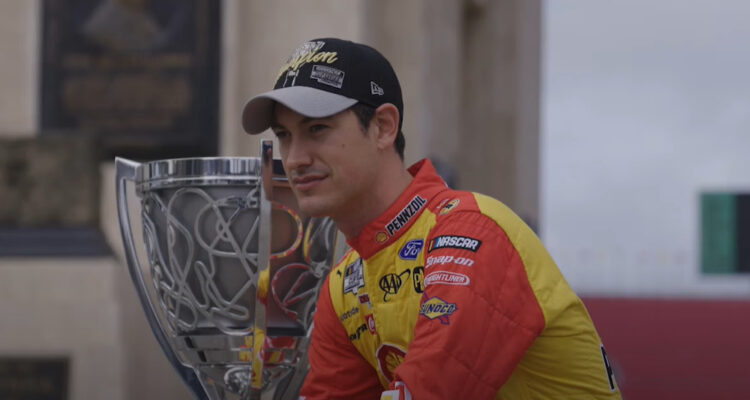 NASCAR on NBC analyst and former NASCAR Cup Series driver Jeff Burton recently explained why he believes the most recent NASCAR Cup Series Champion, Joey Logano, is “the most valuable race car driver in the sport.

The Penske Racing driver started off his season the way he ended it. He won the non-points race Busch Light Clash at the Los Angeles Coliseum. He went on to win three other races outside of Phoenix at Darlington, World Wide Technology Raceway, and Las Vegas Motor Speedway.

Burton explained why he believes Logano is the most valuable on the Mark, Mamba and The Mayor show.

He stated, “Steve Letarte and I talk a lot about drivers and we spend a lot of time having conversations and he and I, we both agree that Joey Logano is the most valuable race car driver in the sport.”

“He’s a split personality, which is very difficult to do. It’s very difficult to be the nice guy off the track, understand all the things you are supposed to do, embrace them, and go do your sponsor commitments, go try to make the sport better than it was when you got here, do it with excitement, do it with enthusiasm, put the helmet on and be the a** that you have to be to win races,” he asserted.

“It’s very hard to do both. There’s a lot that can do one or the other. It’s very few that can do both at the level Joey Logano can do it. And there’s nothing not to like,” he declared.

“And I just think that even the people that have gotten mad at Joey, I think some of it has been blown completely out of proportion,” he continued. “I love the way he races. And I have so much respect for what he does on the track and off the track. If he was a free agent he would be the single highest paid driver in the sport period.”

Burton then compared Logano to Kyle Larson, “And I know Kyle Larson, I think Kyle Larson might be the best driver in the world, but you put Joey Logano and Kyle Larson, you take those guys and put them right at the top at how young they are and what they can do.”

“I just love — Joey’s the complete package,” he concluded.

What do you make of Burton’s assessment do you agree?

NEXT: WATCH: Doug Barnes Jr. Gets Driver Side Door Torn Off While Leading Fall Brawl 2022 At Hickory Motor Speedway