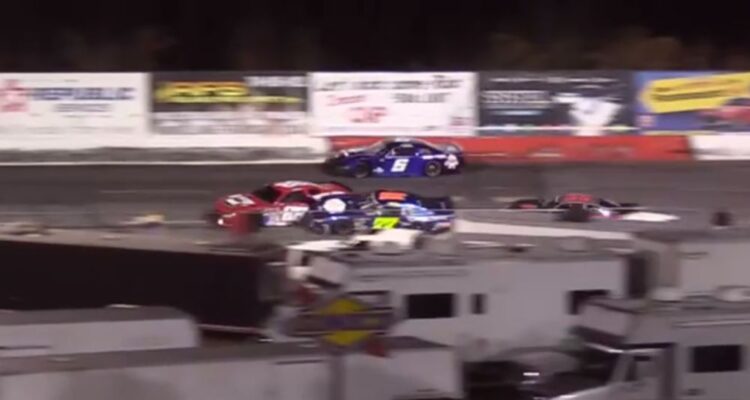 Doug Barnes Jr., the driver of the No. 88 Barnes Paving Late Model Stock Car, saw his driver side door get completely torn off while leading the Fall Brawl 2022 at Hickory Motor Speedway.

Following a restart on lap 174, Barnes Jr. took the lead by putting a block on Connor Hall, who was challenging him from the outside lane. However, it opened him up to attack from Charlie Watson on the inside.

Barnes was able to fend off the challenge as Hall maneuvered back down to the inside of the track and drove it underneath Watson. Hall would clear Hall by Lap 177 and began to quickly close the distance to Barnes.

Hall would get to the bumper of Barnes on Lap 178. He not only got to the bumper of Barnes, but he drove through Barnes’ car coming off Turn 2. The contact shredded Barnes’ left rear quarter panel as well as his driver side door. Despite the contact that crippled both Barnes and Hall’s cars, the green flag stayed out and Charlie Watson assumed the lead. Barnes and Hall would both take their cars to the pits.

Connor Hall drives through Doug Barnes Jr. in the closing laps of the Fall Brawl 2022 at Hickory. pic.twitter.com/DgNVrTKa0j

As the race stayed green, Watson would eventually get chased down by Coleman Pressley, the spotter for NASCAR Cup Series Champion Joey Logano.

Pressley dove to the inside of Watson going into Turn 1 on Lap 194. However, Watson would not go away quietly. He used the ole chrome horn to try and maneuver Pressley up and out of the groove in order to retake the lead. However, Pressley was able to hold him off.

However, on the last lap, a caution would come out after the sixth place driver, Dylon Wilson, spun out in Turns 3 and 4. That forced a green, white, checkered race to the finish.

Pressley was able to hold off Watson and the rest of the field as he pulled away coming out of Turn 4 as Watson faced a challenge from Jaiden Reyna.

Pressley celebrated the win with his family as well as Joey Logano who traded places with him and provided spotting duties throughout the race.

He posted victory lane pictures to Twitter writing, “So this was a great way to return back to the drivers seat! Most special thing about this was my wife and kids being there and having a picture with them as a winner! Thankful for all my friends and family that made this possible.”

So this was a great way to return back to the drivers seat! Most special thing about this was my wife and kids being there and having a picture with them as a winner! Thankful for all my friends and family that made this possible. #fallbrawl pic.twitter.com/MhPtSEitE4

Logano was ecstatic after the win.

He told Racing America’s Matt Weaver, “That was awesome. Coleman and I have been best friends for a long, long time and he spots me. So roles reversed today and I spotted Coleman.

Logano then revealed, “He hasn’t driven a race car in 10 years and he used to be really good here at Hickory. And to see him start 16th and just kind of chill out, save his tires, and methodically pass a couple here and there and then run down the 6, whoever that was, I don’t even know,  and then pass them clean. And then dealt with the pressure afterwards and a green, white, checker, that’s pretty awesome.”

A very ecstatic Joey Logano on winning with his spotter Coleman Pressley in his return to Late Model racing but with him spotting.

Emotions were a little bit different for Doug Barnes Jr., who posted to Twitter, “Wrecked for the win with 20 to go. I will win the Fall Brawl one of these days. Off to Florence next week.”

As Barnes notes the next big Late Model Stock Car race in the southeast will be at Florence Motor Speedway for the South Carolina 400 on November 19th.

What do you make of the contact between Barnes and Hall? What about the race between Watson and Pressley as well as the green, white, checker finish?

NEXT: Joey Logano Reacts To Ross Chastain’s Wall-Ride Move, Calls For NASCAR To Outlaw It