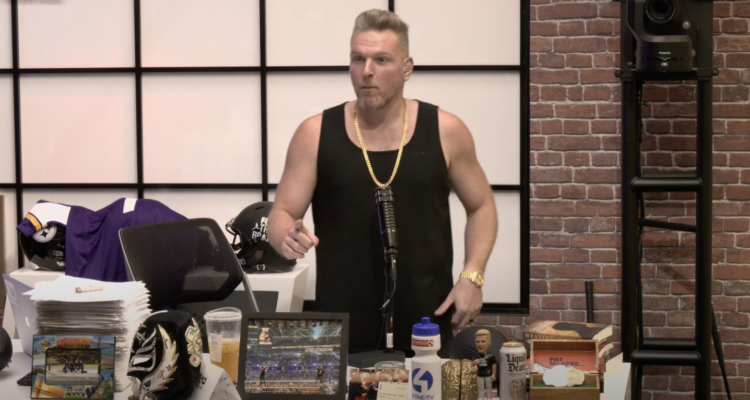 Pat McAfee Slams NFL For Restricting His Show’s Use Of Team Logos: “It’s Been Great Doing Business With You”

Sports commentator Pat McAfee announced on his program that the NFL has ordered a restriction on the use of the logos of their various teams used in the show, and that going forward he cannot use any, even when discussing recent games, news, and other commentary.

“The Professional American Football League will finish its eighth week of its riveting prime-time schedule as the Cincinnati football club travels to Cleveland to take on Cleveland’s football club,” said a sarcastic McAfee on Monday’s edition of the Pat McAfee Show.

“And a lot of people might be asking, ‘Pat, on this particular Halloween, why are you talking the way that you’re talking about the league that you’ve talked about for the last three years?’ Well, the reason I’m doing so is because even though we currently have a rights deal with the NFL that costs millions and millions of dollars, we’ve been informed this morning that we are no longer allowed to use any of their logos on any of our graphics.”

The former NFL punter stated that he has paid more than $4 million to the NFL in order to have the rights to use their numerous logos and highlights of games.

McAfee found a workaround though in a comedic way. For Monday’s game between the Cincinnati Bengals and the Cleveland Browns, he replaced their logos with hand-drawn sketches instead.

“It’s been great doing business with you,” McAfee continued. “I’m happy we have covered your league in the way that we have for the last few years… I don’t think we’ve really touched on many subjects we could’ve dabbled into. And I think we’ll do that this offseason, for sure. Things I know a lot about, that my friends know a lot about, like insurance and CTE [chronic traumatic encephalopathy] and concussions and everything like that.

“I think we can find some people to chat about, to learn more about what the NFL should be held accountable for and what they shouldn’t be held accountable for because I thought the entire deal with the NFL [sarcastic cough], the Professional American Football League, I’m sorry, that I wanted to get involved with was making the game celebrated.”

What are your thoughts how the situation regarding the barring of the use of logos on McAfee’s show? Let us know in the comments below.

NEXT: Kyrie Irving Shares Alex Jones Video Calling Out Totalitarian Governments Coming To Power “By Releasing Diseases And Viruses And Plagues Upon Us”