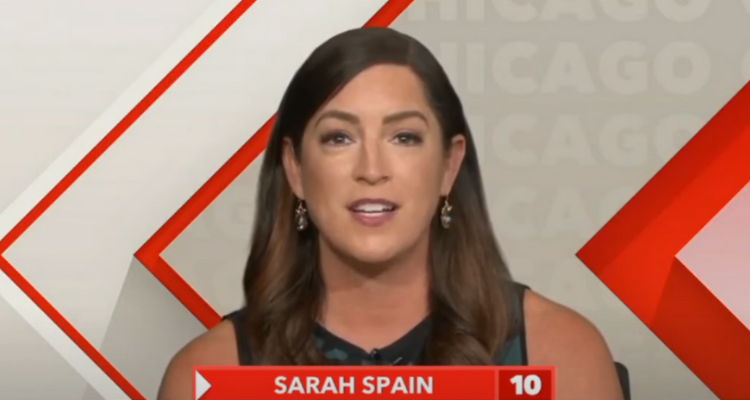 As you can see below it featured a rainbow starburst on the jersey’s sleeve and a rainbow colored logo on the ballcap.

Adam spoke to the press and explained the decision saying, “A lot of it comes down to faith, to like a faith-based decision.”

He elaborated, “So it’s a hard decision. Because ultimately we all said what we want is them to know that all are welcome and loved here,” he said. “But when we put it on our bodies, I think a lot of guys decided that it’s just a lifestyle that maybe not that they look down on anybody or think differently it’s just that maybe we don’t want to encourage it if we believe in Jesus, who’s encouraged us to live a lifestyle that would abstain from that behavior, just like Jesus encourages me as a heterosexual male to abstain from sex outside of the confines of marriage. It’s no different.”

Spain reacted to this decision by ironically calling the players bigots.

She began her diatribes saying, “Pride is about inclusion. So you don’t love them and you don’t welcome them if you’re not willing to wear the patch.”

“And calling it a lifestyle reveals to me that you’ve done not even a modicum of research or understanding on this topic. It’s what tends to happen when a privileged class isn’t affected by things. This is not just about baseball that religious exemption BS, which is used in sport and otherwise also allows for people to be denied health care, jobs, apartments, children, prescriptions, all sorts of rights,” she continued.

She concluded her monologue, “So we have to stop tiptoeing around it because we’re trying to protect people who are trying to be bigoted from asking for them to be exempt from it when the very people that they are bigoted against are suffering the consequences.”

She was then asked to explained what she meant by “trying to bigoted.” Spain answered, “They’re trying to use religious exemptions to affect the opportunities, services, available resources for people who are LGBTQ+.”

When challenged on the idea that wearing a patch on the jersey is doing this, Spain did admit, “In the case of sport, no. In the case of sport though they are double talking if they’re saying you’re welcome while also saying that we don’t encourage or we disagree with it especially when there are devout people of every single religion that also welcome and are open to people who are born gay.”

Spain wasn’t the only Around the horn host to offer an opinion. David Dennis Jr. actually encouraged individuals to speak out against Florida’s recently passed anti-grooming bill that prevents the teaching of gender identity and sexual orientation to students in kindergarten through third grade.

Dennis stated, “If you want to have something that really means anything, while you’re in there in Florida, speak out about the ‘Don’t Say Gay’ bill or do something that really says that you stand for folks that are putting the flag out there and get distracted by these conversations about who’s wearing a patch and who’s not.”

Clinton Yates offered his opinion as well claiming the players objecting to wearing the LGBTQ propaganda patches are progressing backward.

He said, “I point to the Rays from a leadership standpoint on this. You can’t have your players doing this. It makes you look like you’re progressing and you’re completely backwards, and it’s 2022.”

He then made the false equivalency comparing it to military themed uniforms, “Just imagine if four or five guys decided they were going to say this in terms of, I don’t know, military things on their jerseys. People would react completely differently and it’s not all that different. Rays get your house in order. I’m not saying that you have to suspend these guys, but…”

Spain doubled down on her thoughts on Twitter. She wrote, “Bigoted beliefs disguised as ‘religious exemptions’ are B.S.”

She added, “They’re especially dangerous when they allow for people to be denied healthcare, jobs, housing, etc. but also dangerous when used to reject inclusivity efforts in sport, sending a message that not all are accepted.”

“There are members of every religion who support, include, accept, love and *ARE* LGBTQIA,” she asserted.

Next, she wrote, “Using your religion as a shield for ignorance & bigotry is antiquated–and it’s a choice. It’s a choice made of privilege: You’re not affected by the policies & laws that discriminate. You’re not endangered by the hatred that bubbles”

“It’s a choice made of ignorance: You use faith to disguise fear of the unknown & you choose not to learn or evolve. You selectively pick & choose Bible verses to ignore and/or modernize while clinging to a hate-filled interpretation of LGBTQ that’s eons past being relevant,” she tweeted.

Finally, she concluded, “I’m sick of just allowing it because we’re tip-toeing around religion as some sort of third rail. It’s not religious discrimination to tell you to stop discriminating!”

“Your faith is not an excuse for being an asshole. It’s 2022. Evolve or die,” she declared.

The Catholic Church’s teaching on homosexuality is quite clear and has been for thousands of years despite Spain’s blatant lies in an attempt to justify her wrongly-held position.

The Catechism of the Catholic Church states, “Homosexuality refers to relations between men or between women who experience an exclusive or predominant sexual attraction toward persons of the same sex. It has taken a great variety of forms through the centuries and in different cultures. Its psychological genesis remains largely unexplained.”

The Catechism continues, “Basing itself on Sacred Scripture, which presents homosexual acts as acts of grave depravity, tradition has always declared that ‘homosexual acts are intrinsically disordered.'”

“They are contrary to the natural law. They close the sexual act to the gift of life. They do not proceed from a genuine affective and sexual complementarity. Under no circumstances can they be approved,” it asserts.

The Catechism continues, “The number of men and women who have deep-seated homosexual tendencies is not negligible. This inclination, which is objectively disordered, constitutes for more of them a trial. They must be accepted with respect, compassion, and sensitivity. Every sign of unjust discrimination in their regard should be avoided. These persons are called to fulfill God’s will in their lives and, if they are Christians, to unite to the sacrifice of the Lord’s Cross the difficulties they may encounter from their condition.”

“Homosexual persons are called to chastity. By the virtues of self-mastery that teach them inner freedom, at times by the support of disinterested friendship, by prayer and sacramental grace, they can and should gradually and resolutely approach Christian perfection,” the Catechism states.

What do you make of Spain and her fellow ESPN hosts’ commentary?