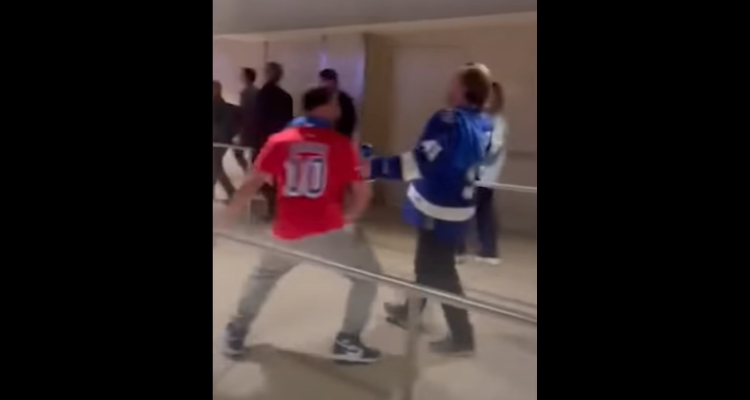 The Garden faithful filed into the iconic arena that Thursday with high hopes of their Boys in Blue coming away with a 3-2 series lead against the two-time defending Stanley Cup Champion Tampa Bay Lightning.

Lindgren gets the @NYRangers on the board first! #StanleyCup pic.twitter.com/eYV5xbO7s1

Rangers fans had the hope of victory within grasp until the dwindling minutes of the second period when Tampa’s Mikhail Sergachev evened the score.

Sergachev ended the Ranger’s hope of victory at the 18:10 mark of the third period when he launched a shot from the near circle that Ondrej Palat deflected into the net for a dagger-to-the-hearts-of-Rangers-fans go-ahead goal.

The @TBLightning take a 2-1 lead late in the third! #StanleyCup pic.twitter.com/YDqhavnuYD

An Empty-netter sealed the deal in the Lightning’s third straight victory as the reigning champs took a 3-2 series lead.

A deflated Ranger’s crowd filed out of the Garden, where the now infamous viral video shows 29-year-old James Anastasio of Staten Island sucker-punching a giddy Lightning fan walking behind him — knocking him out cold.

The “thud” of the Lightning fan’s body hitting the ground can be heard clearly in the video — a sound the fan’s brother says he will never forget.

“The thud. You can hear it in the video. I’ll never get that sound out of my head — my brother’s head hitting the ground,” the fan’s brother (who asked to remain anonymous) told NBC New York.

“We were just trying to get out of there like everyone else and then, all of a sudden, a beer was thrown at us, and me and my brother kind of separated in that second,” the brother recalled.  “The next thing I know, I look over, I hear a thud on the ground and it’s my brother laying there.”

After knocking out the Tampa fan, Anastacio tried to flee the scene when a good Samaritan who observed the altercation confronted him. Anastacio allegedly punched this man in the face as well. Authorities arrested Anastacio a few hours later.

An NYPD spokesperson told Newsweek that Anastasio was charged with two counts of assault, disorderedly conduct and harassment.

Madison Square Garden issued a statement that Anastacio has been banned for life due to the incident.

“Last night, an abhorrent assault took place against a Tampa Bay fan at the conclusion of the game — followed by a second assault against an individual who bravely intervened,” The MSG statement said.

“Frist, we ensured the victims received appropriate medical care and have followed up to provide support from our guest services team. Equally important, we are cooperating fully with law enforcement as this is now a criminal matter. The assailant will also be banned from The Garden and all other MSG venues for life.”

“All guests – no matter what team they support – should feel safe and respected in The Garden. This has and always will be our policy.”

The father of James Anastacio recently condemned his son’s behavior telling the New York Post, “He made a choice. Sometimes choices in our lives have consequences.”

“There’s nothing to defend. It is what it is. We’ll wait for him to come home, we’ll pick him up, and everything’s OK. Tomorrow’s a new day.”