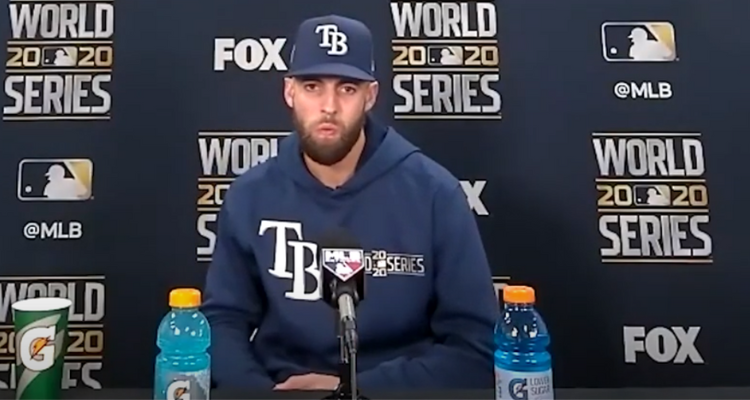 Tampa Bay Rays pitcher Nick Anderson, who is currently on the 60-day injured list, supported his teammates decision to not wear LGBTQ uniforms for the team’s Pride Night against the Chicago White Sox.

At least five of the Rays players including Jason Adam, Jalen Beeks, Brooks Raley, Jeffrey Springs, and Ryan Thompson did not participate in the team’s Pride Night that saw the team sport a rainbow sunburst on their jersey’s sleeves and a rainbow-colored logo on their hats.

Adam spoke to the press to explain the decision to not wear the LGBTQ-themed uniforms saying, “A lot of it comes down to faith, to like a faith-based decision.”

He elaborated, “So it’s a hard decision. Because ultimately we all said what we want is them to know that all are welcome and loved here,” he said. “But when we put it on our bodies, I think a lot of guys decided that it’s just a lifestyle that maybe not that they look down on anybody or think differently it’s just that maybe we don’t want to encourage it if we believe in Jesus, who’s encouraged us to live a lifestyle that would abstain from that behavior, just like Jesus encourages me as a heterosexual male to abstain from sex outside of the confines of marriage. It’s no different.”

The players and the organization would be criticized by a number of ESPN hosts including Sarah Spain on Around the Horn.

Spain stated, “Pride is about inclusion. So you don’t love them and you don’t welcome them if you’re not willing to wear the patch.”

“And calling it a lifestyle reveals to me that you’ve done not even a modicum of research or understanding on this topic. It’s what tends to happen when a privileged class isn’t affected by things. This is not just about baseball that religious exemption BS, which is used in sport and otherwise also allows for people to be denied health care, jobs, apartments, children, prescriptions, all sorts of rights,” she continued.

She concluded her monologue, “So we have to stop tiptoeing around it because we’re trying to protect people who are trying to be bigoted from asking for them to be exempt from it when the very people that they are bigoted against are suffering the consequences.”

Anderson echoed Adam’s comments and rebuked comments like Spain on Twitter writing, “It’s astonishing to me how people don’t understand that different beliefs exist. And because you have different beliefs, in no way, shape, or form does that mean you look down on that individual or think they are lesser.”

“You can love everyone and have differing beliefs,” he added.

Anderson would then be asked by a Twitter user @J_Keane, “Counter point being the same argument turned on it’s head..because the players are accepting that different beliefs exist why not wear the patch and hat in recognition of that.”

Anderson replied, “Alright so let’s say you’re a Liberal. Well we all know different political parties exist. Are you going to wear a Conservative shirt and hat one day just because you want to support Conservatives?”

When the user countered, “LGBTQ isn’t a political issue,” Anderson responded, “Liberal/Conservative question was the first thing that came to mind. The main thing I was pointing out is that people have different beliefs. We can all love each other even when our beliefs are different. You could take my question in to any belief you want.”

Anderson would also respond to another user GamecockGrad, who has since deleted his tweets.

He followed that up saying, “Okay but I didn’t say anything about it. Since you brought it up though, does a person really need a ‘reason’ for why they believe something? Does it really matter why they believe? I personally don’t think so. It’s their belief.”

He concluded his response writing, “If you don’t want to wear a hat or shirt supporting something that I believe in, go for it. And I’m not going to interpret that as you hating me. I have plenty of close friends that have different beliefs than me. Because it doesn’t matter, they are still great people!”

Anderson would also respond to one user, YancyEaton, who called him “close-minded and bigoted,” saying, “Nah. I really don’t do much on social media because I think it’s corrupted the world. And you can believe whatever you want.”

“Doesn’t mean I think you’re a bad person or we couldn’t even be friends. But it feels like you have that feeling towards me… Who’s close-minded now,” he finished.

He stated, “When I say differing beliefs, I’m talking about the people who believe everyone should wear something and if you don’t, you should burn and are a terrible person or whatever name you want to call them.”

“I also was saying that just because you don’t wear maybe a said ‘patch’ doesn’t mean you think those people should burn and are terrible people. Come on everyone, “he implored.

He then asserted, “I never once said I thought gay people weren’t born gay. Or that homophobia was right. So to all of you trying to find any little thing to twist and make someone look bad for saying something that they never said, whatever you say got going on in your life making you this way, just know that it will all be okay! Much love.”

What do you make of Anderson’s comments?