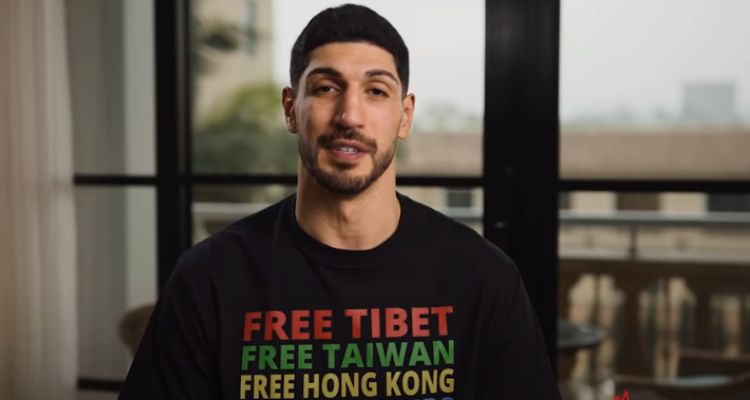 Former Boston Celtics Center Enes Kanter Freedom, who is currently a free agent going into the 2022-23 season recently described the NBA as “one of the most evil radical organization” and claims they are trying to push him to early retirement.

Kanter Freedom made his opinion known while speaking with TMZSports when he was asked if he would be on the court this year.

Kanter Freedom answered, “I hope so, man. They’re pushing me to retire age of 30, unfortunately. You know when you talk about some of the uncomfortable situations are happening around the world and when your organization that you play for 11 years got tied up billions of dollars with that dictatorship, unfortunately, it’s tough.”

He elaborated, “They stand up for things until it affects their money or business. And someone had to expose them and someone finally exposed them and from first hand.”

When asked what advice he would give to other athletes who want to have a political voice, Kanter Freedom said, “Have some courage because well, what I’m talking about is not politics. It’s human rights. And human rights is above politics.”

“So I’m going to do whatever I can to bring awareness and be the voice of all those innocent people out there who don’t have a voice, that’s one,” he asserted. “And two, have some morals. Have some principles, Have some values. It’s more important than money and business. Put yourself in their shoes if your mother, if your sister, if your daughter was in those concentration camps getting tortured and raped every day, would you still care about your paycheck?”

He concluded, “So all these athletes out there right now, shame on them.”

Kanter Freedom would elaborate on his thoughts in an interview with Bobby Burack at OutKick.

When asked if he believes he’s not on a NBA team right now is because he speaks out against human rights violations in China and Turkey, Kanter Freedom bluntly answered, “Let me give you a very easy stat, it is not rocket science: last year, I played for the Portland Trail Blazers and averaged a double-double. We made the playoffs. And they are telling me that six months later, I forgot how to play basketball?”

“Even the kids on the streets will laugh at that notion. I believe I could start in many cases right now, but because the things I say are hurting the NBA financially, they wanted me out of the league. It’s that simple. I just turned 30, and they are pushing me to retire. I can play another six or seven years easily. But unfortunately, with a league like this and with the players in it like this, it looks like it’s not possible,” he added.

He would also go on to claim that Silver is a hypocrite and the NBA is “not genuine.” When asked if he knew that speaking out would cost him his career and if he would still do it, Kanter Freedom replied, “I would do this every time. No question.”

He explained, “Why? While they are playing basketball right now, there is a genocide happening on the other side of the ocean. There are three to four million people in concentration camps who are tortured every day. And Uyghurs are not the only ones — you see what’s happening in places like Hong Kong, Tibet, Taiwan and Mongolians. So this is bigger than my next paycheck. Of course I would do it all over again.”

He then asked Burack, “Let me ask you this, Bobby: would the NBA and these companies stand with Taiwan if China invades like they have Ukraine?” Burack responded, “No way,” to which Kanter Freedom replied, “Right, no way. Adam Silver is the biggest hypocrite of them all. The NBA is not genuine.”

Enes Kanter Freedom was drafted third overall in the 2011 draft by the Utah Jazz. He played for the Jazz for three seasons and has since played for Oklahoma City, the New York Knicks, Portland Trailblazers, and most recently the Boston Celtics.

What do you make of Kanter Freedom’s comments? Do you think the NBA is driving him out of the league because of his comments criticizing China and Turkey?