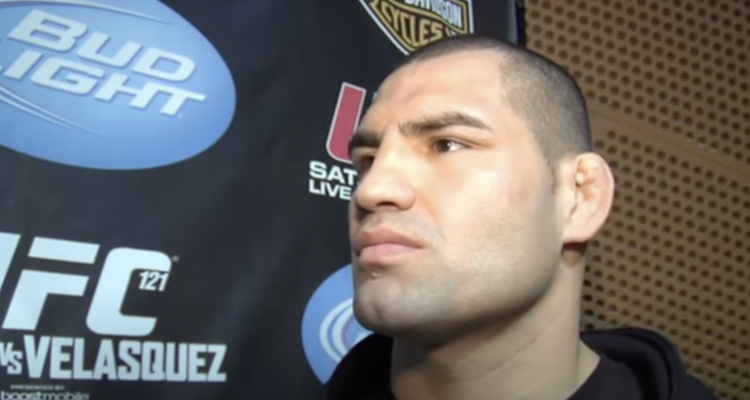 Man Accused Of Being Involved With The Alleged Sexual Abuse Of UFC Fighter Cain Velasquez’s Child Requests To Delay Civil Lawsuit, Calling It A ‘Witch Hunt’

The tragic story of Cain Velasquez continues onward as attorney’s representing accused child molester Harry Goularte have filed an additional civil lawsuit against the former UFC fighter and also requested in motion to the judge that the civil case be postponed until the initial criminal proceedings have reached a verdict.

The situation began months back when Velasquez was informed of supposed sexual abuse against his son. Enraged, Velasquez chased down Goularte’s truck in an “11-mile, high speed chase” in San Jose.

Upon ramming Goularte’s truck, Velasquez began to open fire on the man from his 40-caliber handgun. Goularte’s stepfather, who was also in the vehicle as well as another relative, was struck by two of the bullets. Police intervened before the situation escalated even further.

Paul Bender, Goularte’s stepfather who was injured by Velasquez during the dangerous pursuit, has “provided 14 affirmative defenses and requested a jury trial” according to court documents obtained by MMA Junkie.

Bender, his wife Patricia Goularte, and his stepson Harry who is at the center of all of this, were sued by Velasquez in April of this year on the grounds of the accused sexual abuse taking place in the daycare operated by the family. The Washington Post reports “the lawsuit accuses Goularte of exposing himself to, disrobing and touching the genitals of the 4-year-old boy.” The lawsuit came after Velasquez was charged with attempted murder in February.

According to Velasquez’s suit, he accuses Bender specifically of having “fostered, maintained, and allowed an environment for its attendees to fall victim to sexual abuse at the hands of [Goularte].” The suit does note that Bender did not work at the facility, but given he was a resident he had “daily access to the attendees/children.”

At this time, Bender still claims to have no knowledge of this accused behavior occurring, and that he should not be held responsible for what may or may not have occurred between his stepson and Velasquez’s child. Attorney’s representing Bender claim that Velasquez’s suit “lacks facts.”

Following Bender’s countersuit, his attorney’s requested a motion to postpone the case until after the criminal lawsuit against Velasquez reaches a verdict, primarily to see whether or not the accusations of molestation placed on Goularte actually happened.

The motion put forth by Bender’s attorneys states, “While he [Bender] is not named in the criminal complaint and denies that he was involved in any offending actions, he is nonetheless asserting his fifth amendment right due to the nature of the allegations raised in this case, which accuse him of participation in the events and of covering up the alleged crimes, and because his defense are in part predicated on Harry’s criminal guilt or innocence.”

“The alleged molestation is at the heart of this civil action,” the motion continues, “While the rush to judgement is understandable in this type of situation, it is important to not conduct a witch hunt against the defendants and allow them to mount a full and fair investigation of their own to aid in their defense. Although Paul is not the subject of criminal investigations or proceedings, at this time, his defense relies almost entirely on the testimony of third parties who are criminal defendants.

“All of the alleged wrongdoing against Paul is dependent on whether a molestation actually occurred as described in the complaint. The testimony of Harry and Velasquez will determine if there is any liability against Paul or any of the other defendants.”

Amidst all of this, UFC President Dana White as well as other MMA professionals and public figures have come out in defense of Valesquez, even writing letters to the judge overseeing his case offering defenses of his character.

Some of the individuals standing up for Velasquez publicly include former UFC lightweight champion Khabib Nurmagomedov, Colby Covington, and Yair Rodriguez.

What do you think of the request to postpone the civil case against Velasquez until after the criminal proceedings are over?