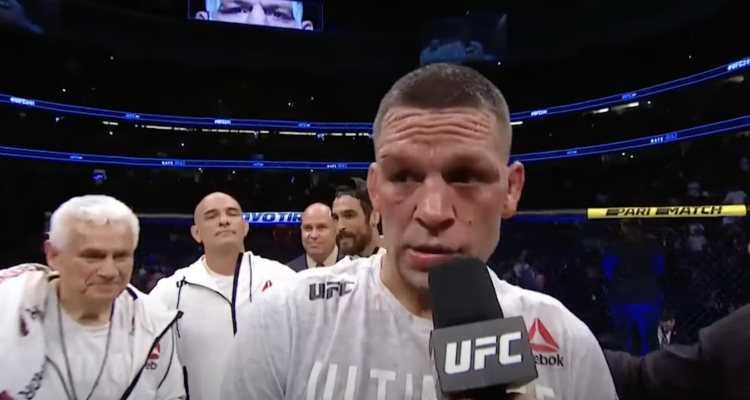 Months of complaining online and across various interviews might be coming to an end for UFC fighter Nate Diaz, who may be seeing an end to his contract within the near future whether he takes on one final fight or not.

Diaz has been waiting to take on his last contractually obligated fight with the UFC for almost a year now, and the last few months has been very vocal about his desire to move on to pursue other opportunities, such as a teased fight with YouTuber and boxing promoter Jake Paul.

In June, Diaz spurred attention when he posted a clip of Paul’s fight with former UFC champion Tyrone Woodley, saying “Ufc release now please or give me fight with anyone in July or august I have bigger s*** to do.”

Ufc release now please or give me fight with anyone in July or august
I have bigger shit to do pic.twitter.com/xyYSCBysLs

It didn’t stop at tweets though. On a recent appearance on The MMA Hour, Diaz continued to vent his frustrations about not being given a final fight yet, going as far as to say that the UFC was holding him “hostage.”

“I was trying to get this s— on the road, but they don’t want me out of contract and they’re keeping me in there and they’re holding me hostage,” said Diaz. “And I want out. That’s my main objective here… I appreciate the UFC, but they’re valuing me in private, but I’m devalued in the public.”

“We can’t hold guys hostage. It’s not possible,” White replied. “I owe you three fights a year. If I don’t fight you three times a year, I have to pay you. How can I hold him hostage?”

“What do you think my plans are? I’m going to get him a fight,” White continued. “I don’t know (when). We’ll see what happens. I have to get him three fights a year. I offer fights, and he either accepts them or turns them down. Obviously I’m not paying him, so I’ve offered him fights.”

White’s claim that he has been trying to get Diaz a fight on the calendar goes against what Diaz has been saying for months. Diaz took to Twitter calling out White once more, saying that White seemed to be looking for excuses during the conference.

“Dana said Francis Ngannou was injured and couldn’t fight right now,” said Diaz. “Idk [I don’t know] why he was so confused in interview.”

Diaz continued, “And in the last 9 months I been offered 0 fights and I asked for 5 legitimate opponents.. Thanks u for the kind words can I go now.”

Diaz might have his wish granted soon though. ESPN reporter Marc Raimondi reported that after diving into Diaz’s contract, the fighter is actually approaching a “sunset clause” before the end of this year.

Do you think White will give Diaz a fight before the end of the year or will Diaz somehow get let go from his UFC contract to pursue other opportunities?