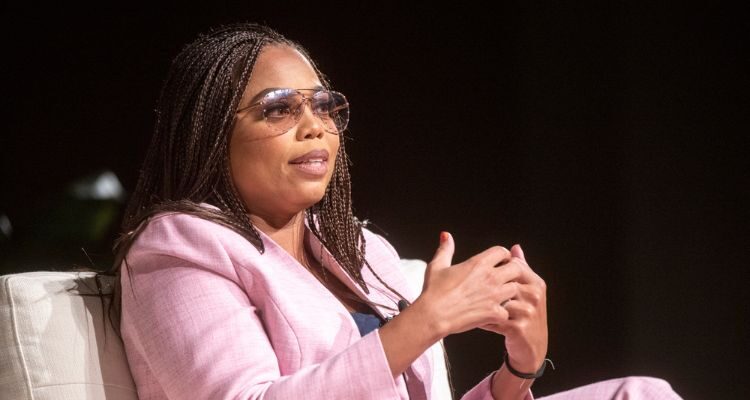 Griner was arrested in Russia back in February on drug charges and recently pleaded guilty telling the Russian court, ““I’d like to plead guilty, your honor. But there was no intent. I didn’t want to break the law.”

In a recent promotional video for HBO’s The Shop, James commented on Griner’s arrest saying, “How can she feel like America has her back? I would be feeling like do I even want to go back to America?”

James would clarify those comments on Twitter writing, “My comments on ‘The Shop’ regarding Brittney Griner wasn’t knocking our beautiful country.

He added, “I was simply saying how she’s probably feeling emotionally along with so many other emotions, thoughts, etc inside that cage she’s been in for over 100+ days! Long story short #BringHerHome.”

James’ entertainment brand, Uninterrupted, would post the “full convo” with James being asked, “You, being you, LeBron James, have you thought of like what if it was you — you travel to Europe. You do these things. Like have you put yourself there in terms of like man, what she must be going through? Or what that experience must be like?”

James replied, “I was trying to imagine it and it’s hard for me to even put myself into what she’s going through. She’s such a great human being. A great person. Obviously I’ve been in her presence a few times. And you always feel like you know if you’re from a certain place you always feel like they got your back. And in a sense like now how could she feel like America has her back?”

He continued, “Like I would be feeling like do I even want to go back to America if I’ve been gone for over 130 days? And I felt like it’s been zero effort.”

#TheShop was started for the real talk happening in our community, uninterrupted. We got people speaking about BG & need to keep ’em talking.

The louder we get for BG, the better.

Hill responded to the clip and defended James writing on Twitter, “The fact that some people are trying use this as some kind of gotcha moment with LeBron is ridiculous.”

She added, “Very clear what he said. There are just some people who are intent on misunderstanding.”

RELATED: Enes Kanter Freedom Rebukes LeBron James: “You Are Free To Leave Buddy Or You Can Even Volunteer For An Exchange For Her”

James praised Hill for defending him saying, “More wisdom from one of the realest ones. Appreciate you Jemele Hill.”

However, James’ comments and Hill’s defense don’t make any sense because Brittney Griner broke the law, and has even pleaded guilty. And drug possession isn’t just illegal in Russia. It’s illegal in the United States of America as well.

Just because Griner happens to be a WNBA player doesn’t mean she should be getting special treatment from the United States government when she’s been arrested in a foreign country for breaking their drug laws. A crime which she pleaded guilty to.

In fact, the U.S. Department of State makes it abundantly clear on their website that Americans traveling abroad “are subject to the local laws and regulations while visiting or living in the country – follow them.”

It also makes it clear that “we cannot get U.S. citizens out of jail” or “state to a court that anyone is guilty or innocent.”

Instead of whining and complaining about the United States not doing enough to help Brittney Griner, maybe Griner shouldn’t have broken Russian law in the first place. And that begs the question why should the United States have someone’s back when they break a law?

As for Hill’s defense of James, aside from her and James, people aren’t intent on misinterpreting his comments. His comments are woefully ignorant and he used Griner’s crime to bash America. As Hill declares, “It’s very clear what he said.”

What do you make of Hill’s defense of James?