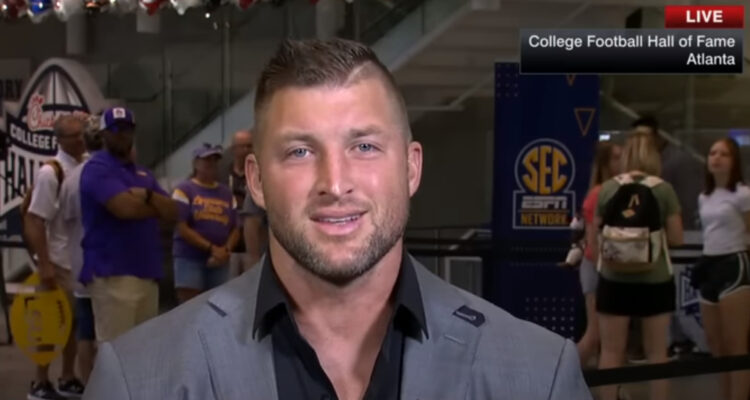 Tim Tebow: “Jesus Has Commanded Us To Defend The Weak, Protect The Poor, And Fight For Hurting People”

Tebow wrote on Twitter, “Jesus has commanded us to defend the weak, protect the poor, and fight for hurting people. There are a lot of people around the world who are hurting, who are vulnerable, who need us to fight for them.”

He concluded, “This means we have a big job to do, one that matters. Let’s go get it done.”

Tebow recently spoke about his commitment to take his own advice during an acceptance speech for the Sports Impact Award at the K-LOVE Fan Awards.

The Heisman Trophy winner told a personal story, “When I was 15-years-old I had the opportunity to meet a boy in the jungles of the Philippines who was born with his feet backwards. And because of that his village viewed him as cursed, as insignificant, as a throwaway. But that day I knew that he wasn’t a throwaway to God and he better not be a throwaway to me.”

Tebow continued, “And, you know, up until then and even so many times after that in my life, I’ve been chasing — someone that’s been chasing dreams to be the best, to win championships, to win MVPs, to try to be the best. And there’s nothing wrong with that, but ultimately on that day and so many days after, God has opened my eyes to what does it mean if you actually are an MVP, if you do it, to be the most valuable player.”

“Because ultimately that day He impacted my heart. That the MVP I should be chasing is the most vulnerable people around the world,” he declared.

RELATED: Tim Tebow: “There Is Only One MVP And He Died On A Cross On A Rescue Mission For Humanity”

He then proclaimed, “Because ultimately, there is only one MVP. And He died on a cross on a rescue mission for humanity. And He has commanded us to go defend the weak, protect the poor, and go after those that are hurting.”

“And let me tell you something, there are a lot of people around the world that are hurting. That means that we have a big job. Let’s go get our job done. God bless you guys,” Tebow concluded.

Not only did Tebow talk about the job we are called to do by Jesus, but on Instagram, he also talked about putting your faith and trust in God no matter what you are experiencing.

He captioned his video message writing, “Keep trusting God. Keep going and taking one step at a time. I don’t know what you’re going through, I don’t know what pain you’re experiencing… but I do know that God promises He can use it for good for those who love Him!”

In the video, Tebow says, “You might ask yourself, I love God, but I experience so much pain, heartache, disappointment, the loss of friends, the loss of loved ones, setbacks in my job, disappointments. But something my sister always says to me, ‘God will never waster your pain when you give it to Him.'”

“You see, guys, even in the midst of our pain, there’s still purpose,” he continued. “There is purpose in the pain. And there can be purpose in your pain.”

“Listen, in living a Mission Possible life, it’s not pain free. There’s still meaning and there still can be great significance. When we look at all the heroes of the Bible, almost every single one of them, through their pain was great purpose. And when they continued to take the next step, eventually, was great impact,” he explained.

“So if you’re going through pain, adversity, setbacks, and heartache, know that when you keep trusting God, and you give that pain to Him, He can create purpose in it. And I believe He will, and I believe He wants to, because He’ll never waste the pain, when you give it to Him. There’s purpose in your pain,” he concluded.

What do you make of Tebow’s message?