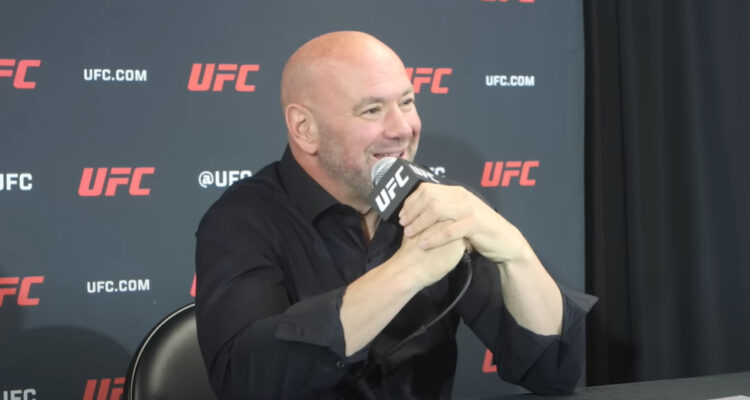 UFC President Dana White recently spoke to the media where he fielded a number of questions concerning YouTuber and celebrity boxer Jake Paul.

White was asked by one of the reporters about Jake Paul’s recent comments about White during an interview to which White quickly shut it down, interrupting the reporter saying, “Is this still  something? Is this still a thing? It isn’t to me. I could care less. He’s a pay per view turd.”

When asked if he was open to giving Paul a chance to fight in the UFC, White replied, “I would never say never. It’s the last f***ing thing on earth I’m thinking about.”

White then addressed the rest of the reporters saying, “I can tell you guys are done with me now if we are getting into f***ing Jake Paul questions.”

However, the next reporter would continue with Jake Paul, asking about the upcoming fight between Rahman Jr. and Jake Paul.

White replied, “Well, he just got knocked out (referring to Rahman Jr.). Why wouldn’t you go after the guy who knocked him out?”

When the reported replied, “That’s a tougher fight,” White answered, “That’s not the business I’m in. I’m in a different business than that. I’m in the tough fight business.”

White would then be asked about Logan Paul and whether he might be get the opportunity to fight in the UFC.

He answered, “Well, I like Logan Paul. But I just don’t — I would never say never that, ‘Oh I would never do that.’  Every Tuesday I go into matchmaking and we don’t talk about that kind of stuff.”

Later, White would again be asked about the upcoming fight between Jake Paul and Rahman Jr. and the fact that it’s being broadcast on Showtime, where he described Paul as a “weasel.”

“I know you guys love to ask me this stupid s***,” White continued. “This is not what I do. And I’m at the point like, you know it’s all the stuff’s going back and forth, it’s just getting — it’s silly. It’s silly for me to even f***ing talk about this. It’s silly.”

Paul has regularly tried to create beef with White via social media. Most recently he claimed that White has been hiding from him since last year.

Paul tweeted, “The facts are the facts. Conor should have learned from his boss Dana White that I’m not the one to play with it. Dana been hiding from me since last year.”

The facts are the facts. Conor should have learned from his boss Dana White that I’m not the one to play with it. Dana been hiding from me since last year. pic.twitter.com/y9wbMhmWIs

Back in January he posed for a photo with three women wearing shirts and holding signs that read, “F*** Dana White.”

On January 1st he even challenged White to let him fight Jorge Masvidal and said he would retire from boxing if White increased the minimum fighter pay per fight to $50,000, guaranteed fighters 50% of UFC’s annual revenues, provided long term healthcare to fighters.

Paul even created a music video titled “DANA WHITE DISS TRACK” that he released at the end of January.

What do you make of Dana White’s comments on Jake Paul?

NEXT: The Top 5 Fights The UFC Needs To Make Happen Before The End Of The Year