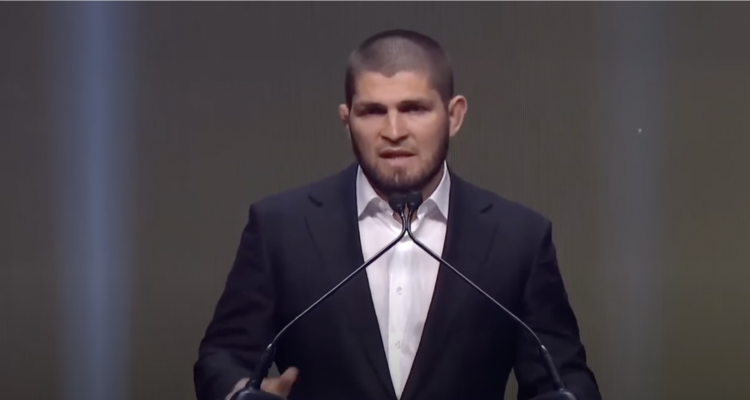 WATCH: UFC Legend Khabib Nurmagomedov Reflects On His Father And Career During His UFC Hall Of Fame Induction Speech

UFC legend Khabib Nurmagomedov was inducted into the UFC Hall of Fame last week, which gave him the opportunity to reflect on his historic career.

During his induction speech, Khabib talked about his success compared to other ordinary people who worked just as hard and called it a test from God to see how he would handle it.

Khabib talked about the impact his father’s death had on his life. The 33-year-old said his mindset was completely different 10 years ago. He was going to be champion, become rich and buy everything. Then what happened over the past two years changed his way of thinking.

Khabib’s father and coach Abdulmanap died on July 3rd, 2020, due to COVID-19 related health complications. Almost two years to the day of his UFC Hall of Fame induction.

“My father is not with me, and it’s a very hard time to stand here and talk about him. It’s very emotional for me,” he admitted.

He talked about his father training him, getting him ready for the pressure of big arenas, and making him hungry to win.

Khabib talked about his serious injuries and his father’s advice not to give up everything he’d worked for. His father had an enormous impact on his career.

Just a few months after his father’s death, Khabib defeated Justin Gaethje to unify the UFC lightweight championship. After the fight, he announced his retirement.

Khabib would solidify his legacy as an all-time great by retiring as a champion who went undefeated (29-0) during his MMA career.

Khabib has traded in his former career for a new one. Now, he’s coaching fighters, most notably childhood friend and rising lightweight star Islam Makhachev.