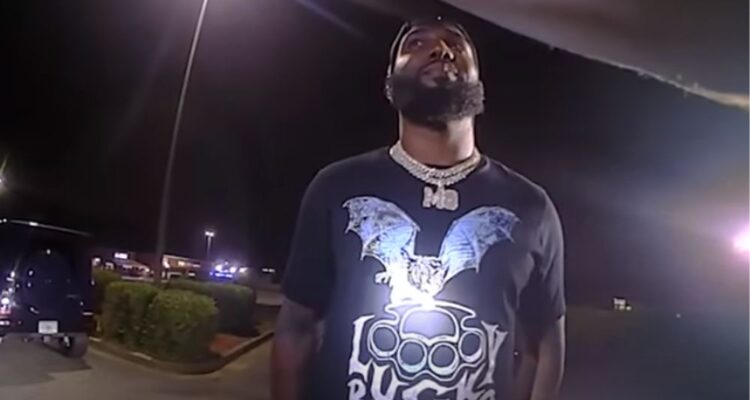 Marcell Ozuna continued to show poor judgment on Thursday night. The beleaguered outfielder was arrested for DUI in Gwinnett County, Georgia following the Braves’ 3-2 victory over the division rival Mets.

“The Atlanta Braves are aware of Marcell Ozuna’s arrest this morning and are still gathering all the facts pertaining to the incident,” the organization said in a statement Friday. “Our organization takes these matters very seriously and are obviously disappointed by the situation. As this is a legal matter, we will have no further comment until the process is complete.”

You can watch the police bodycam footage of Ozuna being arrested below:

This arrest comes a little over a year after Ozuna was arrested for a domestic violence incident where he was caught on police body cam choking his wife.

The Braves placed Ozuna on administrative leave following his domestic violence arrest through the end of 2021. After his felony charge was reduced to two misdemeanors the MLB gave Ozuna a retroactive 20-game suspension and allowed him to return to the team for the start of the 2022 season.

“My office has completed its investigation into the allegations that Marcell Ozuna violated Major League Baseball’s Joint Domestic Violence, Sexual Assault and Child Abuse Policy,” MLB commissioner Rob Manfred said in a release. “Having reviewed the totality of the available evidence, I have concluded that Mr. Ozuna violated our policy and that discipline is appropriate.”

Prior to spring training, Ozuna offered an apology “My fans, I’m going to give you the best,” he said, “and I’m going to be a better person, and I’m sorry.”

Ozuna’s most recent arrest is another embarrassing moment for the defending world champs as they try to defend their crown. The Braves signed Ozuna to a 4-year, $65 million deal after he hit .338 with 18 home runs in the Covid shortened 2020 season.

That deal will easily go down as the worst decision of the Alex Anthopoulos era. The supposed power-hitting outfielder has been a below-replacement level player since signing the deal according to baseballreference.com.

Even prior to his arrest, Ozuna had been removed from the everyday lineup due to poor play. He was out of the lineup and did not have an at-bat for all four games of a crucial series with the division leading Mets.

The team continues to stand by him following his most recent arrest. He’s again not in the lineup for Friday’s game against Houston, but he’s on the roster and dressed for the game just hours after being released by Gwinnett County Police.

The Braves found themselves in a similar situation in 2016. Recently acquired outfielder Hector Olivera was arrested on domestic violence charges. Three months later Olivera was traded to the Padres for Matt Kemp in what was essentially a salary dump as the Padres promptly released him.

The Braves front office did the right thing in 2016. Even though they had given up multiple players to obtain Olivera less than a year before, they immediately realized he represented a sunk cost and Olivera never played a game for the Braves, or any other MLB team, following his arrest.

It’s well past time for the Anthopoulos led regime in Atlanta to follow suit. Ozuna isn’t just a hole in the Braves lineup he’s an embarrassment to the fanbase, of which this writer is a lifelong member.

Ozuna is owed $41 million dollars over the next two years. The Braves have no recourse to get out of that contract. However, considering the liability of continuing to have Ozuna associated with the team and the organization’s record profits, the Braves could easily afford to eat the remainder of the money he is owed.

Alex Anthopoulos and the Braves need to show that unlike Marcell Ozuna they are capable of making the right choice. $41 million dollars is a tough price to pay, but it’s time for the Braves to own up to their mistake and get rid of Ozuna.

NEXT: WATCH: Bodycam Footage Shows Police Dragging Marshawn Lynch From His Vehicle As He Appears To Nod In And Out Of Consciousness