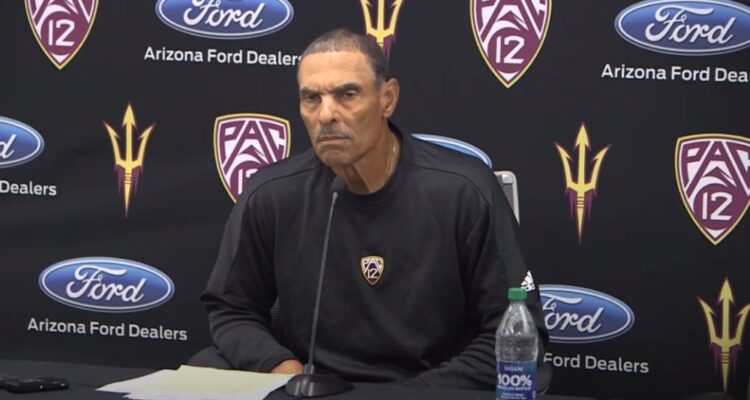 Arizona State University fired Herm Edwards from his position as the team’s head football coach. The school announced its decision following the Sun Devil’s 30-21 loss to Eastern Michigan on Saturday.

“We have made the decision to make a change in the leadership of our football program, effective immediately,” Athletic director Ray Anderson said via social media.

“By mutual agreement, Coach Edwards and I have determined that he will relinquish duties as our head coach. At the core of this is doing what is best for our current team, staff, and university. I understand the frustrations out there. We must do better and that starts with our decision today,” he concluded.

After being fired from the Chiefs, Edwards was a fixture on ESPN”s NFL coverage. His return to coaching did not go as planned. After some early signals for optimism including an upset of then No. 15 Michigan State in the second game of his tenure. Coach Edwards was never able to keep the momentum going.

Compounding a lack of success on the football field Arizona State is still under investigation for recruiting violations that allegedly occurred under Edwards’ watch. ASU is being investigated for “hosting high school prospects during the recent COVID-19 dead period,” among other violations.

“ASU can confirm the NCAA is conducting an investigation regarding allegations related to our football program,” Arizona State vice president of media relations and strategic communications Katie Paquet said. “In accordance with NCAA bylaws, the university cannot provide further comment at this time.”

RELATED: University Of Oregon Apologizes For “F*** The Mormons” Chant During Saturday’s Game Against BYU

Arizona State’s hiring of Herm Edwards was seen as unconventional at the time. Edwards had not coached in the college ranks since 1989 and had not coached at all since 2009 when he was hired in 2018.

The plan was to have Edwards operate as a CEO more similar to an NFL model of running a team than your typical college team. However, Edwards’ lack of experience in the college landscape specifically his lack of knowledge concerning the NCAA’s bylaws proved too much to overcome.

Edwards reportedly delegated much of his power to his top assistant and fellow former ESPN analyst Antonio Pierce. “What AP says, I’m saying, so listen to AP and do what he says.” Edwards reportedly said to his coaching staff during a recruiting meeting.

The veteran coach may have been placing his trust in the wrong hands as many of the alleged allegations are reportedly traced back to Pierce.

Arizona State has long been considered a sleeping giant in college football. They are well funded with good facilities and a legitimate fanbase. The school has not been able to find the right leader to awaken the program as they have not made a Rose Bowl appearance since 1996.

With historical Pac-12 juggernauts USC and UCLA set to depart to the Big Ten in 2024, the Sun Devils could be one good coaching hire away from a spot at the top of the Pac-12.

What do you make of Arizona State’s decision to fire Herm Edwards?

NEXT: South Carolina Head Coach Shane Beamer Apologizes After Shouting “Get Off The Field” At Female Student-Athletes