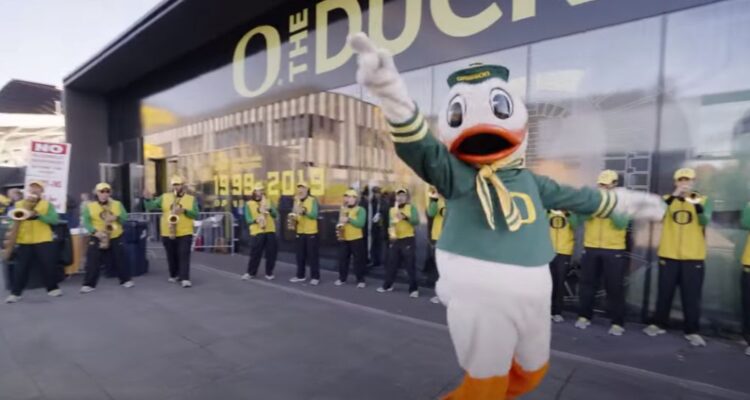 The University of Oregon issued a public apology via Twitter for a “F*** the Mormons” chant being shouting during the football team’s game against Brigham Young University (BYU) on Saturday.

Brigham Young University was founded in 1875 by Brigham Young and “is founded, supported, and guided by The Church of Jesus Christ of Latter-day Saints.” Members of the church are commonly called Mormons.

Following Oregon’s drubbing of BYU 41 to 21, the University of Oregon issued an apology on Twitter.

It began, “The University of Oregon sincerely apologizes for an offensive and disgraceful chant coming from the student section during yesterday’s game against Brigham Young University.”

“We can and will do better as a campus community that has no place for hate, bias, or bigotry,” they concluded.

The University of Oregon’s official student section Twitter account apologized following the game writing on Twitter, “To all BYU Football fans in attendance at todays game we would like to apologize for the actions of the students in attendance”

“We do not condone or support any hateful speech directed towards one’s religion and are ashamed of those who participated,” the account added.

Oregon Governor Kate Brown also issued a statement on Twitter. She wrote, “In Oregon, we strive to be a welcoming, inclusive state to all, regardless of race, religion, gender, or background.”

She then decided to make this singular incident about not just the state of Oregon, but the entire United States, “Our state and nation have an ugly history of discrimination and bigotry. The chant at yesterday’s Oregon-BYU game was unacceptable. We must do better.”

NEXT: Stephen A. Smith Does A Complete 180 On His Rachel Richardson Comments After BYU Investigation Finds No Evidence Of Racial Heckling