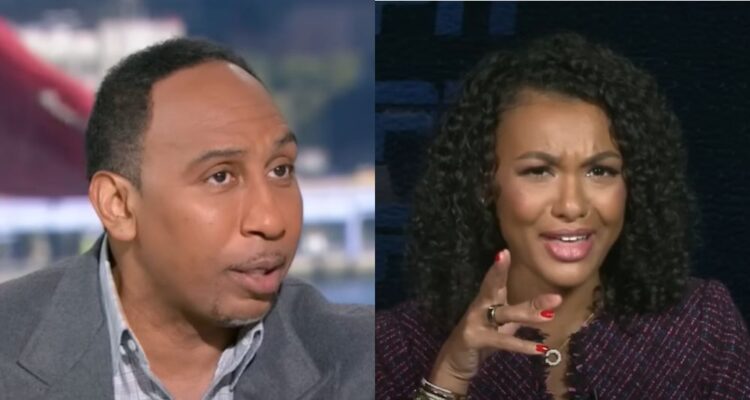 Stephen A. Smith and Malika Andrews via ESPN YouTube

ESPN’s Stephen A. Smith received pushback on his show for his comments on Ime Udoka’s suspension. Udoka was suspended for a year by the Celtics for having an improper relationship with a member of the Celtics staff.

Udoka was suspended this month after leading the Celtics to the NBA Finals last year. His suspension was first revealed in a vague tweet by Adrian Wojnarowski, which he has since deleted.

In the tweet Wojnarowski wrote, “SPN Sources: Boston Celtics coach Ime Udoka is facing possible disciplinary action – including a significant suspension – for an unspecified violation of organizational guidelines. Discussions are ongoing within the Celtics on a final determination.”

The Celtics then confirmed the suspension posting a press release that reads, “The Boston Celtics announced today that the team has suspended Head Coach Ime Udoka for the 2022-23 season for violations of team policies. A decision about his future with the Celtics beyond this season will be made at a later date. The suspension takes effect immediately.”

Since then details have slowly leaked out and the Celtics held a press conference addressing the situation.

Udoka addressed the suspension himself through a statement on Twitter saying, “I want to apologize to our players, fans, the entire Celtics organization, and my family for letting them down. I am sorry for putting the team in this difficult situation, and I accept the team’s decision. Out of respect for everyone involved, I will have no further comment.” Udoka is engaged and has a child with actress Nia Long.

Many around the league seem to think there is more to the story than just an inappropriate consensual relationship, including members of the Celtics.

Celtics star guard Jaylen Brown was asked for his reaction to the allegations against Udoka and whether he’s had any conversations with Udoka.

He answered, “No conversations as far as me on my end. Initial reactions I think I was — we were all shocked at what was going on, a little confused a little bit. A lot of the information wasn’t being shared with us or members of the team. So we can’t really comment on it.”

In addressing another question about Udoka he said, “I wish we had more details. From what we know, it’s hard to make a decision based upon whether it’s consensual or not in the workplace, or whatever is going on, which we know that’s happened before in the workplace. But I guess there’s more to it possibly. We don’t know. I don’t know. I don’t have all the details, not being shared with me. It’s hard to really comment on something that you are not filled in with all the details. I don’t really have a feeling or a comment on my emotions about it because I don’t have the details. ”

“The situation in Boston is deep. It’s messy. It’s 100 times uglier than any of us thought.” former NBA player and current ESPN analyst Matt Barnes said in a now-deleted Instagram post.

Matt Barnes on the situation with ime. He was told what happened and it sounds like it’s pretty bad. pic.twitter.com/PnMZzR2WsW

The Celtics have stipulated that no one else will be punished for this incident outside of Udoka.

On First Take, Smith wondered why only Udoka was being suspended. “Ime Udoka cannot be defended. His actions were egregious, irresponsible to be in the leadership position that he is. I’m not here to make any excuses or any apologies for his behavior. It is in excusable. It’s a fireable offense as far as I’m concerned.”

Addressing Adrian Wojnarowski, Smith continued, “According to your reports, Woj, and what we have been talking about over the last couple of days this was a consensual relationship. Was Ime Udoka involved with himself? The answer to that question is no. Two consenting adults engaged in this act or these actions that were clearly in violation of the Boston Celtics policy. But all we’re hearing about is Ime.”

He then later questioned, “Only he is in violation of the company policy? The woman who elected to have a consensual relationship with him is not in violation? He gets to get mentioned and put on front street. We don’t know who she is. ”

This is why Malika Andrews was angry at Stephen A Smith…when he questioned if the woman involved in Udoka situation violated company policy deserved to get mentioned https://t.co/UnAku2pn7S pic.twitter.com/snJrZ4lPyj

NBA Today host Malika Andrews took offense to what Smith had to say and called in. “Stephen A., with all due respect, this is not about pointing the finger. Stop,” Andrews said. “What became apparent to me in this press conference is that we do not have all the information here. And it was frustrating, to me, that the Celtics declined to elaborate or to give more specifics about what exactly the rule-breaking was that led us to this point.”

She continued, “I think what stood out to me is that Brad Stevens, he was upset, that’s what stood out to me about what he termed rampant Twitter BS is the word that he used. That women were unfairly dragged into this within the Celtics organization. You could see that Brad Stevens was visibly upset about this and I also found that to be gross an unnecessary that folks were bringing in the names and the images of women that is just not a fact. It was purely speculation. To me that is what stood out.”

“But the Celtics as an organization could have done more and short of doing more ahead of this yesterday, they could have owned that responsibility in this press conference. I understand that there were legal parameters that they had to operate within for everybody involved. And I appreciate the fact that they brought in outside counsel and did a thorough organization and I think that is something that was clearly necessary in this situation, but the fact that it was able to go on all day, the fact that we are sitting here debating whether somebody should have been suspended or not, we are not here to further blame women. That is not why we are here,” she concluded.

In response to Malika Andrews confronting him on his own show Stephen A. Smith clarified his position saying, “First of all, let me be very clear, I don’t appreciate where you’re going with that, I’m not blaming anybody but Ime Udoka. He deservers, the fact of the matter is I said, he deserves to be fired if they were going to fire him. If you’re not going to fire him, then don’t fire him. My issue is all of this being publicized.”

Stephen A Smith just went in on Malika Andrews 😭😭😭😭😭😭 pic.twitter.com/2JCBdo9wGr

All the details of this situation may never come out. What we do know is that the championship hopeful Celtics will have a new coach for the 2022-2023 season.

Joe Mazzulla was named as the interim head coach for the upcoming season. Mazzulla will be faced with the tough task of leading this team through this very public scandal and back to the Finals.

NEXT: Kyrie Irving Reveals He Gave Up 4-Year Over $100 Million Contract To Remain Unvaccinated