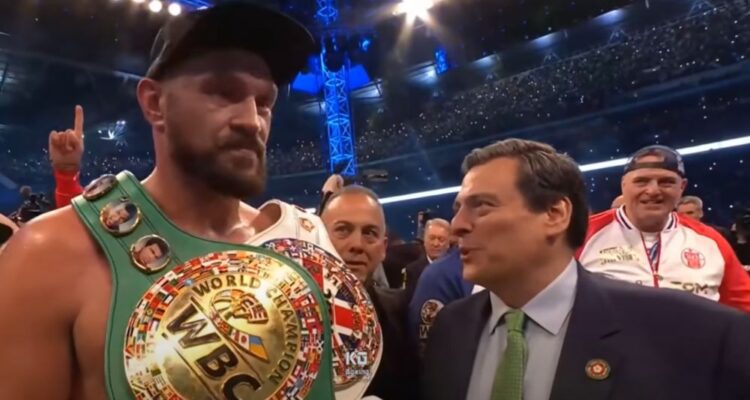 Tyson Fury: “Whatever Your Going Through In Your Life Now Is The Time To Invite God In To Your Life”

Heavyweight boxing champion Tyson Fury aka The Gypsy King recently shared a message to his followers on social media to invite God into their lives.

Fury posted to Twitter, “All praise be to God. In Jesus Name. Even in your hardest times God is with you, whatever your going through in your life now is the time to invite God in to your life.”

He added, “If we knock the door it will be answered, if we seek we will find, if we ask we shall receive.”

Fury also shared an image with a quote from Joshua 1:9 on it. It reads, “Have I not commanded you? Be strong and courageous. Do not be afraid; do not be discouraged, for the Lord your God will be with you wherever you go.”

RELATED: Tyson Fury Demands Harsher Punishments For Knife Crime In UK After Family Member Is Stabbed To Death: “This Needs To Stop”

In a subsequent tweet, the two-time world heavyweight boxing champion wrote, “Be strong & know that God will show us a way, 2022 AD.”

Fury announced his retirement from boxing back in August writing on Twitter, “MASSIVE THANKS TO EVERYONE WHO HAD AN INPUT IN MY CAREER OVER THE YEARS & AFTER LONG HARD CONVERSATIONS IV FINALY DECIDED TO WALK AWAY & ON MY 34th BIRTHDAY I SAY Bon voyage.”

However, like Tom Brady’s retirement from the NFL it was short lived. Fury has reportedly agreed to fight Anthony Joshua on December 3rd.

Joshua’s management team tweeted on the 13th of September, “258 and Matchroom Boxing can confirm, on behalf of Anthony Joshua, that we accepted all terms presented to us by Fury’s team for a fight Dec 3rd last Friday.”

They added, “Due to the Queen’s passing, it was agreed to halt all communication. We are awaiting a response.”

Fury previously promised he would finish Joshua inside six rounds.

He shared a video on Twitter stating, “I’ll make it nice and quick for you. I’ll do it inside six rounds so you can get out of there in one piece and go home and have a nice little night out on Sunday. Nice and quick, in and out. Get paid and out you go.”

I’ll make it nice and quick for ya @anthonyjoshua pic.twitter.com/2EngHde8xF

Fury is one of the most dominant heavyweight fighters of his generation he has a 32-0-1 record with the sole draw coming in his first fight with Wilder in 2018.

According to Sporting News he has a 69.7% percent knockout rate with Fury finishing his opponent in 23 of his 33 matches. In his most recent fight he knocked out Dillian Whyte with a devastating upper cut to retain the WBC, Ring Magazine and lineal heavyweight championship.