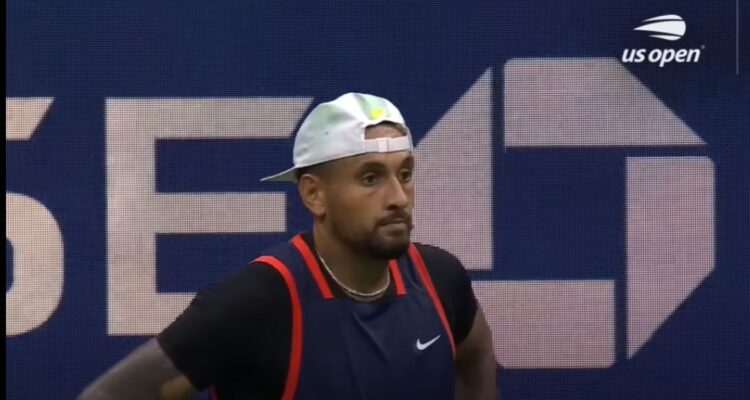 WATCH: Nick Kyrgios Melts Down, Smashes Two Rackets After Losing In the US Open Quarterfinal

Nick Kyrgios the 25th ranked player on the ATP Tour completely melted down and smashed two rackets against the court after he lost to Karen Khachanov in the quarterfinals of the US Open.

Following his loss to Khachanov, who is ranked 31st on the ATP Tour, Kyrgios thanked the Chair Umpire and then just as he is about to return to his seat, he completely loses it and begins smashing his racket over and over against the court. He eventually slams it against the court and it goes flying across the surface.

Not satisfied with just destroying the one racket, Kyrgios went back to his seat and grabbed another racket and preceded to slam it against the court’s surface.

A meltdown from Nick Kyrgios after losing in the US Open quarterfinal! pic.twitter.com/hUTaihlTBF

In a post-match press conference, Kyrgios was asked what he was feeling.

He responded, “Just came out flat. Physically didn’t feel great and then I ended up feeling great towards the end of the match. I’m obviously devastated.”

He continued, “But all credit to Karen. He’s a fighter. He’s a warrior. I thought he served really good today. Honestly, probably the best server I played this tournament, the way he was hitting his spots under pressure. And he just played the big points well.”

“There wasn’t really anything in it. I’m just devastated, obviously. Just feel like it was either winning it all or nothing at all to be honest. I feel like I’ve just failed at this event right now. That’s what it feels like,” he stated.

Kyrgios then downplayed a question about an injury he suffered during the match to his left knee saying, “Just knee’s sore. Obviously, I’ve been playing a lot of tennis the last couple months. Just came out, you know, the court was a little bit — I just split stepped and just tweaked it a little bit and then ended up feeling fine. I got some [inaudible] on it. Everyone’s carrying a bit of a niggle right now. So nothing major.”

“I didn’t end up feeling it towards the third, fourth, and fifth,” he said. “I felt great physically. At the end of the match I felt fine. Just mentally distraught.”

“People don’t really care if you got better on the day or you lost four in the fifth or you played one of the best matches of the tournament you lost,” he asserted. “That’s all people remember at a Grand Slam whether you win or you lose. And I think pretty much every other tournament during the year is a waste of time really.”

“You just front up and show up at a Grand Slam. That’s what you’re remembered by,” he concluded that question.

When asked if defeats hurt more now after having success, Kyrgios responded, “Yeah, they do. I honestly feel — I feel like s**t. I feel like I’ve let so many people down”

“I just feel like I’m playing Tokyo and stuff, but I just feel like these four tournaments are the only ones that are ever gonna matter. And it’s just like you’ve got to start it all again. And I have to wait until Australian Open. It’s just devastating. It’s like heartbreaking and not just for me, just for everyone that I know that wants me to win,” he concluded.

Kyrgios previously defeated the world’s number one ranked player in Daniil Medvedev in the fourth round of the tournament in four sets. He was also fined $7,500 for spitting and swearing in his second round match against Benjamin Bonzi.

Nick Kyrgios was given a warning after spitting and swearing at his own team box 💦🤬#USOpen pic.twitter.com/4CbUREe2Y1

The two Men’s Semifinals matches will take place on September 9th at 3 PM and 7 PM ET. Khachanov will face off against the 7th ranked Casper Ruud. The second semifinal match has not been set, but will feature the winners of the quarterfinal matchups between Jannik Sinner versus Carlos Alcaraz and Andrey Rublev versus Frances Tiafoe.

NEXT: John McEnroe Blasts Politicians For Refusing To Allow Novak Djokovic To Play In The US Open Over His Vaccination Status