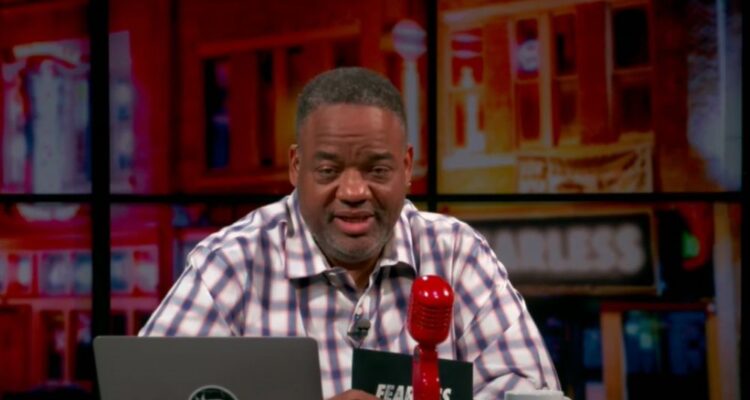 The host of “Fearless with Jason Whitlock,” Jason Whitlock didn’t pull any punches when he called out Tom Brady for having “no sacred honor” for inviting Antonio Brown into his home.

Whitlock’s comments came after news reports detailed Antonio Brown exposed himself to a number of guests in the swimming pool of the Armani Hotel Dubai in Dubai back in May.

There were also reports that Antonio Brown was staying at Tom Brady’s home when he made the move to Tampa Bay from the New England Patriots. Jay Glazer on FOX Sports reported back in 2020 that Brown “has actually been staying at Tom Brady’s house, and Tom has actually been helping him off the field as well, lining him up for people to help him, including people like Tony Robbins.”

How long will the Patriots stick with Cam Newton? Reasons for Dolphins making the switch to Tua? And latest on AB to the Bucs.@JayGlazer breaks it all down: pic.twitter.com/N4uRXwjSj3

Brady had also reportedly invited Brown into his home when he was still with New England. NBC Sports reported back in 2019, “Al Michaels said that Antonio Brown‘s agent Drew Rosenhaus told him that Patriots quarterback Tom Brady offered to let Brown stay with him while the wideout is getting acclimated to New England.”

More recently, Brown shared a photo of himself embracing Brady’s wife Gisele Bündchen following the team’s Super Bowl victory over the Kansas City Chiefs. He captioned it writing, “Put that S**t on.” It’s a reference to his own rap lyrics.

Reacting to the reports about Brown exposing himself at the hotel pool, Whitlock said, “My first thoughts were Tom Brady invited this dude into his house? That’s how bad he wanted to win?”

“And I was like his, his kids live there. And again I know they got a big estate and they can keep Antonio Brown in one wing. And who knows how many days Antonio Brown was actually there or if it was — but my whole thought just went to Tom Brady wanted to win so bad that he invited the biggest idiot in the NFL into home. Ethics, morality, none of it matters. It’s a bad look for Tom Brady,” he said.

Whitlock continued, “Royce White talks about it all the time, and I love it, when he says no sacred honor and that’s what’s missing with men. We have no sacred honor. To get material success, to have career success there’s no lines we won’t cross. ‘Oh we got to get in bed with Antonio Brown, invite him into our home around our wife and kids, we’ll do that. If O.J. Simpson could still run the football we’ll bring him on the team.'”

After referencing an article he had previously read about Antonio Brown that made him realize just how much of a bad person Antonio Brown was, Whitlock asserted, “If Tom Brady is everything he’s supposed to be and having had all the success that he’s had, he should have had wanted to have nothing to do with Antonio Brown, in my opinion.”

Whitlock’s opinion is sure to be divisive. There is something to be said about trying to help Antonio Brown and try and put him on the straight and narrow path. Christ did say the second commandment is “You shall love your neighbor as yourself.”

However, Christ also instructed his disciples that “whoever will not receive you or listen to your words—go outside that house or town and shake the dust from your feet.” In this case, it appears that Brown’s case was the latter and the best option would be to pray for him rather than inviting him into his home.

Further, Whitlock’s point that Brady chose to house him in order to win another Super Bowl makes sense. Not only did he work with Brown to get that Super Bowl, but after his defeat last year he chose to retire only to unretire in short order.

In the Gospel of Luke, Christ also said, “Take care to guard against all greed, for though one may be rich, one’s life does not consist of possessions.”

St. Paul also reminds us in 2 Corinthians 8:21 that “we are concerned for what is honorable not only in the sight of the Lord but also in the sight of others.” There is nothing wrong with wanting to win a Super Bowl, but one should not sacrifice one’s honor and integrity in order to do so.

What do you make of Whitlock’s assertion concerning Tom Brady?

NEXT: Tom Brady Previously Described His Wife Gisele Bündchen As A “Witch” And Detailed How She Engaged In Numerous Rituals