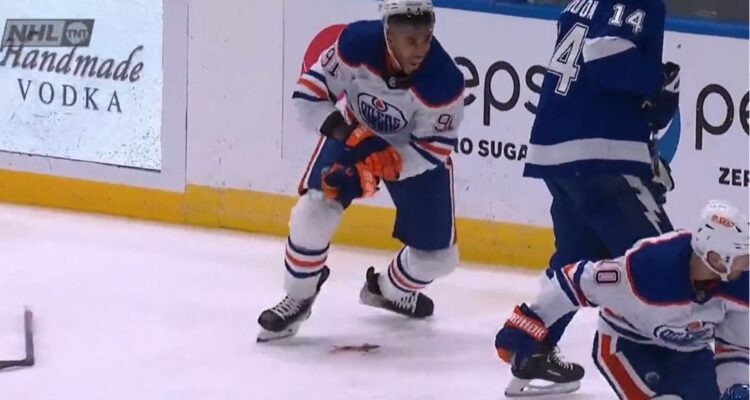 Edmonton Oilers forward Evander Kane had his wrist cut by the Tampa Bay Lightning’s Pat Maroon during their game on November 8th.

Kane was knocked to the ice after a hard check with Tampa Bay’s defenseman Philippe Myers about four minutes into the second period. As he falls to the ice and towards the boards, the puck ends up underneath him.

In a scrum for the loose puck Tampa Bay’s Pat Maroon makes contact with him. His skate appears to slice Kane’s left wrist that was lying on the ice while his knee hits him in the head.

Damn, scary situation for Evander Kane. Had his wrist cut by Maroon’s skate.pic.twitter.com/Fx43QMPTja

As you can see in the video above, Kane immediately gets up, puts his right hand on his left wrist to apply pressure and skates towards his bench while appearing to yell for assistance.

At the time of the incident, The Athletic’s Daniel Nugent-Bowman reported, “Evander Kane is in a bad spot. Blood on the ice. His wrist appeared to get stepped on by Patrick Maroon. Kane got up immediately and bolted to the bench.”

He added, “There are a lot of concerned looks on the Oilers bench.”

Sportsnet Reporter Gene Principe also noted, “This from Edmonton Oilers GM Ken Holland on Evander Kane. He has a deep cut on his wrist. He was stabilized and has gone to the hospital. Kane will have surgery on his wrist. He will be OK.”

He stated, “First and foremost everyone on our team, within our organization, probably most people in Edmonton are thinking about Evander Kane. And when an accident like that happens on the ice that’s where our first thought is. It’s never fun to see one of your teammates in that kind of position. But shoutout to the great medical staff we have within our organization and the people here at the arena that were quick to respond and make sure that he was okay.”

He then added, “The news that I’ve received so far, and it is very limited, is that he’s in a good spot and he’s getting well taken care of.”

“The news that I’ve received so far is that he is well taken care of.”

Bally Sports reporter Gabby Shirley reports Maroon told her and the media, “That’s a scary situation. I hope he’s OK. When you look down and you see that much blood, you know that there’s something wrong … the boys are really worried about him so we’re all thinking about Evander.”

He added, “That’s a scary situation and I would never wish that upon anyone, any player in the league … hopefully, he is OK and he is recovering right now.”

The Oilers ended up defeating the Lightning 3-2. They improved to 8-6-0 while the Lightning fell to 7-5-1. Connor McDavid had a goal an assist. Draisaitl and Warren Foegele scored the other goals for Edmonton. Goaltender Jack Campbell stopped 35 shots to earn the win.

Brandon Hagel and Alex Killorn had the goals for the Lightning. Goaltender Andrei Vasilevskiy made 26 saves in the loss.

NEXT: WATCH: Alex Ovechkin Powers Washington Capitals To Victory Over Edmonton Oilers With Filthy Behind The Back And Through The Legs Assist