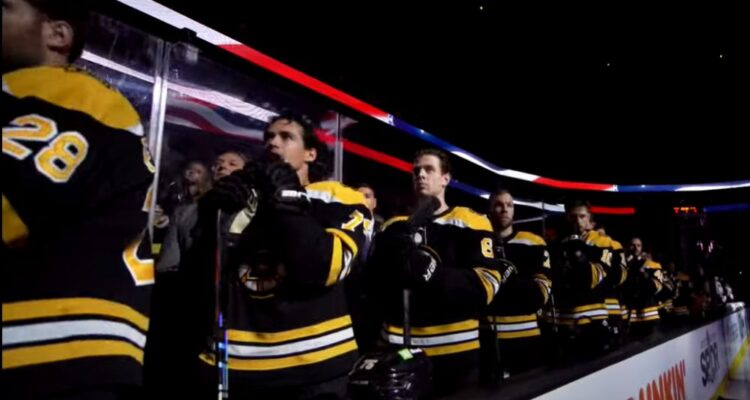 The Boston Bruins announced they parted ways with Mitchell Miller just two days after signing him to an entry-level contract on November 4th.

As part of the signing’s announcement, Miller issued a statement announcing he had apologized for a bullying incident when he was in eighth grade.

Miller stated, “When I was in eighth grade, I made an extremely poor decision and acted very immaturely. I bullied one of my classmates. I deeply regret the incident and have apologized to the individual. Since the incident, I have come to better understand the far-reaching consequences of my actions that I failed to recognize and understand nearly seven years ago.

“I strive to be a better person and positively contribute to society,” Miller continued. “As a member of the Bruins organization, I will continue to participate in community programs to both educate myself and share my mistakes with others to show what a negative impact those actions can have on others.”

“To be clear, what I did when I was 14 years old was wrong and unacceptable. There is no place in this world for being disrespectful to others and I pledge to use this opportunity to speak out against mistreating others,” he concluded.

Back in February of 2022, The Blade reported that Miller “admitted in Lucas County Juvenile Court today to both counts against him — assault and violation the Ohio Safe Schools Act.”

The outlet noted that Miller and his classmate Hunter McKie “were accused of making Isaiah Meyer-Crothers, also 14, eat a candy push pop after wiping it in a bathroom urinal.”

It further reported that “Surveillance video also showed the boys punching and kicking Isaiah, who has developmental disabilities.”

However, the outlet goes on to report that Miller claimed in court that he and McKie discovered a push-pop, took it into the bathroom, wiped it on the top of the urinal, and then offered it to a number of their classmates including a girl named Bailey and a boy named Brady, who both declined to take it.

The two boys then offered it to Isaiah, who accepted it without being forced. After informing Isaiah of what they did, Isaiah chased them into a hallway. It’s there that Miller punched Meyer-Crothers.

In a statement to the court Miller said, “I’m sorry for bringing my family under stress and to my sister for going back to school and having to deal with all the bullying stuff. I didn’t mean to intentionally hurt [Isaiah].”

Magistrate Laura Restivo addressed Miller saying, “It’s our mission to rehabilitate. You are 14 years old. You have a lot of living ahead of you. I think, as your mom said, it’s been a tragic experience you’re going to learn from and move forward from. You will end up being a better person at the end of this.”

At the time of the signing, Bruins President Cam Neely stated, “Representing the Boston Bruins is a privilege we take seriously as an organization. Respect and integrity are foundational character traits we expect of our players and staff.

“Prior to signing Mitchell, our Hockey Operations and Community Relations groups spent time with him over the last few weeks to better understand who he is as an individual and learn more about a significant mistake he made when he was in middle school. During this evaluation period, Mitchell was accountable for his unacceptable behavior and demonstrated his commitment to work with multiple organizations and professionals to further his education and use his mistake as a teachable moment for others,” Neely continued.

“The expectation is that he will continue this important educational work with personal development and community programs as a member of the Bruins organization,” he finished.

Following this announcement, NHL Commissioner Gary Bettman shared this thoughts on the signing saying, “What I understand and I’ve heard through the media and anecdotally what he did as a 14-year-old is reprehensible, unacceptable. Before the Bruins made the decision to sign him we were not consulted. I happened to talk to Cam Neely since the time he was signed. He’s not coming into the NHL, he’s not eligible at this point to come into the NHL.”

“I can’t tell you that he’ll ever be eligible to come into the NHL. If in fact at some point they think they want him to play in the NHL, and I’m not sure they’re anywhere close to that point, we’re going to have to clear him and his eligibility, and it’ll be based on all the information that we get firsthand at the time,” he added.

“So the answer is they are free to sign him to play somewhere else. That’s another league’s issue,” he stated. “But nobody should think at this point he is or may ever be NHL eligible. And the Bruins understand that now.”

When asked what would be needed to have Mitchell become eligible, Bettman answered, “I would need to see a whole bunch of things and understand a lot more firsthand than I do now, anecdotally.”

#NHL Commissioner Gary Bettman on the recent signing of Mitchell Miller by the Boston Bruins. pic.twitter.com/9lOeNSEK5T

First, he stated, “The decision to sign this young man was made after careful consideration of the facts as we were aware of them: that at 14-years-old he made a poor decision that led to a juvenile conviction. We understood this to be an isolated incident and that he had taken meaningful action to reform and was committed to ongoing personal development. Based on that understanding we offered him a contract.”

He then added, “Based on new information, we believe it is the best decision at this time to rescind the opportunity for Mitchell Miller to represent the Boston Bruins. We hope that he continues to work with professionals and programs to further his education and personal growth.”

“We owe it to our fans, players, staff, partners and community to make sure that our practices and protocols are in keeping with the ethos that we demand from ourselves and as an organization. As such, we will be reevaluating our internal processes for vetting individuals who wish to earn the privilege of playing in the National Hockey League for the Boston Bruins.

“We are sorry that this decision has overshadowed the incredible work the members of our organization do to support diversity and inclusion efforts. We will continue to stand against bullying and racism in all of its forms,” he said.

Neely then offered an apology to Isaiah Meyer-Crothers and his family, “To Isaiah and his family, my deepest apologies if this signing made you and other victims feel unseen and unheard. We apologize for the deep hurt and impact we have caused.”

Neely then seemed to imply that the NHL no longer values forgiveness, but instead favors life-time punishment, “Finally, as a father, I think there is a lesson to be learned here for other young people. Be mindful of careless behaviors and going with the group mentality of hurting others. The repercussions can be felt for a lifetime.”

It’s unclear what the new information is, but Meyer-Crothers’ mother has been making the rounds in the press claiming that Miller repeatedly bullied Isaiah for years. She told NBC10 Boston, “As far as I’m concerned, he’s a monster.”

“He told our son that his black mom and dad didn’t love him, that’s why he had white parents,” she claimed. “On a daily basis, was called the N-word. [Miller] would ask Isaiah to sit with him on the bus, and as soon as Isaiah would sit with him, him and his friends would just punch Isaiah in the head nonstop, and all he wanted was friends. So he was an easy target for Mitchell.”

He was named the Player of the Year and Defenseman of the Year after setting league records for goals scored and points by a defenseman.

What do you make of the Bruins decision to part ways with Miller two days after signing him?