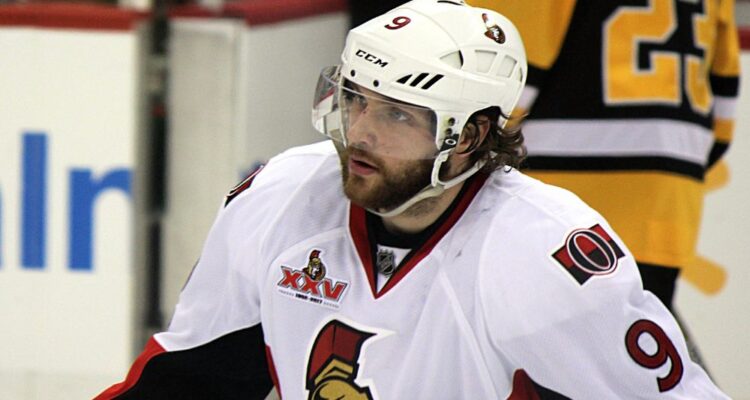 TMZ Sports reported Ryan was seen on CCTV cameras allegedly shoplifting a number of goods from one of the shops in the airport before he eventually abandoned them and entered a nearby bar.

Police confronted him at the bar where they noticed signs of intoxication. Documents obtained by TMZ Reports say he “was not compliant with officers, had slurred speech, bloodshot eyes, and smelled strongly of an alcoholic beverage.”

They also noted, “Ryan was unaware of his location, the day or time and posed a danger to himself.” However, the case was dismissed.

Ryan revealed back in February 2020 that he took a three month absence from the Ottawa Senators to undergo treatment for alcohol abuse. “It’s something I’ve been battling for a awhile,” he told the media at the time. “I’ve tried on my own and I was already getting help for it. What I was doing wasn’t enough. I was trying to white-knuckle things and trying to do things the wrong way.”

He further elaborated, “The issue for me was stopping. I just had never had a period in my life where people were around me to help me really stop.”

“It took me going somewhere to figure that out. And getting a dry period to start out was very beneficial to me,” he added.

Reacting to his recent arrest on Twitter, Ryan wrote, “I’ve had so many incredible messages today. Thank you for all of them. Today is day 1 (again). Mostly embarrassed, but I shouldn’t be. Today I’m waking up and choosing better.”

He followed that up writing, “Every now and again you’re reminded exactly why social media exists and today is such a good reason. Thank you guys all from the bottom of my heart. I hate that I’m here, but it’s where I am and I’ll own that.”

A couple of hours later he tweeted, “If you’re going to really relapse.. you might as well have to travel the next day as well. I hate this, never again.”

Ryan again acknowledged all the support he’s getting from social media and promised to get back to everyone who has messaged him.

He tweeted, “I intend to, and I will write back to every single person who sent me a message. There is over 950 of them, please don’t think I am ducking you. I can’t keep up. But I am absolutely floored and humbled. Thank you all so much, I don’t deserve it. But I will take it.”

In his most recent tweet, Ryan is clearly still struggling.

He wrote, “So yesterday was major denial mixed in with some acceptance and still mostly you’re fine keep going self talk.”

“I think today i am completely ready to say I am done. So majorly powerless over it all, I have to accept that. I’m going to lean on you guys for this ride,” he concluded.

Ryan was drafted as the second overall pick in the 2005 draft by the Anaheim Ducks. He played for the Ducks until the 2013-2014 season where he joined the Ottawa Senators. He was with the Senators until 2020-2021 where he played his final season for the Detroit Red Wings.

What do you make of Bobby Ryan’s response to getting arrested?