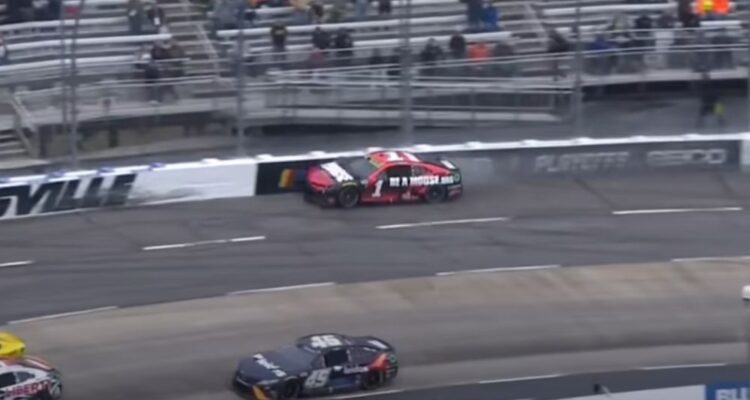 Chastain performed the Hail Melon at Martinsville. On the last lap of the race he put his car into fifth gear, ran up the track, hit the gas, and rode around the wall to cross the line in fifth.

While he didn’t win the race with the move, his finish allowed him to advance to the Championship 4 and race for the NASCAR Cup Series Championship at Phoenix.

RELATED: Kyle Larson Calls Ross Chastain’s Last Lap Move At Martinsville “Embarrassing” And “Not A Good Look For Our Sport” Despite Attempting Similar Move At Darlington

Chastain explained the move following the race, “Well, played a lot of NASCAR 2005 on the GameCube with Chad growing up. And you could get away with it. And I never if it would actually work. I mean I did that when I was eight years old.”

He then relayed, “I grabbed fifth gear, I asked off of two on the last lap if we needed it and we did. I couldn’t tell who was leading and I just made the choice. I grabbed fifth gear down the back and full committed. Once I got against the wall I basically let go of the wheel and just hoped I didn’t catch the turn 4 access gate or something crazy, but I was willing to do it.”

O’Donnell addressed the move during a recent episode of Stacking Pennies with Corey LaJoie saying, “The biggest thing that we got to look at going forward is — I think even if you ask Ross, right, what happened, he made that move, and incredible, the guts it took to do that, but he’d also tell you that it didn’t feel too good either.”

He then questioned, “And so are we going to force guys in that position? Do we want to do that? Or are there some things that we can do particularly on Martinsville that would stop that from happening?”

O’Donnell then stated, “We’ll look at that. I think that’s going to be us with a lot of the race teams and talking about what’s the reality of that happening, at what tracks, and then do we want. A little bit of me kicking the can.”

However, he concluded, “I think you’ll see us react some way to do something, particularly around Martinsville.”

What do you make of O’Donnell’s implication that the Hail Melon move won’t be happening at Martinsville again?