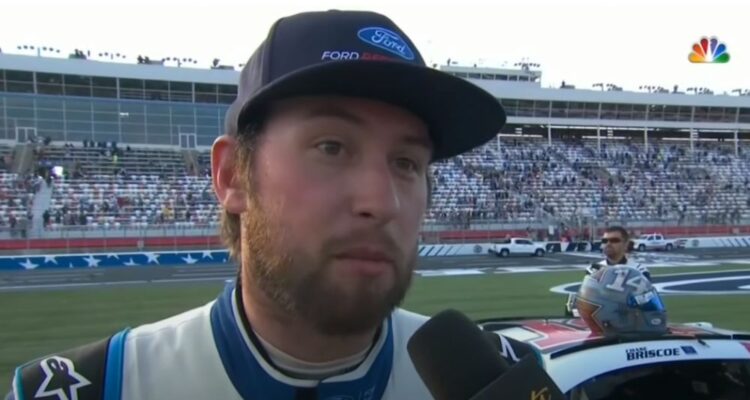 Following Ross Chastain’s wild move that earned him a spot in NASCAR’s Championship Four, Chase Briscoe attempted to recreate it in a video game and failed spectacularly.

On the last lap of the Xfinity 500 at Martinsville Speedway, Ross Chastain put his car in fifth gear, drove up the track, put his foot on the gas, and drove along the wall to go from 10th to finish 5th and secure a spot in the Championship 4.

Before his move, he was two points behind Denny Hamlin and it looked like all hope was lost. Chastain eventually finished fourth after NASCAR disqualified Brad Keselowski for missing weight requirements.

Here’s another look at the move:

This doesn’t even look real 😳

Ross fan, @caleb_matthew21 captured it perfectly…we all had the same reaction!

And here you can see it from Chastain’s in-car camera:

Chastain explained his move following the race saying, “Well, played a lot of NASCAR 2005 on the GameCube with Chad growing up. And you could get away with it. And I never if it would actually work. I mean I did that when I was eight years old.”

He then explained, “I grabbed fifth gear, I asked off of two on the last lap if we needed it and we did. I couldn’t tell who was leading and I just made the choice. I grabbed fifth gear down the back and full committed. Once I got against the wall I basically let go of the wheel and just hoped I didn’t catch the turn 4 access gate or something crazy, but I was willing to do it.”

Briscoe attempted to recreate Chastain’s move in a video game, and it didn’t work. He shared a clip of him entering Turn 3 and going into Turn 4 before his car appears to hit the Turn 4 access gate and wrecking, spinning down the track.

Briscoe captioned the video writing, “We gotta get the realism back into these video games….”

We gotta get the realism back into these video games…. pic.twitter.com/EnyFozYa0I

Chastain will be dueling against Joey Logano, Chase Elliott, and Christopher Bell for the Championship at Phoenix Raceway on Sunday. Coverage begins at 3:00 PM ET on NBC or MRN.

What do you make of Briscoe’s failing at attempting to recreate Chastain’s move?

NEXT: Kyle Larson Calls Ross Chastain’s Last Lap Move At Martinsville “Embarrassing” And “Not A Good Look For Our Sport” Despite Attempting Similar Move At Darlington