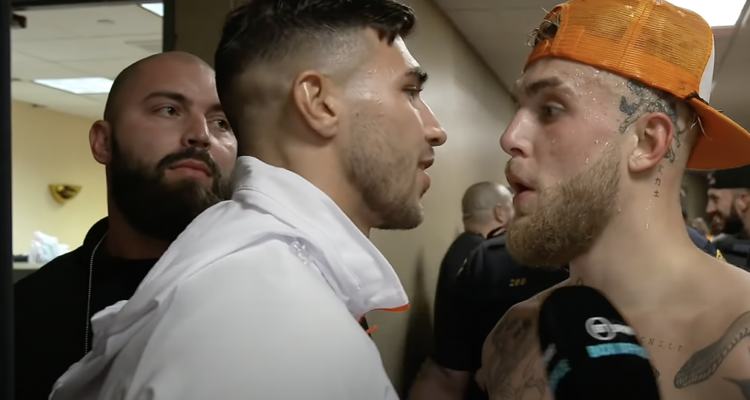 After several highly publicized excuses, cancellations, fallbacks, and back up fights galore, the saga of the much anticipated match between Jake Paul and Tommy Fury might soon reach its conclusion as reports have now confirmed that a deal has been reached for the two to fight on February 25 in Saudi Arabia.

Sources confirmed the news that the deal had been finally reached, after many thought these two fighters would never step into the ring together, to MMA Hours’ Ariel Helwani this week.

However, former UFC fighter and promotor Chael Sonnen doesn’t seem too convinced that this third attempt by the two young boxers is worth much of anyone’s time, or that it may even happen.

“Guys I’m gonna take one crack at this and I’m gonna tell you right now, if Jake Paul fights Tommy Fury, I am out,” Sonnen said in a video posted to his YouTube channel. “That’s not a threat, I’m just letting you know well in advance if that’s the type of news and analysis and information you would like, you’re gonna have to go somewhere else to get it.”

“There’s a rumor going around but there’s an outside chance that it’s false,” he continued. “If this rumor gets confirmed and it turns out Paul and Fury are going to box, no problem, but I’m out. I’m out because first off, I don’t think Fury will show up, and second off, I like Paul.

RELATED: Jake Paul Goes After Nate Diaz By Calling Him A “Street Gangster,” Calls Out Dana White Too

Sonnen continued his praise of the YouTuber turned prize fighter, saying “I like that he’s driven, I like that he can look the world in the eyes telling him he can’t do something and then go out and do it. I like him, and I also think he should be rewarded when he does do that stuff. Anybody else would be. And when he goes out and goes out and gets something done, including if he goes here against Will Fleury and he beats him he’s not going to get credit, he’s not going to get the pat on the back the boxing community is setting him up and I think that’s low.

“So if I don’t think a fights gonna happen but I know full well right it’s a pie there’s a portion of me that doesn’t think it’s gonna happen but the other portion is that if it does happen, what difference does it make? The community is not going to get behind Jake, they’re not going to give him a reward or any kind of credit, it’s going to be just something that we do until we move onto the next one. I don’t think it’s right.

“Whoever is advising him and telling him to do that they’re lying to him. They’re setting him up.”

Tommy Fury already has a history of canceling his fights with Paul. The first time was in 2021 when he canceled due to an undisclosed illness. The next time was in the summer of 2022 when he fell out once against because of an issue regarding travel restrictions preventing him from fighting in the United States.

Tommy Fury’s father and coach, John Fury, told the Mirror yesterday that his youngest son is prepared and ready to face Paul.

“We are ahead of schedule, training hard and looking forward to getting it on,” said Fury Sr. “Do I see Jake Paul as a threat in this fight? No, absolutely not I am seeing him as a heavy bag with arms that is going to get knocked out. We will see what he is made of but unless I see a totally different man come to the ring, he doesn’t have a prayer.”

Paul is currently 6-0 in boxing, where he has faced and defeated MMA legends Anderson Silva, Tryon Woodly, Ben Askren, and former NBA player Nate Robinson. Paul has also recently signed a major deal with the PFL where he will debut in his first MMA fight.

What do you think? Will this fight finally happen or is it destined to get canceled last minute like all the other attempts? Let us know in the comments.

NEXT: Celebrity Boxer Jake Paul Says People Who Voted For Joe Biden And Don’t Regret It “Are The American Problem”