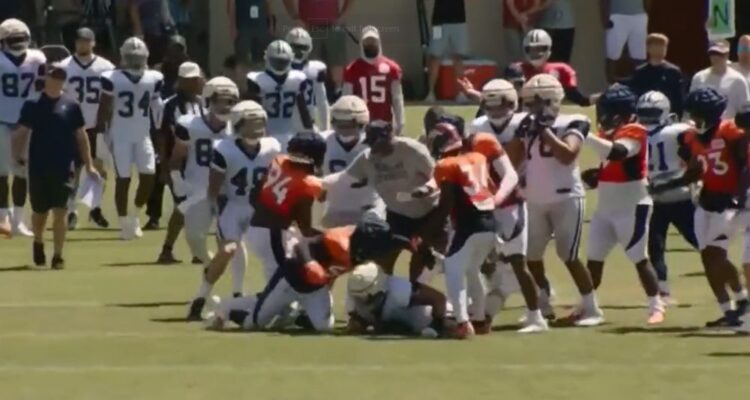 The Dallas Cowboys participated in a joint practice with the Denver Broncos ahead of the teams’ preseason match on Saturday. However, from reports and video footage it appears there wasn’t a lot of practicing actually happening as players from both teams engaged in multiple fights.

The join practice took place at the Broncos’ training camp in Centennial, Colorado and there were numerous people in attendance with Broncos beat reporter Zac Stevens sharing to Twitter a shot of stands full with fans.

Stevens wrote, “MASSIVE crowd for Broncos-Cowboys joint practice. I expect it to be record breaking.”

The two teams definitely gave the fans a show whether or not it was the one they were expecting. Twitter user MexicanCosFan shared video from the camp that sees a fight break out between the two teams.

The footage shows one Broncos player jump on top of a Cowboys player while he’s on the ground and begin throwing right fists. He doesn’t get too many in as a dog pile occurs with players from both teams jumping on each other.

One announcer calling the practice was not surprised at the fight erupting saying, “It was going to happen at some point.”

This wouldn’t be the only fight to erupt during the practice/scrimmage. Another fight shared to Twitter by independent reporter Dov Kleiman shows a Cowboys player shove a Broncos player to the ground and then falling on top of him.

The Broncos player is able roll to the top of the Cowboys player and give him a couple shoves to his helmet, eventually knocking it off. After the players were stood up, both teams stared down each other with some slight pushing and shoving.

Yet another fight between the #Broncos and #Cowboys pic.twitter.com/InOHEdsvXg

According to Broncos beat reporter Zac Stevens, the Broncos dominated the Cowboys in the joint practice. He noted on Twitter that Russell Wilson beat the Cowboys’ defense and Broncos’ linebacker Nik Bonitto beat the Cowboys’ offensive tackles.

He wrote on Twitter, “Denver’s offense had their way with Dallas on the ground. Russell Wilson was sharp in the red zone, but only got FG in move the ball.”

“Denver’s defense dominated, outside of CeeDee Lamb having his way through the air,” he added.

The Broncos beat the Cowboys in many ways on Tuesday

The Broncos and Cowboys will face off in their preseason match on Saturday, August 13th at Empower Field at Mile High in Denver, Colorado. The game begins at 9:00 PM ET and 7:00 PM MT. It will air on NFL Network.

Do you expect more fighting when the two teams face off in their preseason match?

NEXT: The Woke Mob Attacks The Dallas Cowboys For Partnering With Veteran-Owned Black Rifle Coffee Company