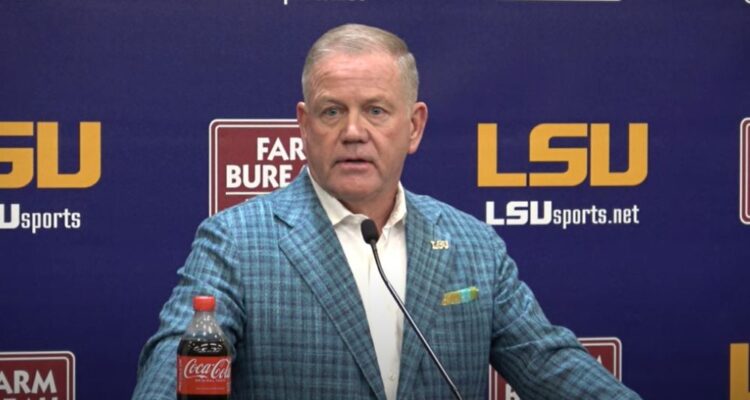 LSU Reporter Snaps At Head Coach Brian Kelly After He Chides Her On Timeliness: “Maybe If You Win, I’ll Be On Time”

Leah Vann, who covers LSU baseball and football for The Advocate, snapped at head coach Brian Kelly after he chided her on her timeliness for a recent press conference.

Kelly opened up the press conference giving about a 3 minute statement about how excited he and the team are to take on Southern University after their loss to Florida State University this past weekend.

He then opened the press conference up to questions stating, “With that we’ll open it up to this late arriving media crowd must have enjoyed the weekend. That’s usually $10 that we put in the kitty. We’ll have a big bash at the end of the year at my place.”

Vann snapped at Kelly saying, “Maybe if you win I’ll be on time then.”

Kelly replied, “I don’t think it has anything to do with winning. I think it has to do with being on time.” He then took the first question about the easiest thing he plans to correct after looking at the game tape following the loss to Florida State.

Vann addressed the exchange between the two on Twitter after another user claimed he would fire her for being unprofessional. She wrote, “Press conference was at noon, I was running from a doctor’s appointment. Got there at 11:57. Brian Kelly called me out, said jokingly I owed him $10, I said if he won maybe I’d be on time.”

“Not my finest hour. I apologized afterward, he was super chill and said I still owe him $10,” she added.

In a subsequent tweet she added, “I know Brian Kelly likes to joke. He clearly took it as one from our conversation afterward. All in good fun, fam.”

While Vann notes the two were friendly after the verbal sparring, she’s not the only one to call out Kelly. Former Notre Dame quarterback Phil Jurkovec, who now plays for Boston College, said Kelly lied to his parents, criticized his ability to coach, as well as called his character into question.

He also added, “It wasn’t as much about how they treated people — because I think they also treated people very badly, very poorly, some of the coaches there — but it was more about their lack of experience and coaching.”

LSU is heavily favored to defeat Southern University with oddsmakers having LSU as a 47.5 point favorite. The over under line for the entire game is 58 points.