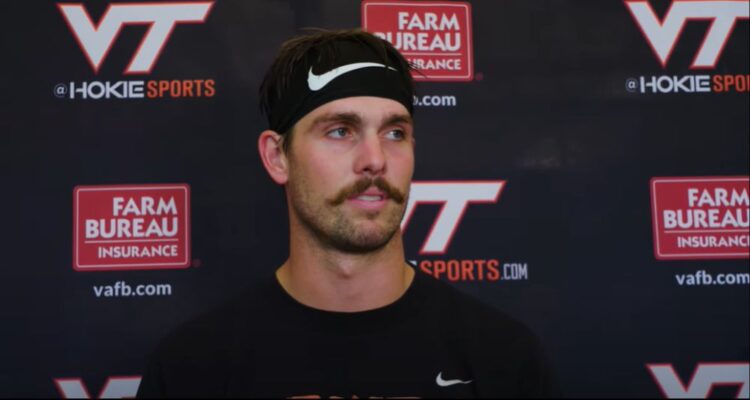 Following the 20-17 loss, Old Dominion University fans rushed the field. One of the first students to get onto the field was met by Blumrick who lowered his right shoulder and checked the fan in his chest. The impact knocked the fan’s glasses and hat off of his head. It also sent him tumbling down onto the ground.

Blumrick issued an apology for his actions on Twitter writing, “I would like to sincerely apologize to ODU and Hokie Nation for my actions after last night’s game.”

He continued, “Following an emotional loss, in trying to get to the locker safely, there was an incident including contact between myself and a fan, that I regret. This is not an accurate reflection of my character and I am truly sorry to those I have let down including my coaches, teammates and fans.”

“He felt like he wanted to come out publicly and do something,” Pry concluded. “And I advised him to wait ’til the morning.”

Blumrick transferred to Virginia Tech from Texas A&M for the 2021 season as a junior. He was originally a quarterback, but has since transitioned to a tight end under Coach Pry’s first season as the head coach of Virginia Tech.

The game begins at 8 PM ET and will be broadcast on the ACC Network via ESPN with radio coverage on the Virginia Tech Sports Network.

What do you make of Blumrick’s apology and Pry’s comments to the media regarding his apology?