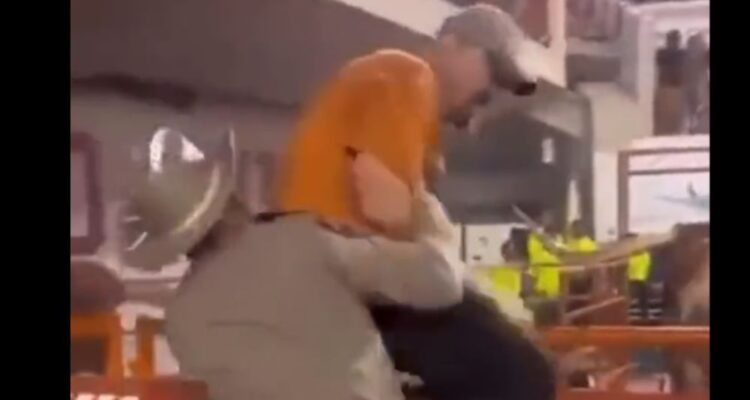 Spectator arrested by police after trying to sneak into Bevo's corral

WATCH: Officer Drags Man Onto Ground Who Was Attempting To Sneak Into The Corral Of The Texas Longhorns’ Mascot

A police officer hauled a man to the ground who was attempting to sneak into the corral of the Texas Longhorns’ mascot, Bevo.

Video shows handlers of the Texas Longhorns’ mascot, Bevo, repeatedly telling a man to vacate the area. The man responds to one of the handlers seemingly attempting to explain what his plan was.

However, the handlers aren’t having any of it and continue to tell him to get out of the corral. The man ignores their commands and appears to be about to fully enter the corral when a police officer comes up from behind him and hauls him down off the corral and throws him into the ground.

The police report indicated the man was charged with one count of criminal trespass.

It’s probably for the best that the man was arrested by police given Bevo is a 5-year-old steer that weighs 1,700 pounds.

During the Sugar Bowl in 2019, Bevo broke out of his corral and nearly ran over the University of Georgia’s mascot during an arranged showdown between the two mascots.

As soon as Uga, Georgia’s mascot, was out of his crate and facing off against Bevo, Bevo showed who was boss as he charged out of the makeshift corral making a beeline for Uga.

The Texas Longhorns ended up defeating the UTSA Roadrunners 41 to 20. Texas QB Hudson Card threw 15 for 23 for 161 yards and one touchdown.

Jordan Whittington led the team in receiving yards with 4 catches for 56 yards. Johnson had three catches for 23 yards and touchdown.

What do you make of police hauling this man down before he could fully enter Bevo’s corral?

NEXT: University Of Oregon Apologizes For “F*** The Mormons” Chant During Saturday’s Game Against BYU