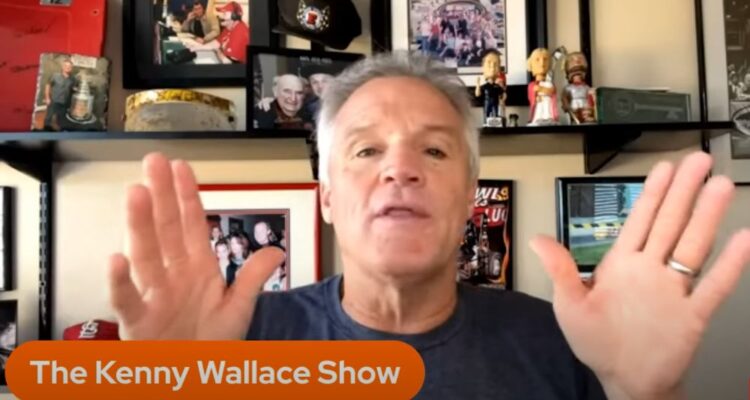 Kenny Wallace Tells The Truth On NASCAR: “This New Car Is Hurting Drivers, It’s Ending Their Careers, And It’s Putting Them In The Hospital”

In a recent video upload reacting to Kurt Busch’s decision to step away from NASCAR in the short term, Wallace excoriated NASCAR’s new Next Gen car.

Busch made his announcement ahead of the South Point 400 at Las Vegas Motor Speedway. He shared a lengthy statement revealing he still has not been cleared by doctors to return to the driver’s seat.

He wrote, “The doctor have come to the conclusion that it is best for me to ‘shut it down’ for this season. Even though I have made solid gains since I have been working with top specialists, and the team at Toyota Performance Center, I’m still not 100% and I’m still not cleared to compete.”

Busch then announced, “As I continue to focus on my health and work towards being cleared, I will be stepping away from full-time NASCAR Cup Series competition in 2023.”

Later in the statement, Busch said, “I’m still competitive, passionate, and I want to continue to perform at my core values, and to give back to a community that has been my life since I left Las Vegas to pursue a professional racing career over 22 years ago.”

“Next year my contributions to racing may look a little different, but I will continue to give my best to this sport. And, if I’m cleared, maybe you’ll see me at select races,” he concluded.

Reacting to Busch’s announcement, Wallace said in his video, “I want to get down to the real deal. I want to cut through the bulls**t and I’m a little upset about this so I’m going to try to talk slow.”

He then questioned, “Why is Kurt hurt? It’s because this new car, this Next Gen car. I listened to all the media this week and, you know, they’re dancing around because they don’t want NASCAR to get mad at them.”

So here’s the elephant in the room, I’m gonna say it right like this. This new car is hurting drivers, it’s ending their careers, and it’s putting them in the hospital. The examples are everywhere,” Wallace declared.

“Now, will Alex Bowman be back? Because he just announced he probably ain’t coming back,” Wallace said. “He’s out for another three races. Well, I guess he’s done because we ain’t got but a little bit to go . We’re down to the real deal here. We’re almost down to the final four. I mean this is it.”

Hendrick Motorsports announced on October 12th that Alex Bowman would miss the next three races as he recovers from a concussion.

The press statement read in part, “Alex Bowman will not compete in the next three NASCAR Cup Series races as he recovers from a concussion suffered in a Sept. 25 accident at Texas Motor Speedway.”

Hendrick Motorsports General Manager and President Jeff Andrews stated, “Our priority continues to be Alex’s recovery and long-term health, and we will follow the plan that Dr. Collins and his team recommend. We’re not looking past the next three races and will evaluate plans for the season finale (at Phoenix Raceway) as the event approaches.”

Bowman shared his own statement to Twitter. It reads, “As much as I hoped to be back in the No. 48 Ally Chevrolet this weekend, I will not be returning to competition for the next three NASCAR Cup Series races. I am continuing to focus my efforts on getting my health back to 100% so that I can return racing as soon as possible.”

He added, “I know that Noah will continue to do a great job representing the No. 48 and I’ll be cheering him and the entire Ally Racing team on every lap. Thank you again to everyone for the support I’ve received. It means so much to me.”

He then questioned, “Has it ended Alex Bowman’s career? Who knows. It’s hurt other drivers. Now, here’s why…NASCAR wants everybody’s cars the same because everybody was screaming, you know, it’s that new thing, ‘I want everything fair! I want everything.’ Everybody’s got to be the same which is bullcrap. You should let the teams, the drivers…

“So when you want everything the same that means everybody’s car has to be the same. The way to make everybody’s cars the same is to make the car strong so it doesn’t flex anywhere, right? So you’ve go to measure the car everywhere. That’s what’s hurting the drivers. These cars are so strong,” Wallace asserted.

RELATED: Kyle Petty Doesn’t Buy Bubba Wallace’s Apology, Calls For A Stronger Suspension: “He Should Have Been Suspended For The Rest Of The Year”

He then made a comparison with a bridge, “At least a bridge flexes, right? A bridge, you go over a river, it flexes. We all feel it. This car don’t flex at all. I mean Alex Bowman’s wreck was like what? He goes down into turn three. He spins out, not even all the way around, spins and his ass end of his car goes pop and he’s out the rest of the year?”

Wallace continued, “The ass end of these Next Gen cars, the rear bumpers are so strong because I guess there are a lot of pickup points that NASCAR wants to measure. The height of the spoiler, the width of the car. So they don’t want anything to bend in the back. They forgot about the driver.”

He would go on to point out that numerous drivers including Denny Hamlin and Kevin Harvick were waving red flags about the safety of the car at the beginning of the year before the Daytona 500. Wallace also rebuked the ludicrous idea that drivers should accept the fact that their careers could be ended in the car and that they could even die.

After addressing those points Wallace notes, “We still got all these races to go, not a lot, but enough, at race tracks where we could lose some more drivers to head injuries.”

He then stated, “Let me explain the head injuries. Your brain floats in liquid, right? When you hit hard the brain smashes up against your skull. Like a boat in the water and it hits and that is what you call a concussion. Your brain swells up and all of a sudden you’re not right. So because your brain floats in liquid, smashes up against your skull, it takes you down, puts you out.”

Wallace then declared, “I’ve said it once and I’ll say it again. NASCAR’s got a lot on their hands. This new car, I think it’s good for competition and it’s bad for the drivers.”

What do you make of Wallace’s thoughts on the Next Gen car?