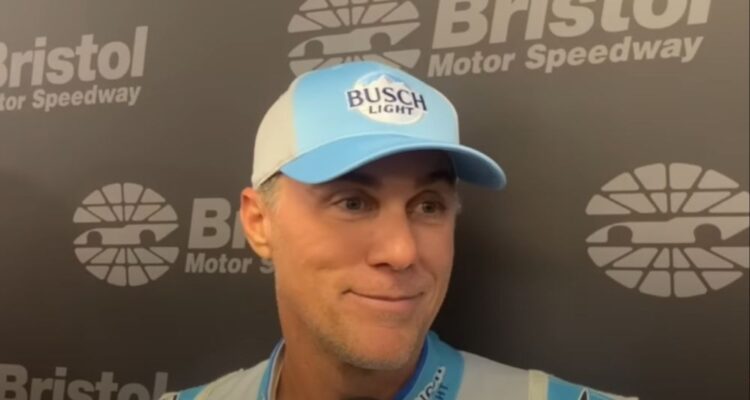 Kevin Harvick, the driver of the No. 4 Stewart-Haas Racing Ford Mustang, recently shared his thoughts about NASCAR’s suspension of Bubba Wallace following his actions during the South Point 400 at Last Vegas Speedway.

Wallace intentionally wrecked Kyle Larson after he was squeezed up the track and drove himself into the outside wall.

It all started when Larson got a huge run coming into Turn 3 and dove to the inside of both Kevin Harvick and Bubba Wallace. Harvick backed out of the situation and allowed Wallace and Larson to race through the corner. Larson’s car got loose and he began drifting up the track squeezing Wallace ever closer to the outside wall. However, he never makes contact with Wallace and as they are coming out of Turn 4, Wallace slams the wall hard.

After hitting the wall, he bounced down into Larson’s car. Larson then dived to the inside of the track to avoid Wallace. Wallace chased him down the track and intentionally hit him in the right rear quarter panel.

After wrecking Larson, Wallace then exited his vehicle, walked down the race track and confronted Larson by repeatedly shoving him into his car.

Larson never retaliated and attempted to deescalate the situation by moving away from Wallace.

After confronting Larson, Wallace then made his way to pit road where he fist bumped his pit crew.

On his way to pit road he was also seen shoving a NASCAR official who appeared to be instructing him to enter an ambulance so he could be transported to the infield care center for examination following the wreck.

NASCAR suspended Wallace for his actions on the race track, announcing he would be suspended for the upcoming race at Homestead-Miami Speedway.

NASCAR’s Chief Operating Officer Steve O’Donnell explained on SiriusXM NASCAR Radio, ““Our actions are really specific to what took place on the racetrack. And when we look at how that incident occurred, in our minds, a really dangerous act. We thought that was intentional and put other competitors at risk. And as we look at the sport and where we are today and where we want to draw that line going forward, we thought that definitely crossed the line and that’s what we focused on in terms of making this call.”

Wallace’s team, 23XI Racing, concurred with the ruling issuing the following statement, “23XI is aligned with NASCAR on the one-race suspension issued to Bubba and we understand the need for the series to take a clear stand on the incidents that took place at Las Vegas Motor Speedway. ”

“As a result of the penalty, John Hunter Nemechek will drive the No. 45 Toyota this weekend at Homestead-Miami Speedway,” the statement concluded.

Kevin Harvick shared his thoughts regarding the suspension on Twitter.

He wrote, “Intentionally hooking people in the RR should never be acceptable. Protect us from ourselves. I hope this is the beginning of the end of it happening.”

In a follow-up tweet, Harvick wrote, “I’ve been guilty of several of these instances you see happening but I also had an iron fist of Mike Helton waiting for me after I’d acted like a fool.”

“I believe an iron fist is needed going forward and that will trickle down,” he concluded.

What do you make of Kevin Harvick’s comments on Bubba Wallace’s one-race suspension?